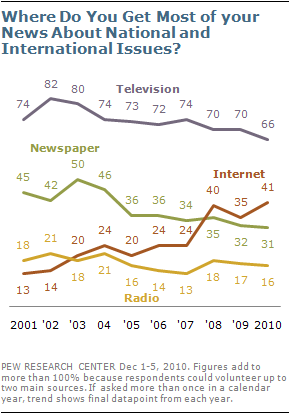 The national survey by the Pew Research Center for the People & the Press, conducted Dec. 1-5, 2010 among 1,500 adults reached on cell phones and landlines, finds that more people continue to cite the internet than newspapers as their main source of news, reflecting both the growth of the internet, and the gradual decline in newspaper readership (from 34% in 2007 to 31% now). The proportion citing radio as their main source of national and international news has remained relatively stable in recent years; currently, 16% say it is their main source.

An analysis of how different generations are getting their news suggests that these trends are likely to continue. In 2010, for the first time, the internet has surpassed television as the main source of national and international news for people younger than 30. Since 2007, the number of 18 to 29 year olds citing the internet as their main source has nearly doubled, from 34% to 65%. Over this period, the number of young people citing television as their main news source has dropped from 68% to 52%. 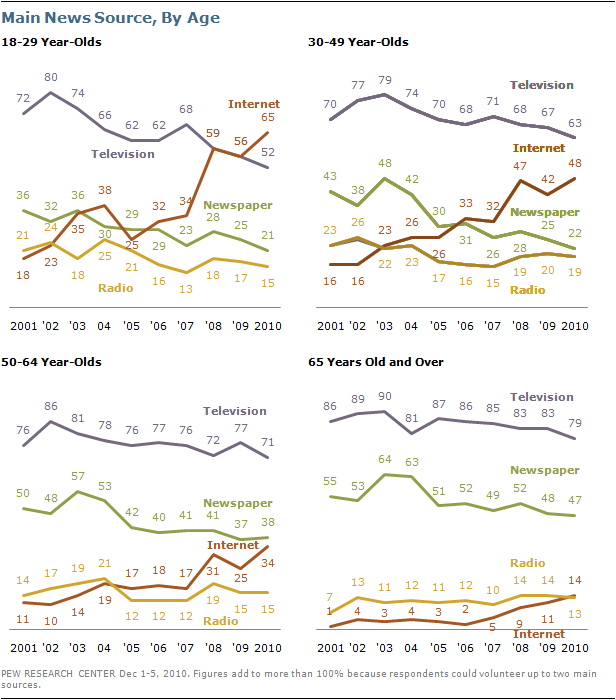 The internet also has grown as a news source for people ages 50 to 64; currently 34% say the internet is their main source of national and international news, nearly equal to the number who cite newspapers (38%), though still far below television (71%). There has been relatively little change in the how people age 65 and older get their news. The internet has risen to 14% from 5% in 2007, but is still far behind newspapers (47%) and television (79%) as a main source. 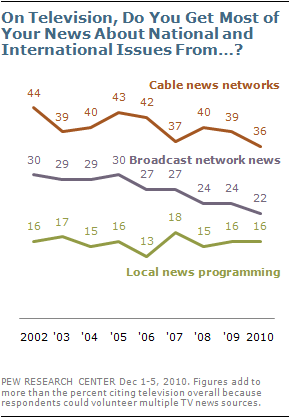