As the 150th anniversary of the start of the 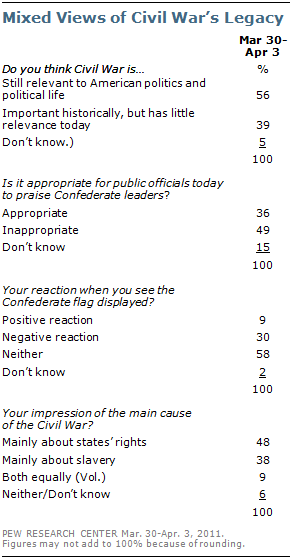 Civil War approaches, most Americans say the war between the North and South is still relevant to American politics and public life today.

More than half of Americans (56%) say the Civil War is still relevant, according to the latest national survey by the Pew Research Center for the People & the Press, conducted March 30-April 3 among 1,507 adults. Nearly four-in-ten (39%) say the Civil War is important historically but has little current relevance.

In a nation that has long endured deep racial divisions, the history of that era still elicits some strong reactions. Nearly half of the public (49%) says it is inappropriate for today’s public officials to praise the leaders of the Confederate states during the war; 36% say such statements are appropriate.

There is no consensus among the public about the primary cause of the Civil War, but more (48%) say that the war was mainly about states’ rights than say it was mainly about slavery (38%). Another 9% volunteer that it was about both equally. 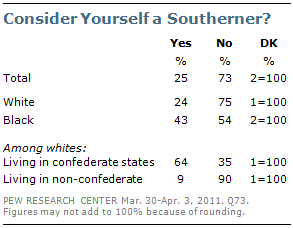 On some, but not all, issues relating to the Civil War, the views of whites who identify as Southerners differ significantly from those who do not.

About a quarter of all whites (24%) consider themselves Southerners; 75% do not.

Nearly half of self-described Southern whites (49%) see states’ rights as the war’s main cause; among whites who do not consider themselves Southerners, a comparable percentage (48%) also says states’ rights was the war’s main cause. However, self-described Southern whites are more likely than other whites to view praise by politicians for Confederate leaders as appropriate and to have a positive reaction to displays of the Confederate flag. 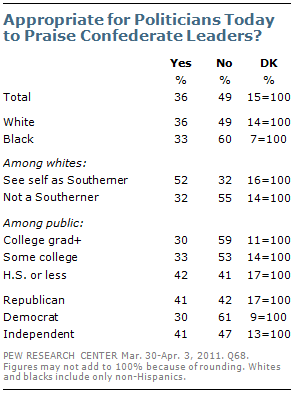 The public expresses a less positive view of politicians praising Confederate leaders than it did a decade ago. In a January 2001 Gallup survey, 50% said they thought it was appropriate for public officials to praise the leaders of the Confederate states in the Civil War; 40% said such praise was inappropriate.

In the new survey, more think that politicians’ statements praising Confederate leaders are inappropriate rather than appropriate (by 49% to 36%).

About six-in-ten (59%) among those with at least a college degree also say praising leaders of the former Confederate states is inappropriate, while 30% say they do not have a problem with that. Those with a high school diploma or less are divided (42% appropriate, 41% inappropriate). 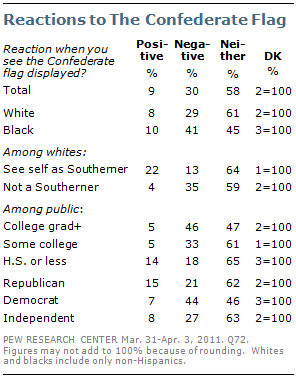 Nearly half of those with at least a college degree (46%) say they have a negative reaction to the display of the Confederate flag, compared with a third (33%) of those with some college experience and just 18% of those with a high school diploma or less.

There also are partisan differences in reactions to the flag: about twice as many Democrats (44%) as Republicans (21%) react negatively to displays of the Confederate flag. And Republicans are more likely than Democrats to have a positive reaction to the flag (15% vs. 7%).