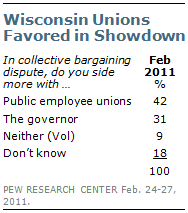 By a modest margin, more say they back Wisconsin’s public employee unions rather than the state’s governor in their continuing dispute over collective bargaining rights. Roughly four-in-ten (42%) say they side more with the public employee unions, while 31% say they side more with the governor, Scott Walker, according to the latest Pew Research Center survey, conducted Feb. 24-27 among 1,009 adults. 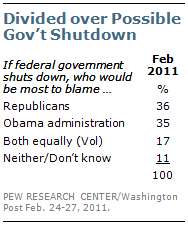 administration and 17% volunteer that both would be to blame. This question was asked jointly by the Pew Research and The Washington Post.

Opinions are notably different today than they were the last time a budget battle threatened a government shutdown. In November 1995, a Washington Post/ABC News survey asked a similar question and found that 46% said a possible government shutdown would be mainly the Republicans’ fault; just 27% said the bulk of the blame would fall on the Clinton administration.

The differences in opinions between now and then may well be more linked to changes in views of the GOP House Speaker rather than the Democratic president. Obama’s current approval rating of 49% is about the same as Bill Clinton’s in October 1995 (48%). 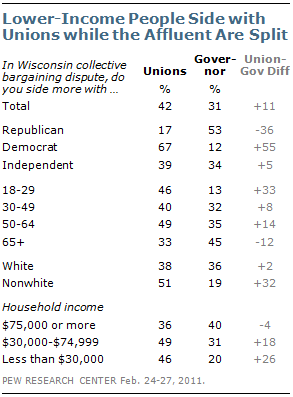 While whites are nearly evenly divided (38% unions, 36% governor), non-white people are much more likely to say they side more with the unions that represent public employee workers (51% vs. 19%). 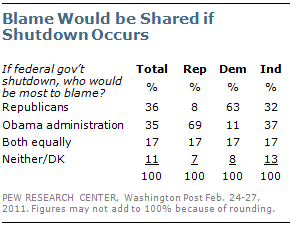 Looking at the possibility of a federal government shutdown if Republicans and the Obama administration cannot agree on a budget, partisans on both sides would put the bulk of the blame on the opposing party.

In early January 1996, with the government in a partial shutdown, the public continued to put more blame on the Republicans, according to a second ABC News/Washington Post survey. At that point, a plurality (44%) said the GOP was mainly to blame for the shutdown, while 25% said the Clinton administration was mainly to blame and 24% blamed both sides.

More Side with Wisconsin Unions than Governor
OverviewDemocrats, Young, Less Affluent Side Strongly With UnionsPartisan Divide on Potential Blame for Federal Shutdown
About the Survey