Since 9/11, there have been major terrorist attacks in Great Britain, Spain and other countries. And in the United States, there have been Orange Alerts and numerous near misses involving bombs smuggled aboard aircraft and in parked cars. 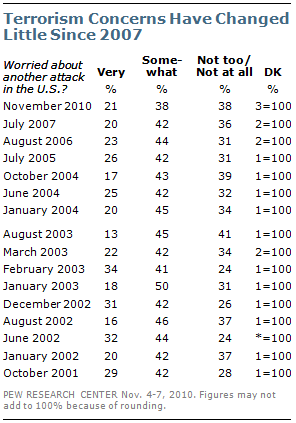 But over the course of all of this, there is little evidence that close calls in this country or terrorist attacks overseas have led to a fundamental change in the public’s worries about terrorism.

A recent national survey by the Pew Research Center for the People & the Press, conducted Nov. 4-7 among 1,255 adults, finds that 59% say they are very (21%) or somewhat (38%) worried there will soon be another terrorist attack in the United States.

This is little changed from July 2007 (20% very, 42% somewhat worried). In fact, looking back over nearly a decade, the public’s worries over another attack have been fairly steady, with a few exceptions. In June 2002, following the arrest of Jose Padilla, an American accused of planning a “dirty bomb” attack on the U.S., the percentage saying they were very worried about an attack jumped to 32% from 2o% six months earlier. But by August 2002, just 16% said they were very worried.

The latest Pew Research survey was conducted shortly after reports of an aborted plot to smuggle package bombs aboard cargo jets destined for the United States. The survey was conducted before the most recent terrorist scare – the arrest of a Somali-born man in Portland, Oregon who allegedly had sought to detonate a bomb at a Christmas tree-lighting ceremony.

The survey finds the public is divided over whether the U.S. is winning or losing its campaign against terrorism around the world: 38% say the United States is winning, while about the same number (43%) say it is losing. This also is little changed from 2007. 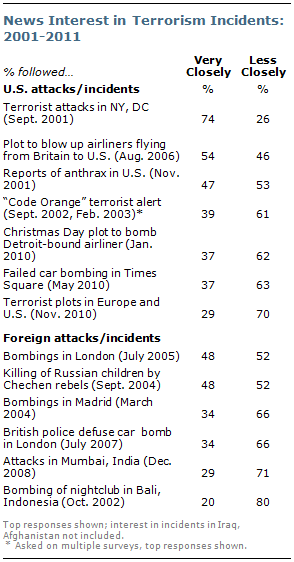 Of the many terrorist incidents since the 9/11 attacks, the one that attracted the greatest public interest was the attempt to blow up multiple airliners travelling from Great Britain to the United States and Canada in August 2006. More than half of Americans (54%) followed that story very closely. Interest in that story also surpassed interest in terrorist attacks overseas since 2001, including the attacks on London subways and buses in July 2005 (48% very closely).

Notably, while the airliner plot of 2006 and the London attacks of 2005 attracted widespread interest, the public’s concerns about the prospect of a new terrorist attacks in this country rose only modestly in the wake of each incident. The August 2006 survey was being conducted as news broke about the transatlantic airliner plot: In interviewing conducted before the plot became public, 17% said they were very concerned about another attack on the United States; afterward, 25% said they were very worried. (See “American Attitudes Hold Steady in Face of Foreign Crises,” August 17, 2006.) 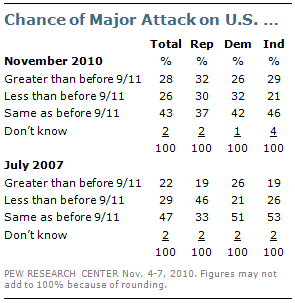 These views, like concerns about the possibility of a new attack, have shown little overall change since 2007. However, about as many Republicans now see a greater terrorist threat as a reduced threat (32% vs. 30%). In July 2007, 46% of Republicans said the threat was less than it had been at the time of 9/11 while just 19% said it was greater. Opinions among Democrats have shown less change, though somewhat more see a reduced terrorist threat than in 2007 (32% vs. 21%).

Divided Views of Struggle Against Terrorism

Public opinion about the country’s campaign against terrorism around the world is divided; 38% say the United States is winning, while about the same number (43%) say the nation is losing the campaign. This i 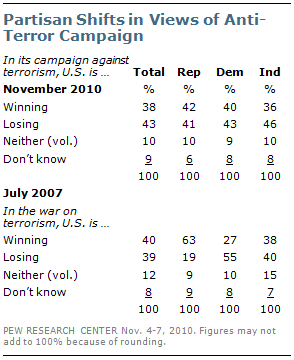 s similar to public sentiment in the summer of 2007, when 40% said the U.S. was winning the war on terrorism and 39% said the country was losing it.

Today, there is little difference in the opinions of Republicans, Democrats and independents, with opinion divided in all three partisan groups. By contrast, although overall opinion was similar in 2007, there were significant partisan differences three years ago: By a ratio of more than three-to-one (63% vs. 19%) Republicans said the country was winning rather than losing the war on terrorism, while Democrats were about twice as likely to say the country was losing (55%) rather than winning (27%) the war.