Compared with previous changes in the balance of power in Congress, Americans are expressing a muted reaction to the GOP victories this year. Just under half (48%) say they are happy the Republican Party won control of the House, while 34% are unhappy. By contrast, after the Democratic Party’s victories in 2006, 60% of Americans said they were happy the Democrats had gained control of Congress, while just 24% were unhappy. Similarly, when Republicans 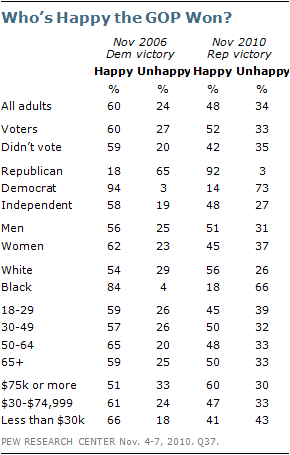 Reflecting their more conservative leaning overall, Americans who voted in this year’s midterms offer more positive assessments of the GOP than those who did not vote. Among voters, 52% are happy the Republicans won control of the House, and 45% approve of their policies and plans for the future. By comparison, 42% of non-voters are happy Republicans won, and just 35% approve of their agenda.

While, on balance, more Americans are happy than unhappy about the Republican House victory, the public is divided almost evenly over whether they approve (41%) or disapprove (37%) of the Republican policies and plans for the future. This stands in contrast to much broader approval of the Democratic Party’s agenda four years ago; following the 2006 election, 50% approved and just 21% disapproved of the party’s policies 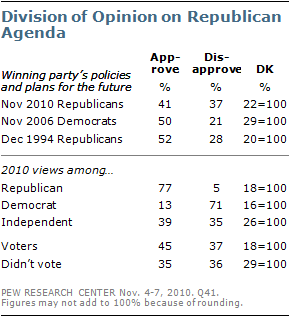 and plans. Similarly, following the Republican Party’s victory in 1994, 52% of Americans said they approved of what the party was proposing, while 28% disapproved.

Americans who voted are somewhat more supportive of the GOP’s policy agenda – 45% approve of their policies and plans, compared with 35% among adults who did not vote. Independents are divided in their take on the Republicans, with 39% approving of the party’s agenda, 35% disapproving, and 26% uncertain. 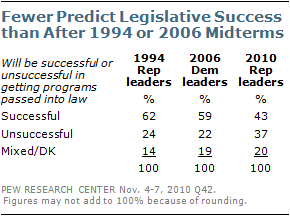 The public is divided about how the new House Republican leaders will do in getting their programs passed into law; 43% believe they will be generally successful, 37% unsuccessful. This is a more guarded assessment than in past midterms when one party won majorities in both the House and Senate. After the Republican victories in 1994, 62% felt they would be successful in pursuing their agenda, just 24% unsuccessful. Following the Democrats’ victories in 2006, 59% thought they would be generally successful, 22% unsuccessful. 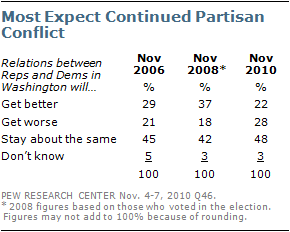 While they differ on how effective GOP leaders will be, Republicans and Democrats are equally skeptical about the chances of party relations improving. Just 23% of Republicans, 22% of Democrats and 23% of independents think relations between the parties will get better in the coming year. The plurality view across party lines is that relations will stay about the same as they are now.

This stands in contrast to the optimism Democrats expressed following Barack Obama’s election as president in 2008. Immediately following that outcome, 57% of Democrats who said they voted in the election thought relations between Republicans and Democrats in Washington would get better. Roughly a third (34%) of independent voters were optimistic about improved relations, while only 17% of Republican voters thought relations would improve. 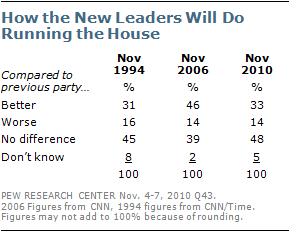 Just one-in-three (33%) Americans believe the Republicans will do a better job running the House of Representatives than the Democrats did, while nearly half (48%) think there won’t be much difference and 14% say they will do a worse job. This is roughly the same balance of opinion expressed following the Republicans’ 1994 victory. The public was more optimistic about how Democrats would do following their 2006 win. In a November 2006 CNN survey, 46% said the Democrats would do a better job of running the House than Republicans had been doing.

Who Should Take the Lead? 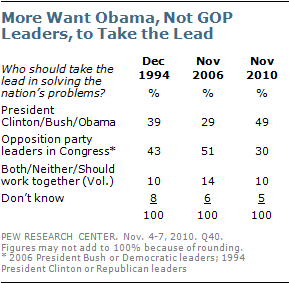 Obama’s job approval rating is much higher today than Bush’s was after the 2006 election. Currently, 44% of the public approves of Obama’s job performance while the same percentage disapproves. In November 2006, just 32% approved of Bush’s job performance, compared with 58% who disapproved. 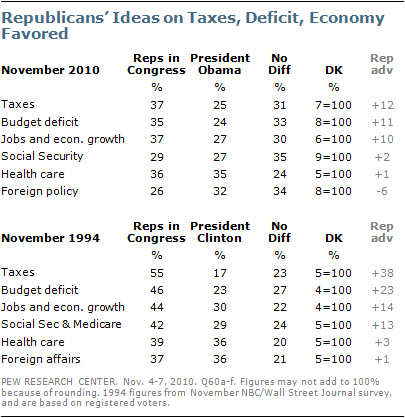 The Republican advantages on these key issues are substantially narrower than the ones they enjoyed in the wake of the 1994 midterm election. In a November 1994 NBC/Wall Street Journal survey, Republicans held and overwhelming advantage over Clinton in terms of having better ideas on taxes (55% vs. 17%), the budget deficit (46% vs. 23%) and dealing with jobs and economic growth (44% vs. 30%). 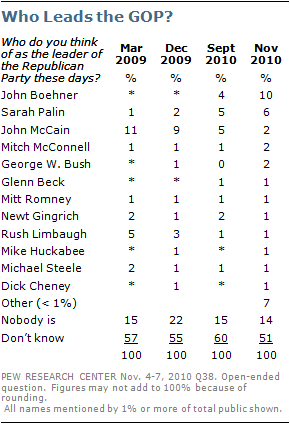 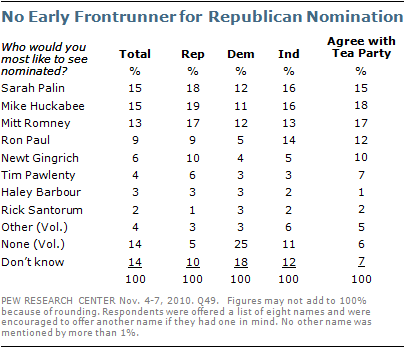 When asked who they would most like to see nominated as the Republican Party’s candidate for President in 2012, roughly equal numbers choose Sarah Palin (15%), Mike Huckabee (15%) and Mitt Romney (13%). Another 9% say they would like to see Ron Paul nominated, 6% Newt Gingrich, 4% Tim Pawlenty, 3% Haley Barbour, and 2% Rick Santorum.

Most Americans (56%) say they would like to see other Democratic candidates challenge Barack Obama for the Party’s nomination for president in 2012, while 38% say they would not. This is substantially less support for an intra-party challenge than in December of 1994, when 76% said they would like to see a Democrat challenge Bill Clinton for the 1996 nomination. Democrats, in particular, have different feelings today compared with 1994. Then, Democrats supported seeing someone challenge Clinton by a 66% to 30% margin. Today, they oppose a challenge to Obama’s nomination by a 62% to 34% margin.

Next: Section 2: Views of the Parties, Prospects for Compromise
← Prev Page
Page1You are reading page2Page3Page4Page5Page6
Next Page →

Mixed Reactions to Republican Midterm Win
Section 1: Reactions to the GOP Victory
Modest Expectations for GOPWho Should Take the Lead?Boehner More VisibleLooking Ahead to 2012
Section 2: Views of the Parties, Prospects for Compromise Section 3: Voters and Nonvoters Differ on Key Policies Section 4: Campaign Outreach About the Surveys