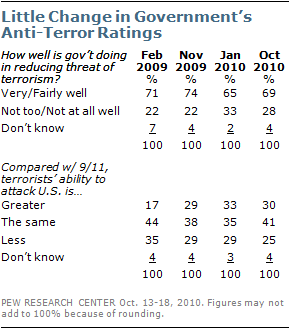 The federal government continues to get positive marks for efforts to reduce the threat of terrorism, but many Americans say luck is a big reason why the United States has not suffered a major attack at home since Sept. 11, 2001.

About seven-in-ten (69%) say the government is doing very (15%) or fairly well (54%) in reducing the threat of terrorism, numbers that have changed only slightly since January. Still, 30% say the ability of terrorists to attack the U.S. is now greater than it was on 9/11, while 41% think it is about the same. Just a quarter (25%) say the ability of terrorists to attack is less now than it was in 2001. These numbers also are little changed since the start of the year.

The latest national survey by the Pew Research Center for the People & the Press, conducted Oct. 13-18 among 2,251 adults, finds that the public continues to be divided over why there has 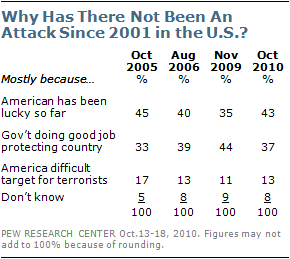 Currently, nearly half (47%) say the government’s anti-terrorism policies have not gone far enough to protect the country, while about a third (32%) say those policies have gone too far in restricting civil liberties. 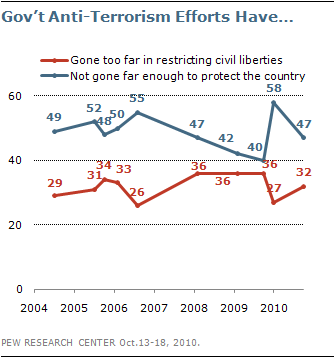 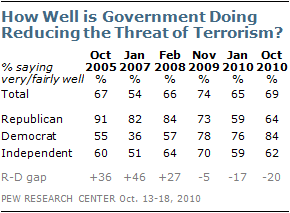 During the Bush administration, the partisan gap was reversed. In February 2008, 84% of Republicans and 57% of Democrats expressed positive views of the government’s anti-terror efforts; the partisan differences were even larger (46 points) in January 2007.

Independents’ views of the government’s performance in reducing the threat of terrorism have shown less change since the Bush administration. Currently, 62% say the government is doing very or fairly well, compared with 70% last November and 64% in February 2008.

There also have been partisan shifts in other attitudes and perceptions related to terrorism. Currently, 50% of Republicans mostly credit luck, rather than effective government policies (37% of Republicans), for why there has not been another attack since 2001. Among Democrats, 44% say it is mostly because of government policies while about as many (35%) say it is because the country has been lucky so far.