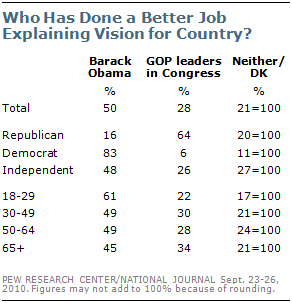 With just over a month to go before the midterm elections, the public by a wide margin says Barack Obama has done a better job than Republican congressional leaders in explaining his plans and vision for the country.

Half (50%) of the public says Obama has done a better job, compared with just 28% who say GOP leaders have done better in laying out their plans and vision, according to the latest Pew Research/National Journal Congressional Connection poll, sponsored by SHRM, conducted September 23-26 among 1,010 adults.

The poll also finds that the public remains highly critical of Congress, though they judge their own lawmaker’s performance less harshly. Obama’s job performance ratings remain better than those for Congress, but are little changed since June. The public also continues to show limited confidence in the government in Washington to make progress over the next year on the most important problems facing the country. 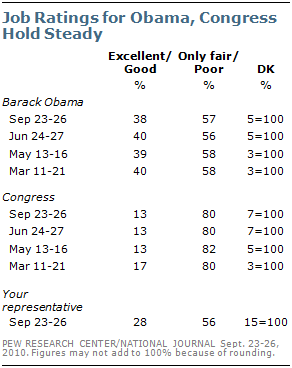 Job performance ratings for Obama and for Congress have fluctuated only slightly through much of this year. Currently, nearly four-in-ten say Obama’s performance has been either excellent (10%) or good (28%), while 57% rate it as only fair (30%) or poor (27%). 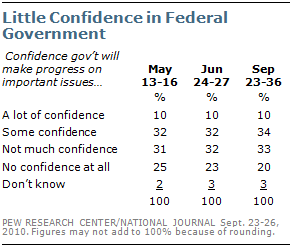 There is little change among partisans or independents since June. Currently, 73% of Republicans say they have not much (44%) or no confidence (28%) at all that the government will make progress over the next year; 76% said this in June. Nearly a quarter (24%) say they have a lot (3%) or some confidence (21%) that the government will make progress; 23% said this in June. 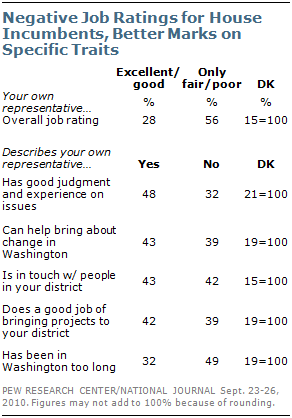 In another sign of the broad anti-incumbent sentiment that has been evident this election year, twice as many Americans (56%) say their own representative in the House has done only a fair or poor job than say he or she has done an excellent or good job (28%).

Still, that is better than the ratings for Congress generally, whose “poor” ratings outnumber excellent or good evaluations by nearly four to one (45% to 13%). Moreover, people give their own House representative much better marks for specific aspects of their job performance – including having good judgment, the ability to bring change, being in touch with people in the district and bringing home projects and money.

The latest Pew Research/National Journal Congressional Connection poll, sponsored by SHRM, conducted September 23-26 among 1,010 adults, finds that 48% say their representative has good judgment and experience on the issues; just 32% say that statement does not describe their representative.

Opinions about other dimensions of incumbents’ job performance are more divided. Still, roughly four-in-ten (43%) each say their representative is the kind of person who can bring change to Washington, is in touch with the people of their district (43%) and does a good job of bringing government projects and money to their district (42%).
Nearly third of Americans (32%) say that their representative “has been in Washington, D.C. too long.” By contrast, 49% say that their congressman has not been in office for too long. 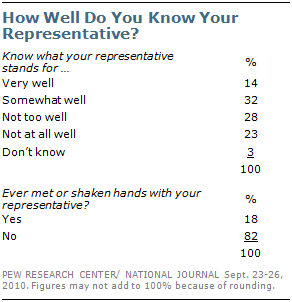 Overall, 46% say they feel like they know what their congressional representative stands for very (14%) or somewhat well (32%); about as many (51%) say they know their representative’s positions not too well (28%) or not at all well (23%). About one-in-five (18%) say they have actually met their own representative or shaken their hands.

People who have some familiarity with what their representative stands for have more positive views of their job performance. About four-in-ten (42%) of those who know what their representative stands for say he or she does an excellent or good job, compared with just 18% of those who are less familiar with what they stand for. 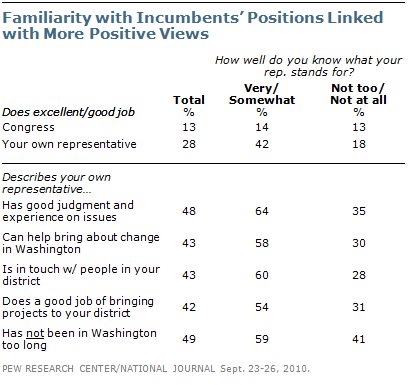 Yet there are little or no differences in the way that Republicans and Democrats view their representative’s performance in several specific areas – though independents tend to be more critical. For example about half of Democrats (50%) and Republicans (47%) say their representative is in touch with their district, compared with 36% of independents.

However, just 41% of Republicans say their representative can bring about change in Washington D.C. compared with 53% of Democrats; just 36% of independents say their lawmaker can bring change to the capital.

Obama Maintains Approval Advantage, but GOP Runs Even on Key Issues
Few See Quick Cure for Nation’s Political Divisions
Negative Views of New Congress Cross Party Lines
Support for Stimulus Plan Slips, But Obama Rides High
Democrats Have More Positive Image, But GOP Runs Even or Ahead on Key Issues
Quiz: Are you a Core Conservative? A Solid Liberal? Or somewhere in between?
What the data says about gun deaths in the U.S.
What We Know About Gen Z So Far
What the data says (and doesn’t say) about crime in the United States
Biden Nears 100-Day Mark With Strong Approval, Positive Rating for Vaccine Rollout