When it comes to one of the first major steps the U.S. government took to provide economic aid to people across the country – the CARES Act, signed into law by President Trump on March 27 – Americans know some of the basics but are much less clear on other aspects of the law. (Previous Center research finds that the economic aid package overall is widely supported.) 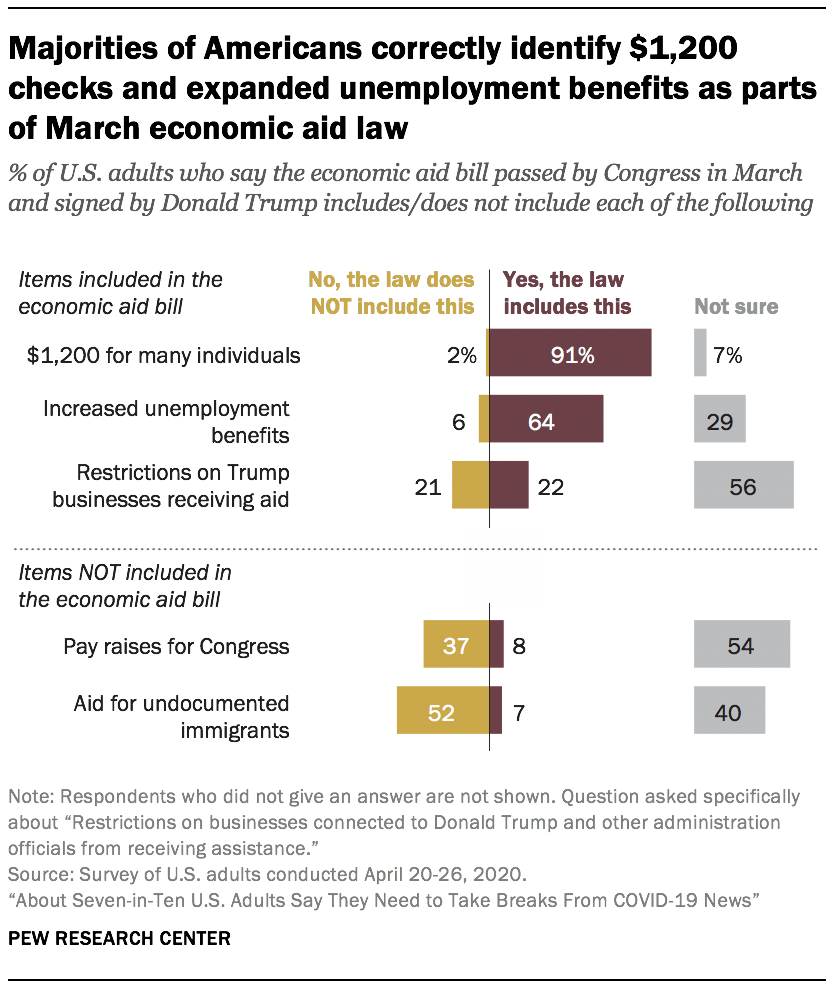 The survey asked respondents whether five items were part of the economic aid bill. Three of the items were signed into law as parts of the bill: $1,200 in stimulus money for many American adults, restrictions on businesses connected to Donald Trump and other administration officials receiving aid, and increased unemployment benefits for the next four months. Two items were not part of the bill but were rumored to be included: pay raises for members of Congress and federal aid and benefits for undocumented immigrants.

When it comes to whether the law restricted access to aid for companies connected to Trump and the administration, about the same portion of Americans correctly answer that it did (22%) and incorrectly that it did not (21%), while slightly more than half (56%) indicate they are not sure if the law restricts federal aid to businesses owned by Trump or other administration officials.

Of the two items not included in the law, there exists considerable uncertainty among the public. The largest share of Americans (54%) say they are not sure if the law included pay raises for members of Congress; few say it did (8%), while fewer than four-in-ten (37%) correctly answer that it did not. About half (52%) correctly say that the law does not give federal aid to undocumented immigrants, but 40% are not sure. 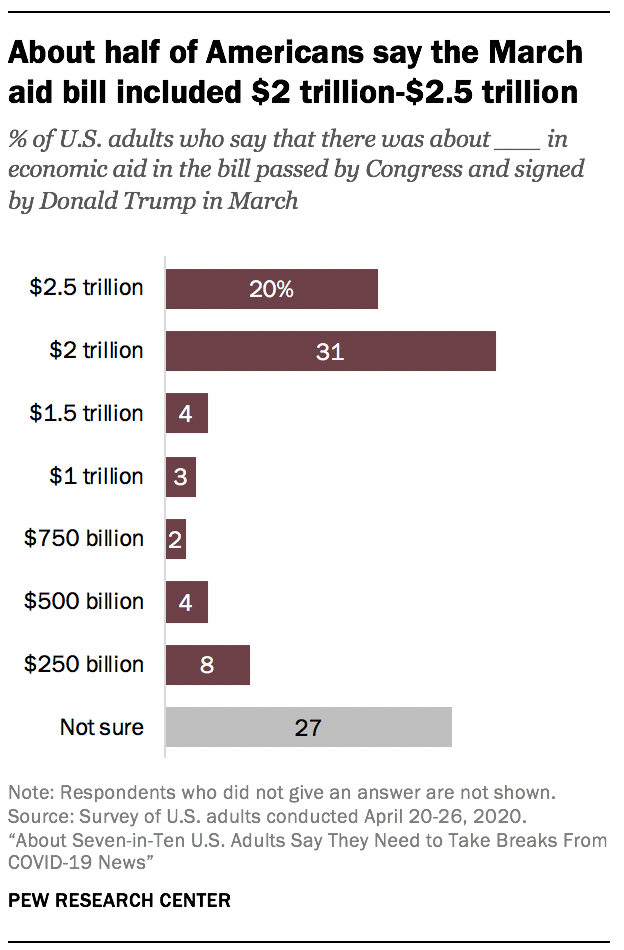 Older adults are generally more knowledgeable about the CARES Act than younger adults. Furthermore, there are not large gaps in knowledge of the law between Republicans and Democrats.

The economic aid bill passed into law in March authorized about $2 trillion in spending to address the coronavirus outbreak.

About three-in-ten Americans (31%) correctly identify about $2 trillion as the amount of aid in the bill, while another 20% say the bill authorized about $2.5 trillion in aid, which approximately aligns with the CARES Act funds plus $484 billion in supplemental aid passed by Congress and signed by Trump on April 24 while the survey was being conducted.

About a quarter of the public (27%) say they are not sure how much aid was included in the law passed in March. About two-in-ten offered other incorrect amounts for the size of the aid package.

These measures and more can be explored further in the Election News Pathways data tool, where all of the data associated with this project is available for public use. You can read more about our research on public opinion of COVID-19 here.

Data from this analysis comes from a survey conducted April 20-26, 2020. See the survey questions and methodology, or access the dataset.

About Seven-in-Ten U.S. Adults Say They Need to Take Breaks From COVID-19 News 1. Americans are turning to media, government and others for COVID-19 news 2. COVID-19: Both a national and local news story 3. Majority of Americans feel they need breaks from COVID 19 news; many say it takes an emotional toll 4. Some claims about ways to fight COVID-19 reach more Americans than others
5. Some components of first stimulus bill understood by most Americans, others not so much