When asked which news source people turn to most frequently, those most commonly mentioned are TF1 (16%), BFM (15%) and France Télévisions/France TV (15%). No other outlet was named by more than 6% of the public.

The French tend to be more fragmented in their main news sources than publics in other parts of Western Europe. Fewer than two-in-ten French adults name the same main news source, while at least three-in-ten adults in five of the eight countries surveyed share the same main source. For example, 48% in the UK name BBC, 39% in Sweden name Sveriges Television/Radio (SVT/Radio) and 37% in the Netherlands name Nederlandse Publieke Omroep (NPO) as their main source for news.

Main news source preference is also divided by populist anti-elitist views. Among people who hold these populist views, TF1 is the most cited main news source (18%), while people without these views most often name France TV (18%).2 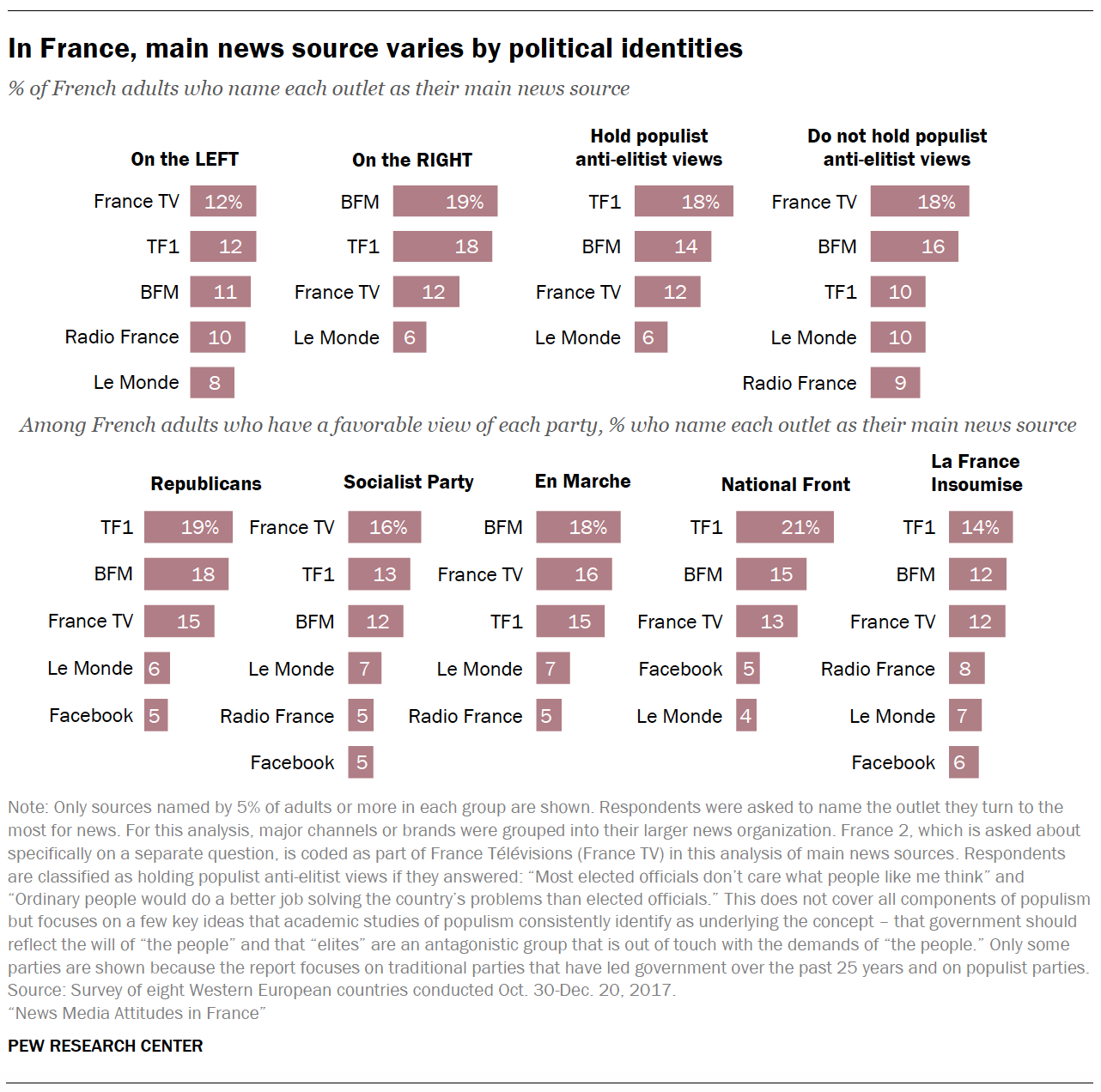 There are also differences in the main news source cited by adults in each age group. Among those ages 18 to 29, Le Monde is the most commonly cited source, while those ages 30 to 49 most often name BFM. Among those 50 and older, France TV – the country’s public media – is the most cited.

Overall, France TV is cited as a main news source by older adults more than the young. While a quarter of those in the oldest age group say they turn to France TV most frequently, only 7% of adults ages 30 to 49 and 3% of those 18 to 29 say the same. 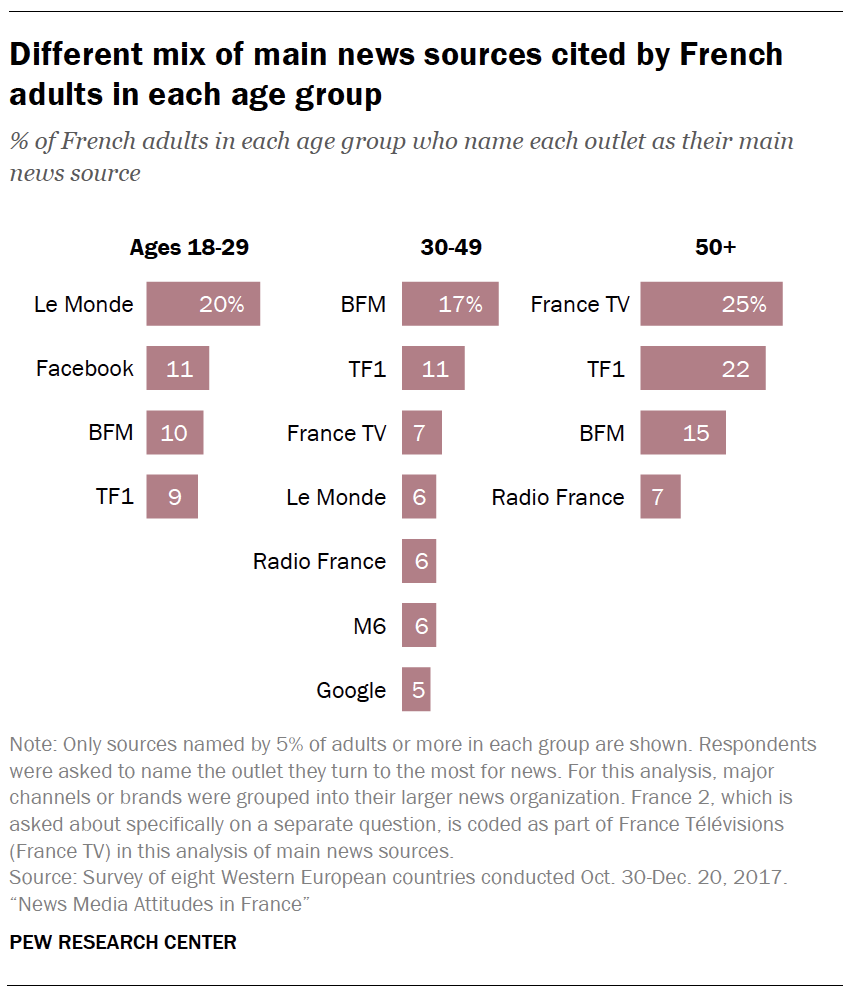 Furthermore, adults ages 30 to 49 name a larger mix of main news sources, as seven are mentioned by 5% or more in this age group. 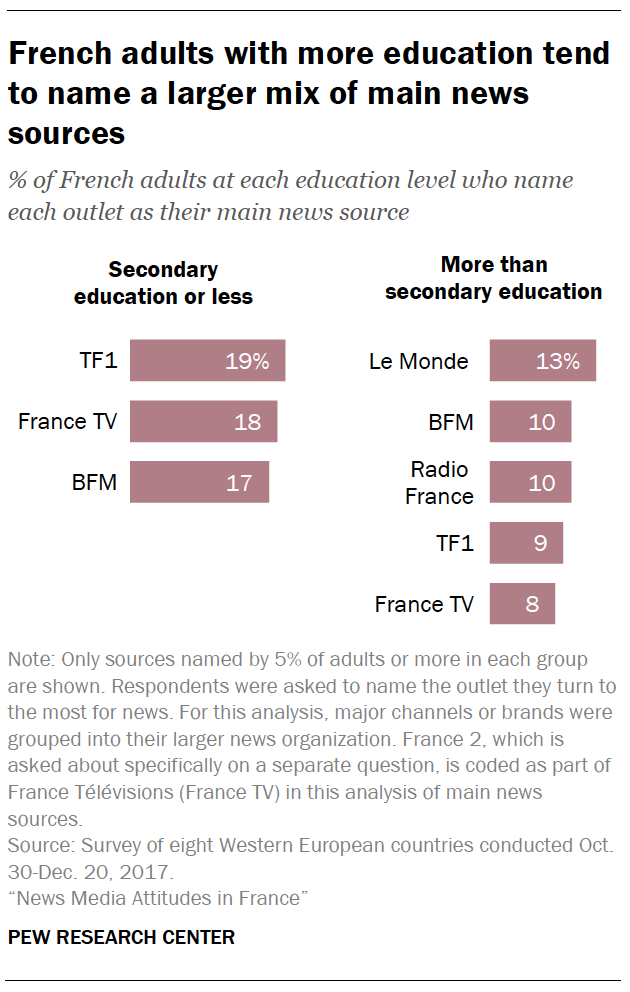 Among those with high education levels, Le Monde is at the top, cited by 13%, along with four other outlets that were named by 5% or more in this group. In contrast, those with lower education levels are more concentrated, collectively citing only three outlets above the 5% threshold. At the top is TF1, mentioned by 19% of adults with a secondary education or less, followed closely by France TV (18%) and BFM (17%).