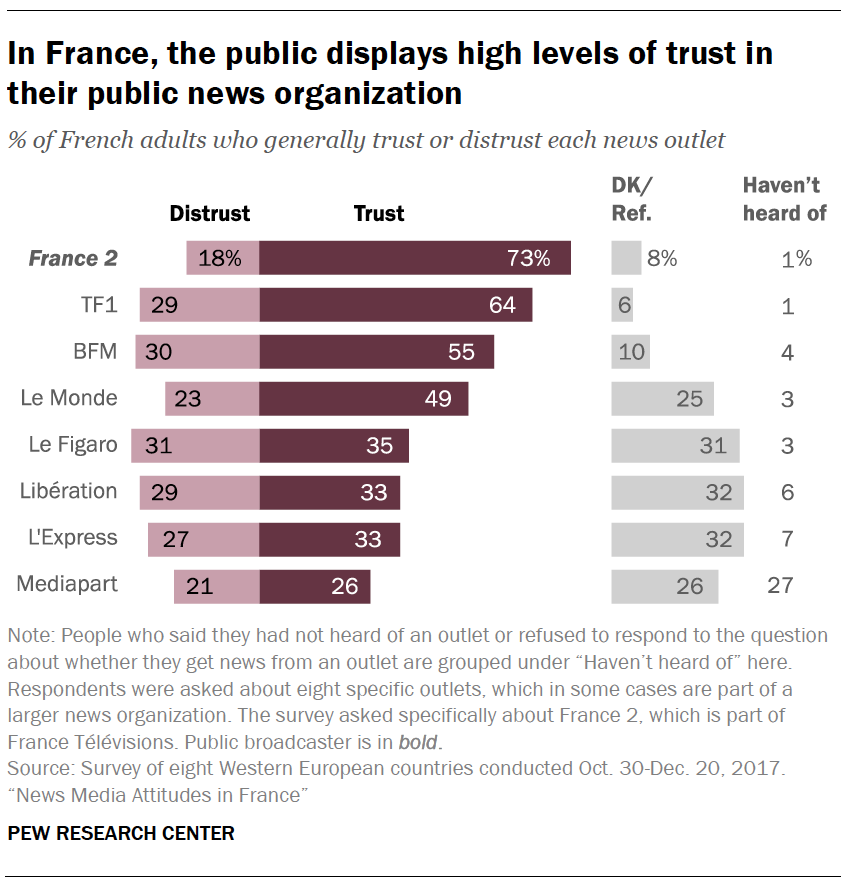 In seven of the eight countries surveyed, the public news organization is the most trusted news outlet asked about in each country. This is the case in France, where a large majority of French adults (73%) say they trust the public broadcaster France 2.

Some variations in trust in specific outlets, based on political identities

As with trust in the news media generally, trust in specific outlets varies by populist leanings, with those who hold populist anti-elitist views expressing lower levels of trust than those who don’t.

In France, those with populist anti-elitist views are 18 percentage points less likely than those without these views to say they trust the public news organization France 2. Trust is also divided along the left-right ideological spectrum – those who place themselves on the left of the 0-to-6 ideological scale are 25 points less likely than people on the right to trust the private news broadcaster TF1. 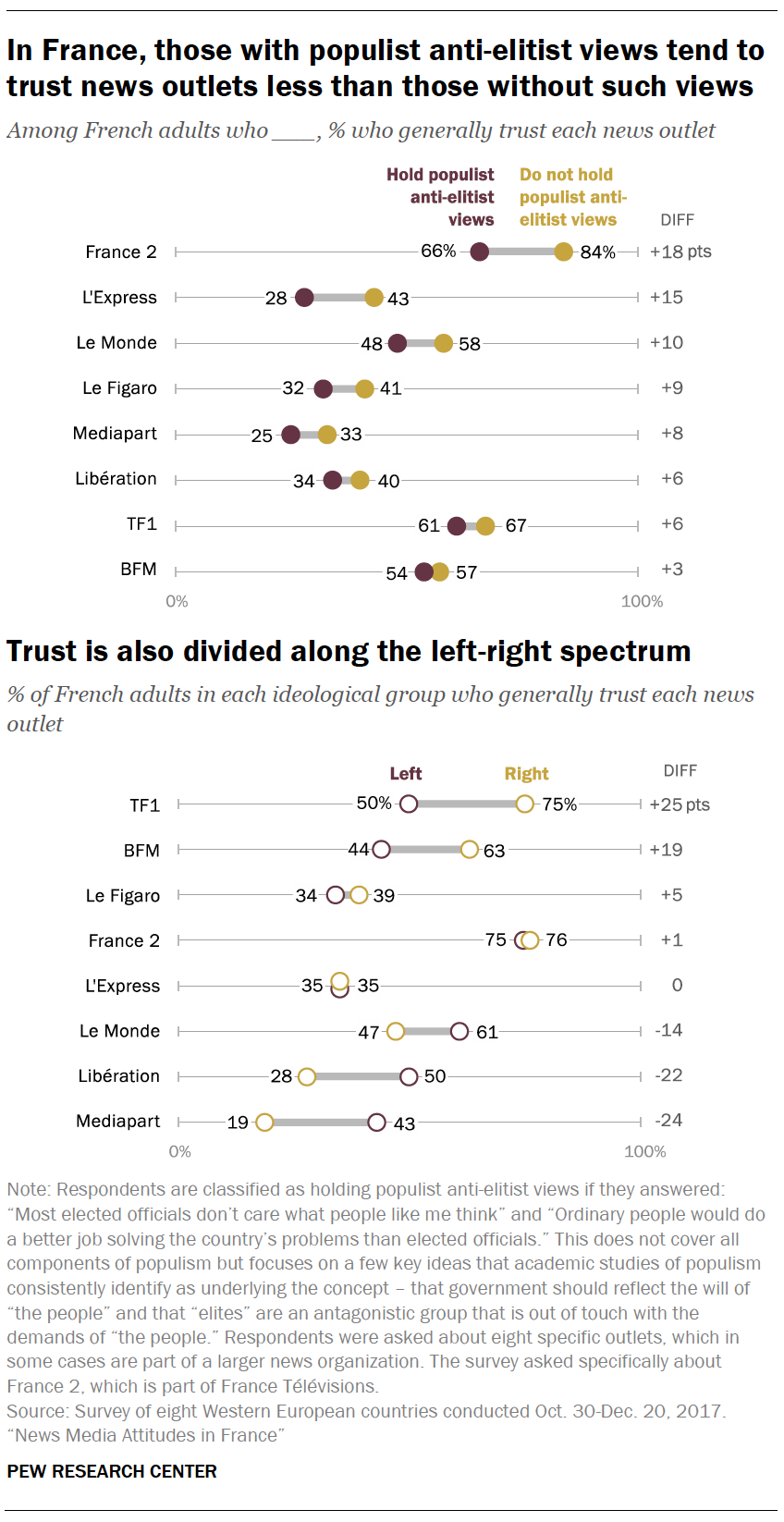 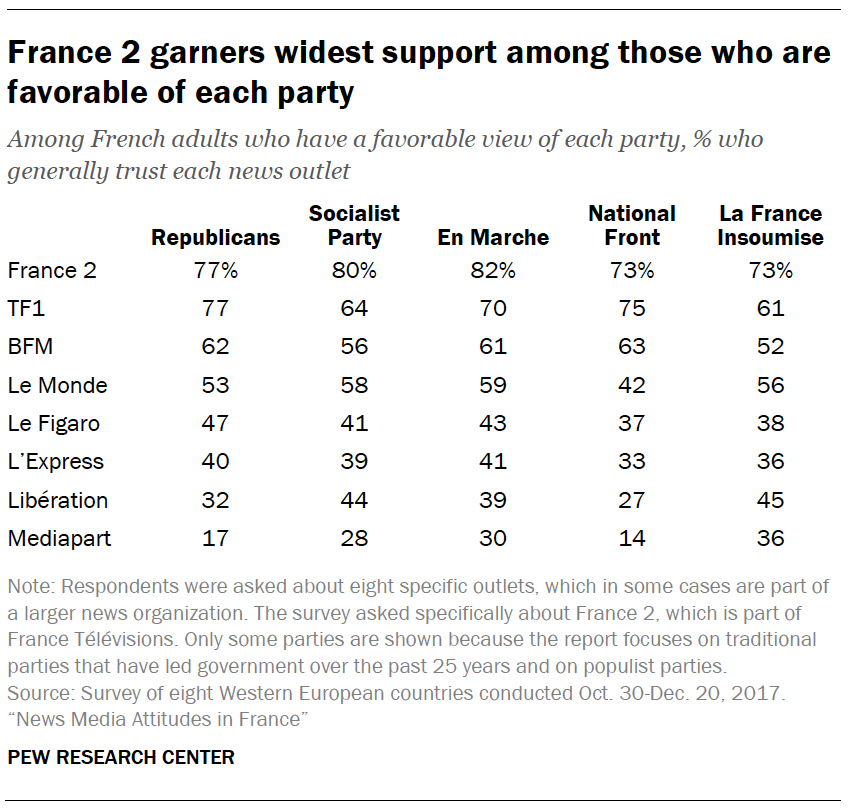 Differences along party support are in line with differences based on ideology. Those who view parties on the right favorably have higher levels of trust in TF1 and BFM. French adults who favor parties on the left are especially trusting of Le Monde and Libération.

Trust in specific news outlets also varies based on political party favorability. Among the eight outlets asked, France 2 garners the widest support, with 73% or more of those who favor each party saying they trust the outlet. In contrast, Libération, a daily newspaper in France, is trusted at far lower rates, with no more than 45% of those with a favorable view of any party saying they trust this outlet.

Trust in news media outlets by age and education 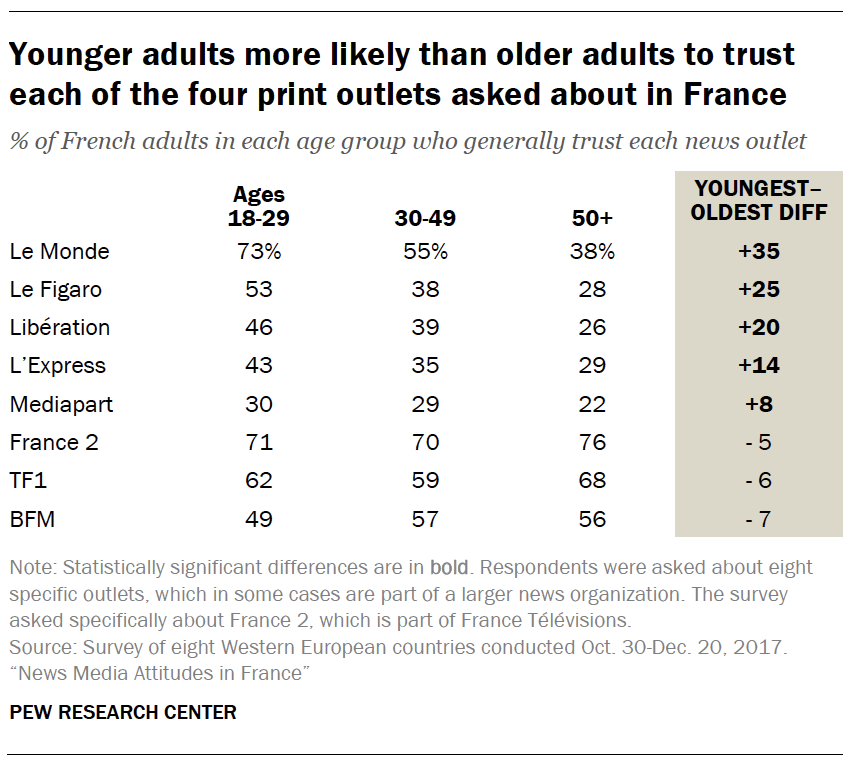 While trust in the overall news media is quite low among all age groups in France, this is not necessarily the case when it comes to trust in certain outlets. Among the eight outlets asked about in France, both France 2 and TF1 stand out as having high levels of trust across all ages, with 59% or more of adults in each age group saying they trust these outlets.

When it comes to trust in other outlets, however, the differences between age groups are notable. For example, those ages 18 to 29 are more likely than those ages 50 and older to trust each of the four print news outlets asked about – Le Monde, Le Figaro, Libération and L’Express – and these gaps in trust are quite substantial. Younger adults are at least 14 percentage points more trusting of each of these sources than those 50 and older. In the case of Le Monde, there is a 35-point gap in trust; about three-quarters of those under 30 (73%) trust the outlet, compared with roughly four-in-ten of those 50 and older (38%). 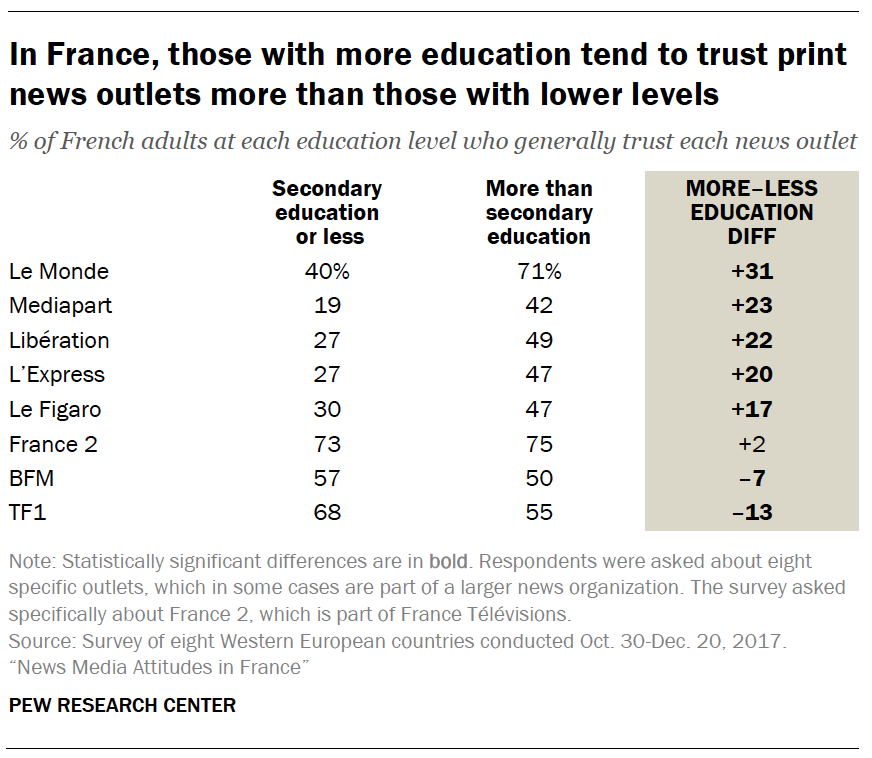 Of the three television outlets asked about – France 2, TF1 and BFM – both TF1 and BFM are trusted at higher rates among those with lower levels of education than those with higher levels. France 2, on the other hand, is trusted by majorities in both education groups.

Next: Acknowledgments
← Prev Page
Page1Page2Page3Page4Page5Page6You are reading page7Page8Page9Page10
Next Page →

News Media Attitudes in France 1. Views of the news media in France 2. Platforms used for news 3. The role of social media in news 4. Main sources used for news in France 5. Where users place outlets' ideologies
6. Trust in specific news outlets in France
Some variations in trust in specific outlets, based on political identitiesTrust in news media outlets by age and education
Acknowledgments Methodology Appendix: Detailed tables