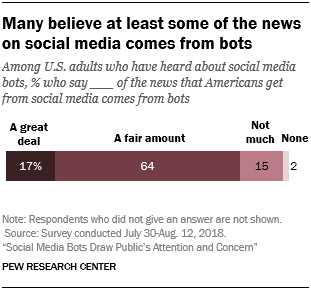 While social media bots can be used for many different purposes, much of the public discussion has been about their use in the spread of news. The public seems to have taken notice, and many believe at least some of the news Americans get on social media comes from bots.

About eight-in-ten of those who have heard of bots (81%) think these accounts are responsible for at least a fair amount of the news Americans get on social media, though fewer (17%) think a great deal comes from bots. (A previous Pew Research Center study of more than 100,000 tweeted links to 50 popular news websites found that 59% of those shared links were suspected to be from bots.) 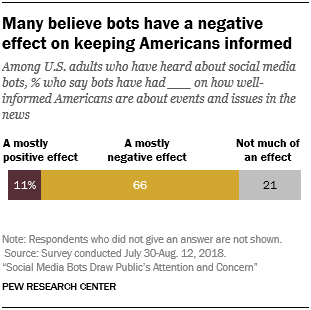 And, just as Americans are concerned about bots generally, many in the public perceive bots’ involvement in the news to be negative, at least when it comes to how well-informed the public is about the news. About two-thirds of those who have heard about social media bots (66%) say that these accounts have a mostly negative effect on how well-informed Americans are about events and issues in the news. In contrast, only 11% believe bots have a mostly positive effect, and about two-in-ten (21%) say they do not have much of an effect.

What’s more, those who think bots are responsible for a sizable portion of the news on social media are also more likely to think bots have a negative impact on keeping the public informed. Among those who say at least a fair amount of news on social media comes from bots, about seven-in-ten (72%) say that bots negatively impact how well-informed Americans are about the news, compared with 11% who say bots have a positive impact and 17% who say they have no impact.

Not many differences emerge across demographic groups, with broad agreement that at least a fair amount of the news Americans see on social media comes from bots and that bots have a negative effect on how well-informed Americans are.2

Social Media Bots Draw Public's Attention and Concern 1. Most Americans have heard about social media bots; many think they are malicious and hard to identify
2. Many believe at least some of the news on social media comes from bots and that these accounts have a negative impact on how the public stays informed
3. Americans express nuanced views of many common uses of social media bots Acknowledgments Methodology Appendix: Detailed tables