Although social media bots largely have a negative connotation among the public, certain uses of bots seem to be more acceptable than others. Those who have heard about bots were asked about a mix of nine ways that social media bots are used. Topping the list of supported uses: government agencies using bots to post emergency updates. About eight-in-ten of those who have heard about bots (78%) find this practice to be acceptable.

The public is more split for the remaining uses. At least half of those who have heard about social media bots find the two business-related uses acceptable: businesses using bots to promote products (55%) and respond to customers’ questions (53%). Similarly, the public is about evenly split on whether news organizations’ use of bots to post headlines or news stories is acceptable or not (50% find it acceptable and 49% find it unacceptable). And when it comes to an individual using bots to share pictures or quotes, about equal shares of those who have heard of bots find it acceptable (48%) as unacceptable (50%).

The more Americans know about bots, the less likely they are to find several of their uses to be acceptable 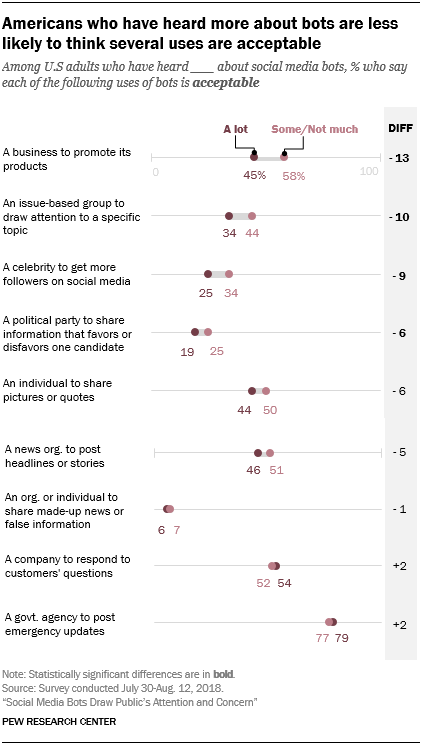 Americans who have heard more about social media bots are less likely to be supportive of a number of their uses.

Awareness about social media bots also influences views on two uses that help people or organizations promote themselves. For instance, a business using bots to promote its products is considered acceptable by 45% of those who have heard a lot about bots, compared with 58% of those who have heard less about them – a 13-point gap. And there is a 9-point gap when it comes to a celebrity using bots to get more social media followers.

Social Media Bots Draw Public's Attention and Concern 1. Most Americans have heard about social media bots; many think they are malicious and hard to identify 2. Many believe at least some of the news on social media comes from bots and that these accounts have a negative impact on how the public stays informed
3. Americans express nuanced views of many common uses of social media bots
The more Americans know about bots, the less likely they are to find several of their uses to be acceptable
Acknowledgments Methodology Appendix: Detailed tables