Even if the economic benefits are uncertain, digital video will clearly be a part of how consumers get content, including news, in the coming years. From live feeds like a presidential speech, to user-generated content around breaking news, to original video packages produced for the web, to clips or downloads of content first aired in legacy television, the options for online video are now vast.

So how are news organizations positioning themselves to be a part of the growing – but already crowded – digital video landscape? What kinds of content are being developed, and by whom?

Some news organizations have already created a name for themselves in this space. In 2006, the first News & Documentary Emmy Award went to a nonbroadcast news organization – the Washington Post – for its video coverage of Hurricane Katrina. In 2007, CNN and YouTube partnered to sponsor presidential primary debates, and the 2008 presidential election became the first one in which consumers could watch live streams of the candidate debates and vote returns on outlets like MSNBC.com, foxnews.com and CNN.com. Storyhunter, a website launched in 2012 by two professional video journalists, has completed 100 videos, established a network of more than 1,500 professional freelancers worldwide and signed media partnerships with Yahoo and AOL. As a startup that bridges the gap between content providers and publishers, Storyhunter vets the journalists and provides fact checking, editorial expertise and a virtual workspace.

Some developments in 2013 include:

While many of these recent developments have come from news outlets native to the digital space, the biggest source of news video by far remains television – local and national broadcast, along with cable. More than half (55%) of U.S. adults say they get news on television, according to Pew Research survey data. Local ranks first, with 24 million tuning in to late-night broadcasts, according to Nielsen Media Research. 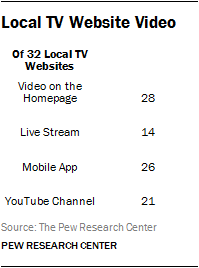 Pew Research examined the homepages of a mix of 32 local TV websites in a range of markets across the country, looking at the quantity of video content they feature, the availability of streaming content and how that video content is hosted, as well as the presence of mobile apps and YouTube channels.

The findings reveal that, at least within this mix of sites, video is a regular part of their digital offerings, although the extent of video usage varies widely. Most of these local TV news websites have mobile apps, while about half offer live streams of their TV broadcasts, and half have channels on YouTube. (It is also worth noting that the differences across these sites do not seem tied in any way to their network affiliation. Variations, in other words, were seen within the ABC-affiliated stations in this study as well as the CBS and NBC affiliate groups.) 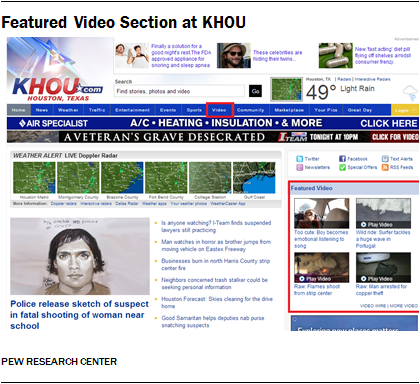 All but four of the 32 local TV stations studied (all four of them in the smallest market) included video on their website. On average, these videos accounted for 42% of homepage story links, including links to live news feeds. But the degree to which video defined their site varied a great deal, from 92% of homepage story links on one site (WEAR in Mobile, Ala.) to just 6% on another (KDFX in Palm Springs, Calif.).

All the local TV websites featuring video set this content off in a specific part of the website, and in some cases, more than one space. Many sites used a layout similar to that of KHOU (Houston), where the page features a “video” section in the top navigation as well as a “featured video” section. 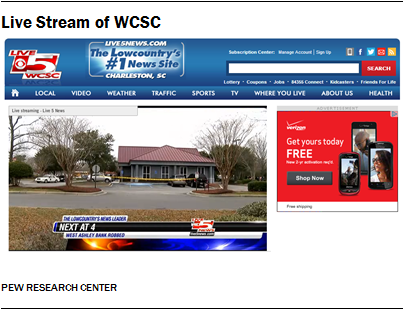 Nearly half of the local TV outlets studied – 14 out of 32 – included live streams. During the time period studied, these were simply feeds from the local broadcast, produced in a TV studio, as opposed to being made for the web (with one exception). Offering live video streams carries an additional cost – one that fewer stations have taken on. Live streaming requires more bandwidth than streaming other videos, and with data caps becoming more common among broadband providers, stations may feel users do not want to incur those limits on web usage.

The decision to stream broadcasts online (or on mobile, discussed below) also can have some downsides for local TV stations. The most glaring is that if users decide to shift their watching to these live streams, then the stations will lose those eyeballs for their television ads, a traditionally more lucrative type of advertising.

In addition to having a dedicated video section, all but one of the sites in the sample exclusively hosted their video content themselves, as opposed to using an outside hosting service like YouTube and posting the videos on their websites. Even for the ABC affiliate in Elmira, N.Y. WENY, which featured some videos that were hosted on YouTube, many of the video clips found on the homepage were hosted by the site itself. This indicates that even smaller local TV stations have invested in hosting their video content on the web themselves.

Hosting video is expensive, especially if audiences move their news viewing away from the television to the internet. Nevertheless, hosting one’s own content also allows for far more flexibility and allows the organization to keep all the revenue from any video advertising (revenue they have to share for content on YouTube or other sites). 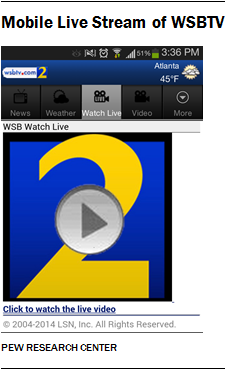 Having a dedicated channel on YouTube requires staff to maintain the content. Among local TV stations studied here, most have decided to make that investment. Eighteen of the 32 local TV sites had channels on YouTube and posted their video content there. All of the national outlets also had YouTube channels.

While 18 of the 32 local TV sites had YouTube channels, subscribers to these channels varied sharply. The number of subscribers ranged from just over 4,000 at WTNH in Connecticut to only eight at KURL in Montana. Even among many of the local TV stations that did have a YouTube channel, many appeared inactive.

To put those subscribers in perspective with national news outlets, CNN had 408,675 subscribers, and Vice Media had 4.4 million.