Social media came to a much different initial verdict about the first presidential debate than did the early polls and the conventional press, according to an analysis of the conversation on Twitter, Facebook and blogs by the Pew Research Center’s Project for Excellence in Journalism. 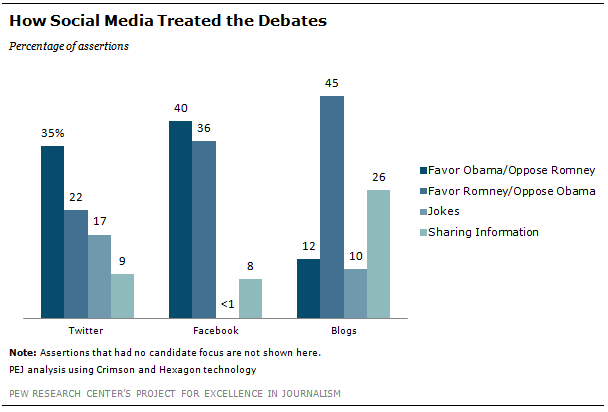 On both Twitter and Facebook, the conversation was much more critical of Mitt Romney than it was of Barack Obama. And when the criticism of one candidate and praise of another are combined, the conversation on Twitter leaned Obama’s way. On Facebook it was something of a draw.

Only in blogs, which tended to offer more of a summary of the event than a moment-to-moment reaction, did the sentiment resemble that of instant polls or press analysis, which have tended to see Romney as having the better of the debate.

For both candidates in social media, however, praise of their performance in general was hard to come by.

On Twitter, an examination of 5.9 million opinions posted from the beginning of the debate through the next morning finds more of the conversation leaned Obama’s way (35%) than Romney’s (22%). But those who favored Obama tweeted not so much to praise him as to criticize his opponent. Of the entire conversation, 9% praised the president and 26% was critical of Romney. Of those favoring Romney, 7% praised him and 15% criticized Obama.

If the conversation that did not evaluate the candidates is removed from the tally, the Twitter numbers would show 61% leaning Obama’s way and 39%, Romney’s.

On Facebook, the results were more evenly split. An analysis of 262,008 assertions on public Facebook posts during the same period found that 40% of the discussion leaned toward Obama compared with 36% toward Romney. Joke-telling was marginal. Information-sharing made up 8% of the conversation, and 17% was not about the candidates.

The blogosphere was the one component of social media that more aligned with the sentiment found in instant polls and in press coverage. An analysis of 6,313 assertions in a broad sample of public blogs favored Romney by roughly 4 to 1. Fully 45% of that sentiment leaned Romney’s way and 12% toward Obama. Here, almost all of the conversation for Obama was criticizing Romney. Of the conversation going Romney’s way, more of it actually praised his performance (26%) than criticized the president’s (18%).

One difference in the blog conversation, the analysis found, is that much of it came toward the end of the debate or later, and tended to involve more of a summary evaluation of the whole event rather than a reaction to a single exchange or moment.

Except for blogs, these findings about social media offer a contrast to what people generally saw in the immediate aftermath of the debate in polls or in mainstream media coverage.

A CNN poll of debate watchers taken immediately after the debate found that 67% of registered voters thought Romney won the debate vs. 25% for President Barack Obama. A CBS poll of undecided voters who watched found 46% for Romney and 22% for Obama.

A look at political analysis in mainstream media found something similar. “Romney takes fight to Obama,” read the headline of the Washington Post lead story. The Denver Post was more direct: “Round 1: Romney.”

This analysis of social media by the Project involved a mix of human researchers and computer analysis. PEJ content analysts build and train “monitors” using software provided by the firm Crimson Hexagon, which consists of an algorithm that identifies statistical patterns in words used in online texts. Click here for the full methodology of this report.