For the second year in a row, the employment situation for recent journalism and mass communication graduates has improved, according to a new survey from the University of Georgia. But placed in the context of a “terrible” job market in recent years, the report says the latest job numbers represent only a “modest…recovery.”

Among those earning a bachelor degree in journalism and mass communication in 2011, 62.2% reported finding full-time employment within six to eight months after graduation, an increase from 58.2% one year earlier and from 55.5% in 2009. As recently as 2007, the employment rate for new graduates was 70.2%. 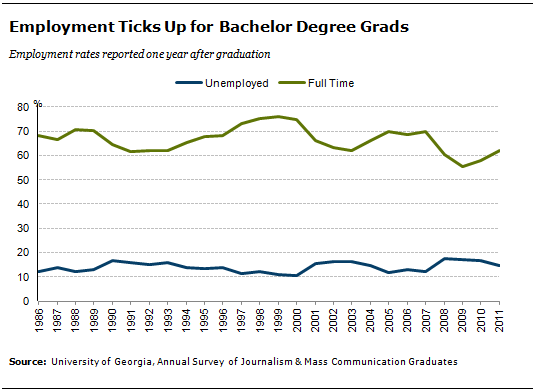 The survey of 2,195 bachelor and master degree recipients in journalism and mass communication was conducted by the James M. Cox Jr. Center for International Mass Communication Training and Research at the University of Georgia. And according to Cox Center director Lee Becker, the survey results track with broader national economic trends.

“In a period of some economic recovery nationally, our field has shown that same general pattern,” Becker said. But, he added, “It’s hard to be optimistic when you use as a reference point the pre-2008 data” before the profound recession struck.

The report also found that women fared somewhat better in the job market, with 69.7% of the 2011 female bachelor degree recipients finding a full-time job compared with 61.7% of the male grads. Becker attributes that to the fact that women are more likely than men to go into the fields of advertising and public relations, which have higher employment rates than other journalism and mass communications related fields.

There was also a notable rise in the percentage of minority graduates in 2011 who found full-time work-58.7%, up from 49.9% a year earlier. Even so, that rate of hiring lags well behind the non-minority level of 69.9%

The survey also found that, for the first time since 2006, the m 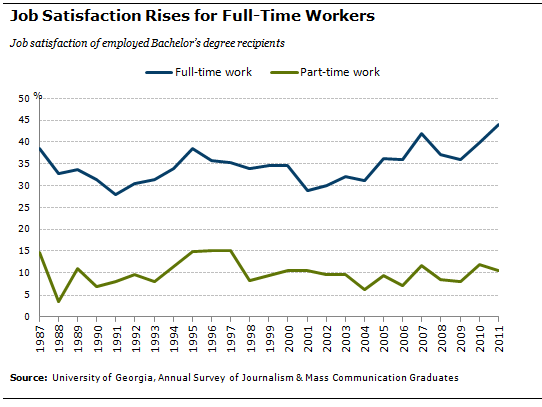 edian salary earned by bachelor degree recipients inched upward, moving to $31,000 from $30,000. Still, when adjusted for inflation, that’s almost $2,000 a year less than new graduates were earning in 2000. And it’s well below the $40,735 that the National Association of College and Employers reported as the median starting salary for all 2011 college grads.

“The U.S. economy, to be sure, is not producing salary growth except in select segments,” the report said. “The evidence is that journalism and mass communication is not one of those growth segments. That cannot be good news for those contemplating careers in communication occupations.”

Despite a difficult job market and barely budging wages, those bachelor degree recipients who said they are “very satisfied” with their full-time job rose to 44.2% compared with 40% the year before. Indeed, that is the highest level of satisfaction reported by the new graduates in a quarter century.

By way of explanation, Becker suggests those sentiments may indicate relief at simply having a job in difficult times. “I think it probably reflects that if you’ve got a job, you’re pretty happy with it,” he said.

The survey from the University of Georgia also measured the news consumption habits of the 2011 graduates and it reveals, among other things, steadily declining interest in the print newspaper. Only 41.6% of the bachelor degree recipients reported reading a newspaper yesterday, down from 44.6% a year earlier and from 60.7% as recently as 2005. That is smaller than the percentage who said they listened to radio news the previous day (42.7%). 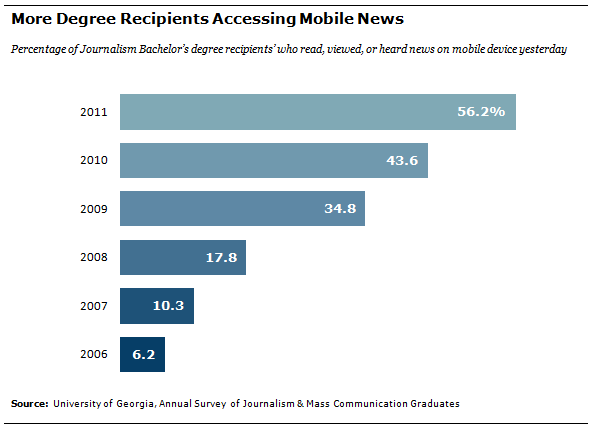 While more than three quarters of the bachelor degree graduates (76.2%) said they got news online the previous day-inching up from 75.2% a year earlier-the big jump came among those who reported getting news from a mobile device yesterday. That number jumped to 56.2% from 43.6% one year earlier.

And in an indication of the growing role of social media in the lives of young Americans, 74.5% of the 2011 bachelor degree recipients said they went to YouTube or another video sharing site yesterday, 93.9% checked at least one social networking site and 54.8% read at least one blog.