One of the subjects that fascinates social media users is news about technological innovation. Last week was no exception as rumors about new smartphones-one from Apple and perhaps one from Facebook-triggered intense speculation and some high-tech sleuthing on blogs and Twitter.

For the week of May 28-June 1, the No. 2 subject on blogs was news about Apple, with some of it focusing on the expected release of the iPhone 5. And on both blogs and Twitter, news of a possible Facebook phone in the offing registered as the No. 3 topic, according to the New Media Index from the Pew Research Center’s Project for Excellence in Journalism.

The Facebook speculation was driven by a New York Times story, citing anonymous Facebook employees, suggesting the company hopes to release a smartphone by next year. The news about the iPhone came from an Apple news site that appeared to provide some visual evidence about how the next version would look.

The blogosphere often features speculation about new tech products that sometimes turns out to be accurate, and sometimes, not so much. 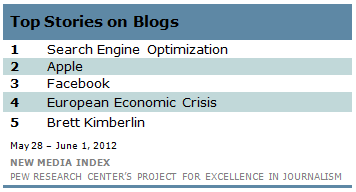 Prior to the release of Apple’s highly anticipated iPad in early 2010, tech bloggers dissected every angle of the product-despite having little or no concrete knowledge of the tablet. From the name of the iPad to spec gossip-like two dock connectors, an antenna and more-much of it never materialized.

On other occasions, the early guessing has been more accurate. For example, when it was announced in June 2010, the iPhone 4S’ camera was upgraded and the phone came in a new color, white, just as many bloggers had predicted in the months before the release.

Many of these rumors are spread by tech writers-in outlets like MacRumors, BGR, TechCrunch, 9to5Mac-for whom covering these products is a both full-time pursuit and a profession. These tech writers have created a niche for themselves as their speculation quickly spreads through the blogosphere rumor mill.

Last week, the buzz was about new Apple products and the catalyst was 9to5Mac, which shared images of the casing for the supposed new iPhone. The devices in the photo are from a Chinese parts supplier that sold the casing to smartphone and tablet repair company iFixyouri. The pictures show that the new iPhone could have a smaller dock connector, an aluminum alloy plate on the back and is thinner overall.

Many bloggers thought the images looked authentic and represented a real clue about the next phone.

“These are the first that look legit,” wrote Webomatica, “Well, will settle for drooling over photos like these.”

“Purported iPhone and iPhone component photos are a dime a dozen – and mostly crap. But every now and again a few crop up that are difficult to dismiss. Such is the case with new photos obtained by 9to5Mac.com, which claim to show the rear shell of the iPhone 5,” wrote Pocket PC Central.

“While the images are somewhat grainy, they look legit enough to warrant our interest, especially since they sport both the longer screen and smaller dock connector of the most reason iPhone 5 rumor. The metal portion of the rear cases also aligns with rumors we’ve been hearing since last year,” wrote Devindra Hardawar at Venture Beat.*

“If the images are legitimate, I sincerely hope we’ll be seeing some close-ups and detailed overviews in the coming days, since I – like, I presume, many of you – cannot wait to see concrete details of what Jony Ive and the gang have been cooking up within their secret lair,” wrote Ben Reid at Redmond Pie, referring to the senior vice president of industrial design at Apple.

The third-biggest story on both blogs and Twitter last week was another rumor about a smartphone, this time from social media giant Facebook, which had previously tried and failed to release a smartphone. While the rumor has been around for a while, The New York Times story carried a bit more heft for tech bloggers.

Most of them, however, asserted that getting into the phone business would be a bad move on Facebook’s part.

“That rumor’s back. The one about Facebook making its own phone. Except this time the New York Times is saying it, complete with reports of former Apple engineers coming aboard to make Zuck mobile,” wrote Brian Barrett at Gizmodo, “It seems more certain than ever that Facebook’s going to vomit out a handset sometime next year. What a terrible idea.”

“Here we go again: Facebook is apparently trying for the third time to get its phone project off the ground,” wrote Alexia Tsotsis at Tech Crunch, “Does Facebook need a phone? Whatever the answer to that question is, the more important item is that it THINKS it needs a phone, most likely because it’s still lacking a clear mobile strategy with regards to revenue.”

“Mainly, the idea that Facebook needs to do this to ensure that it can run ads more easily ignores the fact that users-who ultimately would make a decision whether to buy a new phone-aren’t clamoring for ads from Facebook on their devices,” wrote Robert Hof at Forbes, “A design that essentially makes the smartphone safe for Facebook ads seems unlikely to appeal to Facebook users.”

“Tech world consensus is that it would be a nightmare for Facebook if it got into the mobile hardware game. Surely there are better ways to make money in the mobile space. Wake up call, folks: people don’t click ads anymore,” wrote Drew Olanoff at The Next Web, “A Facebook phone, which has been rumored for quite some time now, could be one of the only ways for the company to not only control the experience of its mobile users, but properly iterate and hack out a better mobile experience overall.”

Other News on Blogs

The top story on blogs last week was Search Engine Optimization, a topic that has been one of the top stories on blogs for four of the past five weeks. Several tech writers shared tips on how to increase web traffic, a popular subject among small businesses and tech firms.

The No. 4 subject was a discussion surrounding the European economic crisis, specifically the bank Lloyd’s of London preparing for the collapse of the Euro and how Greece’s once-thriving sex industry has been hit hard by the debt crisis.

In fifth place was a story concerning Brett Kimberlin, the man convicted of a series of eight trash bin bombs in Speedway, Indiana in 1978. Last month, conservative bloggers started “Blog About Brett Kimberlin Day,” claiming that he has been responsible for harassing them. 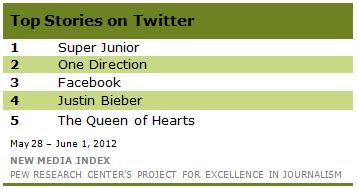 The roster of top Twitter topics last week was occupied by teenage crooners. In first place was Twitter mainstay Super Junior, which announced plans to release their sixth studio album before one of its members, Leeteuk, joins the military. Tweeters also shared photos tweeted by Yesung, another member of the group.

Another popular boy band, One Direction, came in second place with a tweet announcing their new DVD along with an animated video of the group created by a fan called ““>The Adventurous Adventures of One Direction.” A “>long video of one of the group members, Liam, on a web camera, but not doing much, was also widely shared on Twitter.

In fourth place was tween favorite Justin Bieber and a link to his new single Die in Your Arms on iTunes. The fifth most talked about subject on Twitter for the week was a Google search for the term “the queen of heart.”

A gruesome case of cannibalism in Miami drew attention on YouTube last week, accounting for two of the five most popular news-related videos and prompting speculation about drug use and a “zombie attack.”

On May 26, a naked man was shot dead by Miami Police while eating another man’s face on the busy MacArthur Causeway in broad daylight. . The suspected attacker was identified by the Miami-Dade County Medical Examiner’s office as 31-year-old Rudy Eugene. The police union president, Armando Aguilar, said Eugene may have been under the influence of an LSD-like drug known as bath salts.

The No. 2 video was footage from The Miami Herald’s surveillance camera which caught most of the disturbing attack on tape. And, the No. 4 video was footage from a Miami CBS affiliate report on the incident. In the clip, Aguilar gives details of the attack, shooting and a possible explanation for psychotic behavior.