For the second week in a row, major tech news dominated the online conversation-with the focus last week on speculation about the new iPhone model, details about new gadgets on Facebook, and changes to Google+.

For the week of September 26-30, no subject received more of that attention than the new iPhone, which was introduced on October 4. It proved to be the No. 1 story on blogs and No. 2 on Twitter, according to the Pew Research Center’s Project for Excellence in Journalism. And that follows an intense buildup of interest in social media that lasted for more than two months. Indeed, the new iPhone has been one of the top stories on blogs for seven of the past nine weeks and three of the past four weeks on Twitter.

The name of the game last week was speculation, and although some bloggers were sharing unverified information about the iPhone 5, those rumors were debunked when Apple CEO Tim Cook took the stage to announce the iPhone 4S, which looks like the already-released iPhone 4, and is an upgrade of that phone.

Fascinated tech bloggers also speculated about the nature of that rollout, which marked Cook’s first major appearance as the company’s new boss. (Cook became CEO after the late August resignation of Steve Jobs, who passed away on October 5.) 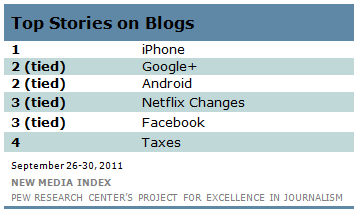 Tech blogs dominated discussion of the iPhone, posting articles related to the new phone, from expected details about the announcement, to a potential lost prototype for the iPhone 5 and even protective cases that looked slightly different than ones made for previous versions of the iPhone.

What pervaded almost all of the responses was a sense of breathless anticipation.

“As of now we have to just wait and watch to see how all these rumours and speculations pan out,” wrote Abdul Waheed Makki at Technology Pak.

“This is really interesting, as the so called tear drop shape of the new design came from this lost prototype,” wrote Gary Ng of iPhone in Canada, “We’ll find out on Tuesday, October 4th at Apple’s ‘Let’s Talk iPhone’ media event.”

“Although none of this is written in stone, where there’s smoke there’s fire, and we’d be very surprised if Apple only introduced a single new iPhone come Tuesday,” wrote Aayush Arya at The Next Web.

“Rumors surrounding a new teardrop styled iPhone 5 design have almost taken on a life of their own. Whether it be via leaked case schematics, alleged iPhone 5 case moldings, or even artist renderings, Apple fans have been fed a consistent stream of information that has led many to hope for a larger screen iPhone 5 this fall,” wrote Luis Estrada of MiPhoneAppCity.

On Twitter, more news about the new iPhone was shared, with many people simply retweeting pieces they found interesting. The most popular were from the tech blog Mashable. One was an infographic about whether or not users would upgrade to the new phone, and another piece explained what to expect from the launch.

“iPhone 5 Leak! It has a keyboard! joked Breanna Hughes, linking to a photo of an old Nokia phone.

Another hot topic last week was Facebook, which had been expected to introduce its new iPad app at the October 4 Apple event. (As of October 6, the app has not yet been updated.) Changes to the Facebook interface also generated attention. Facebook was the No. 1 story on Twitter and also tied for third place on blogs. And many of the online responses reflected skepticism about the social media giant.

“To be honest, at this point I’m not holding my breath and will believe it when I see it in the App Store,” blogged Andrew Wray at Andreas’ Blog, in response to reports that Facebook would have a new iPad app.

Others were concerned that Facebook would be tracking all internet activity, even when a user has logged off of the site.

“If you’re a Facebook user and haven’t logged out-and for a while recently, even if you have logged out-Facebook knows your identity,” wrote John Mark Ockerbloom at Everybody’s Libraries, “And if Facebook knows who you are and what you’re looking at, it has the power to pass along this information.”

Still, there were a few pleased with the company’s new features.

“While many of us are typically resistant to the network’s changes at first, the upcoming developments sound promising in many ways. These recent changes also seem to be much bigger than the typical small changes the company implements all the time,” wrote Danielle Edberg at Make it Work Blog.

On Twitter, many shared articles about changes to Facebook, including one entitled “No, You Aren’t Going to Quit Facebook,” which refuted the idea that users who express dissatisfaction with the social network are actually going to quit using it.

“Facebook is the Saturday Night Live of the web. They keep changing things, it still sucks and we keep watching,” tweeted Scott Hanselman.

“Let’s just be honest about what Facebook really is, guys: a birthday reminder service masquerading as a social network,” wrote Baratunde.

“I swear, if Facebook changes their layout one more time, I’m going to post a status update about it & then use their site as much as always,” joked Sexy Spec.

News about Google+, a new social network created by the internet giant, also had people talking last week, with the subject tied for second place on blogs and in fourth place on Twitter.

Google+ has been a site for over three months now, and the company announced some new features last week, including upgraded online “hangouts.” Most bloggers simply linked to Google’s blog post on the subject, but a handful commented on the changes.

“Google+ has just gotten much better, and we definitely can’t wait to try out the new features,” wrote Edgar Cervatnes of Android and Me, “Google+ is still a very young social network, though, and there’s always room for improvement.”

On Twitter, people were chattering about being able to share their Google+ circles with others and were pleased about the development.

“You can now share Google+ Circles. Good for journalists who use curated lists,” tweeted Liz Heron.*

Google Analytics also released an announcement that it would have real-time data so its users can access analytic information instantly. Twitterers were pleased with the advancement.

Tech news was not limited to the iPhone, Facebook and Google on blogs last week. Tied for second place on blogs was a story about an update to the Android phone. Although the response to this development was not as widespread as iPhone discussions, users seemed cautiously optimistic about the new operating system.

Tied for third was discussion about Netflix CEO Reed Hastings’ letter to customers. Hastings recently made some significant changes to the popular movie rental service, including a new payment structure, which were not well-received by customers. “I messed up. I owe everyone an explanation,” Hastings wrote in the letter, which did not sit well with those online.

“Is that what we deserve, after all we’ve been through together?” wrote Chris Taylor in an op-ed letter to Reed Hastings on Mashable.

Wrapping up the most popular blog posts was a conversation about taxation based on class division. Bruce Ackerman and Anne Alstott, law professors at Yale, wrote an op-ed for the Huffington Post about how the richest Americans saw their income more than double from 1979 to 2006 while paying only a small increase in taxes in that period. In their article, Ackerman and Alstott provided links to Congressional Budget Office data about pre-tax incomes and tax rates broken down by household income category. These two data sets were frequently shared on blogs.

In addition to discussion of Facebook, iPhone and Google, two pop stars and a protest sparked discussion on Twitter. 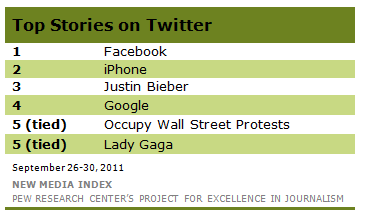 Pop idol Justin Bieber, a frequent topic on Twitter, came in third place. People shared a photo of him dancing with Santa Claus and a video of him hitting a golf ball.

Tied for fifth place was a piece about Lady Gaga’s next single from her current album, Born This Way. The song is called “Marry the Night” and Gaga explains it as a song about her “husband, New York.”

Also finishing at No. 5 was a video of female protesters at the Occupy Wall Street protest getting pepper sprayed by a New York City policeman. The same video was No. 2 on YouTube for the week.

Twitter users repeatedly shared information that the same officer spraying protestors in the video had several lawsuits filed against him for false arrest and civil rights violations during protests surrounding the 2004 Republican National Convention.

The global financial crisis dominated YouTube last week thanks to a UK trader whose remarks made him an overnight internet sensation.

The No. 1 and No. 3 news videos featured a London-based independent trader named Alessio Rastani being interviewed by the BBC’s Maxine Croxall on September 26. His comments included, “the market is toast,” “I go to bed every night dreaming of another recession,” and “governments don’t rule the world, Goldman Sachs rules the world.” He also urged people to protect their assets, warning that the markets would crash again in less than 12 months.

His appearance caused a stir and raised speculation that the BBC interview was a hoax and that Rastani was a member of the Yes Men, a group of activist impersonators.

The Yes Men and BBC denied that Rastani was a member of the group. And The Telegraph, Forbes and CNN, which have all interviewed him, reported that he is not registered with the Financial Services authority and he is “an amateur trader using his own money.”

The No. 2 video was a clip from a group called The Other 99 Percent that is leading the Occupy Wall Street Protest. The clip shows a New York police officer pepper-spraying a group of female protestors penned in by an orange mesh barricade during the protests against corporations in downtown Manhattan.