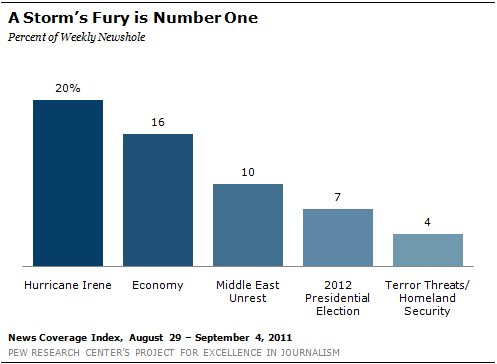 Characterized by some as an overhyped event, Hurricane Irene was the No. 1 story in the American news media last week as the press turned from tracking its path to assessing the damage wrought by the storm.

From August 29-September 4, coverage of Irene filled 20% of the newshole, according to the Pew Research Center’s Project for Excellence in Journalism. That was down slightly from the previous week when it was the No. 2 story, filling 21% in PEJ’s weekly News Coverage Index, which by itself was the most attention to any hurricane since PEJ began tracking news in January 2007.

The storm—which claimed more than 40 lives and did billions of dollars worth of damage in the U.S.—struck the most populous areas of the East Coast the weekend of August 28. For most of last week, Irene was no longer a hurricane, but the full extent of that damage was just becoming clear.

On Monday August 29, nearly half of the overall newshole studied by PEJ was devoted to Irene and coverage stayed high for the first half of the week. It then diminished dramatically in the latter part of the week.

The week’s No. 2 story was the economy at 16%—doubling coverage from the previous week. One of the key storylines was President Obama’s much-anticipated jobs speech, now slated for September 8. The scheduling itself became part of the story as the White House’s initial date of September 7 conflicted with a GOP presidential debate and was rejected by House Speaker John Boehner.

Those two top stories were enough to push down the third-biggest story of the week, Mideast unrest. The topic dropped to 10% from 26% the week before, when the fall of Libyan leader Muammar Gaddafi was the No. 1 story in the news. This past week, much of the reporting focused on the continuing search for the former dictator as pockets of fighting continued.

The presidential campaign was fourth-biggest story of the week, at 7%, a minor increase over the previous week (5%). Once again the newest Republican entrant, Texas Governor Rick Perry, dominated coverage. As is traditionally the case with a fast-rising political figure, the media took a harder look at Perry’s resume and record last week.

And the week’s fifth-biggest story (4%), coming just before the 10th anniversary of the 9/11 attacks, was the U.S. fight against terrorism. Some of last week’s coverage involved news of a study showing that New York City firefighters who were the first responders at the World Trade Center have a higher risk of getting cancer. Another 1% of the newshole was devoted to stories about activities surrounding the 9/11 commemorations.

Unlike some weather events, Hurricane Irene was the top story last week across the media generally. It was the No. 1 story in four of the five media sectors studied by PEJ, generating the most coverage on network news (26%), which traditionally devotes significant airtime to major weather disasters. The only sector in which the storm was not the top story was radio, where it still accounted for 23% of the airtime.

One key question as the Irene moved up the East Coast was whether the storm would land a direct blow on the nation’s biggest city, New York, which had evacuated some residents and shut down public transit.

On August 29, a New York Times story reported that while the city was spared the worst, other Northeast areas were not so fortunate. “Outside New York City, the storm’s wrath was stark. In New Jersey, more than 800,000 customers were without power on Sunday…In Connecticut, 670,000 customers had lost power –roughly half the state… Flooding in Philadelphia reached levels that had not been seen in that city in more than 140 years. Vermont was also struck particularly hard.”

In the days that followed, local outlets detailed the secondary impacts of the storm. 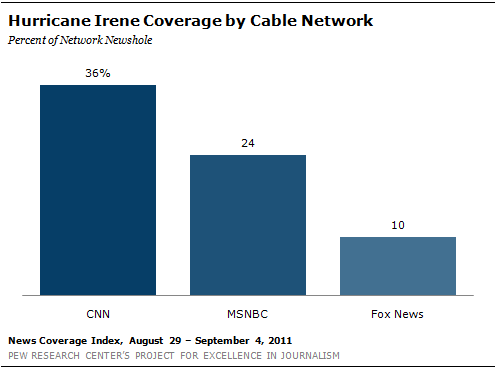 “Students will not be starting school on Wednesday as originally planned as the city continues to reel from the impact of Tropical Storm Irene,” reported the Hour newspaper in Norwalk Connecticut on August 30.  “The aftereffects of the storm—including massive power outages throughout the area –prompted Superintendent Susan Marks to close the district.”That evening, NBC anchor Brian Williams painted the big picture. “Devastated communities in shock after Hurricane Irene,” he declared before rattling off a damage report. “Forty three people are now dead, three million Americans still without power going into tonight, thirteen separate communities in the state of Vermont alone that are still cut off, there were seven hundred boat rescues today in just the state of New Jersey.”

Some media analysts had argued that the press overplayed the storm in the days leading up to its arrival, but the grim statistics and major disruptions caused by Irene seemed to quiet the  criticism. On August 30 the New York Times reported that Irene “will likely prove to be one of the 10 costliest catastrophes in the nation’s history.”

Irene also triggered a political debate that became part of the media narrative.

“If you`re Ron Paul, FEMA is a drain on taxpayers who shouldn’t ‘go crawling to the federal government if you mess up,” asserted Smerconish. “But we…have been calling Republican governors and members of Congress whose districts were in Irene`s path, and none have said that they plan to reject government help. It seems they understand the idea that people hate the government until they need the government.”

At the same time, Democrats and Republicans sparred over House Majority Leader Eric Cantor’s call for spending cuts to offset the costs of federal disaster relief. That triggered an August 31 Fox News Channel story asserting that this is likely to become another contentious partisan issue by “setting the stage for a showdown in a budget-stingy House when it returns from its August recess.”

Jobs were the biggest aspect of economic coverage last week, with particular focus on President Obama’s planned nationally televised speech September 8. That speech touched off some political drama last week when the White House acceded to Speaker Boehner’s request to push the address back one night—a decision that triggered more commentary about a subject that is increasingly become part of the president’s media narrative. Is Obama too willing to compromise and too easily pushed around?

As for the speech itself, with a lot of grim news on the jobs front, analysts have already raised expectations, calling it a pivotal moment for the president. CNN’s Wolf Blitzer blogged last week: “I’ve been calling it a ‘make or break’ speech because jobs remains issue No. 1 in his bid for re-election and there are still so many millions of Americans out of a job… Unless the president can turn things around between now and November 2012, his re-election will be in very deep trouble irrespective of his Republican challenger.”

The focus on another political skirmish in Washington seemed to come in part at the expense of attention to the Middle East. Libya and the search for Muammar Gaddafi continued to dominate coverage of the region last week, but with the battle for Tripoli won by the rebels, press interest diminished substantially. Some news came out of Syria, where the government is still engaged in a violent crackdown on protestors. One story that made headlines was the defection of the attorney general from the city of Hama to the side of the anti-government protestors.

For the fourth week in a row, Rick Perry continued to be the featured Republican player in coverage of the 2012 campaign last week, registering as a dominant newsmaker in about one-third of the campaign stories studied by PEJ.  (To register as a dominant newsmaker, someone must be included in at least 50% of a story.) The Texas governor has generated attention for his quick rise to the top of the GOP presidential polls, but last week, the media also began subjecting him to a harsher glare. That included a story on the Politico site questioning Perry’s intellect.

Finally, a series of stories—many pertaining to 9/11, including the study about increased health risks to firefighters—contributed to the coverage of the U.S. fight against terrorism last week. 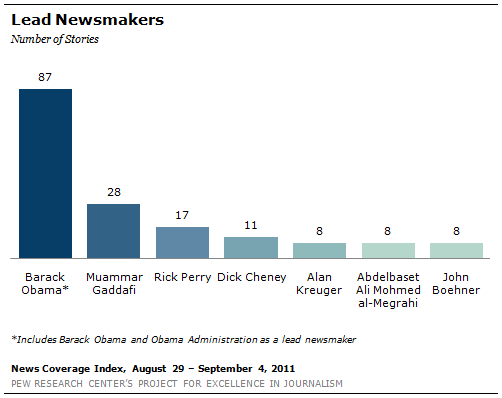 From August 29-September 4, in the run-up to his big speech on jobs and the economy, Barack Obama showed up as a dominant newsmaker in 10% of all the stories studied by PEJ. (That was up substantially from 4% the previous week.).

Even in hiding, Muammar Gaddafi continues to make news, last week releasing a tape exhorting his followers to continue the battle against the rebels. He was the second-leading newsmaker, at 3%—although that was down from 7% one week earlier.

Rick Perry was No. 3 (2%), marking the fourth consecutive week in which the newly minted candidate has showed up among the top five overall newsmakers. And former vice-president Dick Cheney, whose new memoir provoked controversy and included criticism of other members of George Bush’s Administration, was the fourth leading newsmaker at 1%.