Twitter users overwhelmingly focused on the U.K. riots last week, and many of them were highly angered by and critical of the chaos. While much of the mainstream news coverage involved an exploration of the causes of the anger behind the riots, social media users were much more intent on denouncing the destruction that left five people dead, more than 3,100 arrested and an estimated £200 million worth of property damage

For the week of August 8-12, the British riots were by far the most discussed subject on Twitter, according to the New Media Index from the Pew Research Center’s Project for Excellence in Journalism. The subject was so dominant that it was among the top five stories each day last week and appeared on the top story lists six times more often than the next largest subject, Twitter itself.

In addition, the five most popular news-related videos on YouTube last week were all related to the riots. 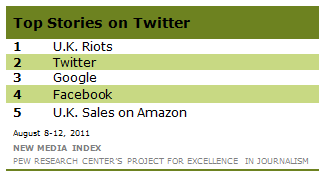 This report marks the second week of PEJ’s new methodology for determining the most discussed stories in social media. (For a detailed explanation of the process, click here.) In addition, this analysis of Twitter utilizes computer technology from the media monitoring firm Crimson Hexagon that was used to examine the key components of the Twitter conversation during the seven days following the start of the riots.

The unrest, which lasted five days, began during an August 6 protest outside a Tottenham police station following the death of Mark Duggan, who was shot and killed two days earlier by police during an investigation into crime in the black community. After several hours of protests, violence and looting broke out. Some present said the impetus for the rioting was an incident involving a 16-year-old woman who confronted police, but was attacked with shields and batons. Others attributed it to a more aggressive crowd that arrived after the initial protest.

The analysis using Crimson Hexagon found there was little concern about the causes of the riots and the possible grievances of those involved. Indeed, that accounted for only 8% of the conversation on Twitter. 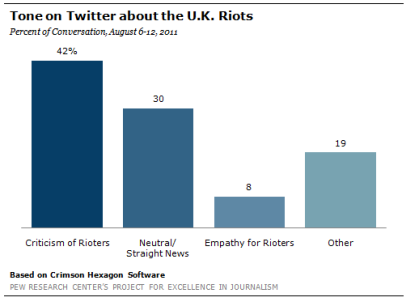 By contrast, 42% of the conversation on Twitter was critical of what was taking place. Less than a third, 30%, was made up of neutral comments or straight details without injecting opinion.

On Twitter, where users are limited to 140 characters, tweets typically involve the passing along of information and news. However, in this instance, there was far more condemnation than the straight conveyance of details.

“Low lifes in north london rioting, how stupid are these people, they’re causing destruction to other life!” declared Chloe Short.*

“Riot implies some sort of cause, whereas this is just hooliganism and looting. Let’s not dignify these cretins without a cause,” posted @redndead.

Riots in the U.K.

Several popular links helped spark the Twitter conversation about the rioting last week. One was a pictorial on the Boston Globe web site showing images of the clashes with police and the ongoing destruction. Another was a BBC report that quoted two participants as saying they were involved because they were showing police and “the rich” that “we can do what we want.”

Also popular was a YouTube ” target=”_blank” rel=”noopener noreferrer”>video showing looters pretending to help an injured student while also stealing things out of his backpack. Other Twitter users linked to a blog post by journalist Laurie Penny, who wrote about being trapped in her house, and a column by Peter Oborne, the Daily Telegraph’s chief political commentator, who stated it was hypocritical for members of the British political class to assert they had nothing to do with the causes of the riots when moral decay at the top of society is quite prevalent.

Many of the Twitter comments called for swift action against those involved.

“It’s beyond a joke,” declared Ian Abrahams. “Police & army need to act with a heavy hand – water cannon, bullets whatever will end this lawlessness.”

“Seriously, declare a curfew time, anybody out after that gets filled in, fair game for the riot squad. This is robbing not protesting!!!!” advised Joseph Barton.

“I’m really scared and I don’t even live in london…god knows how the people of london feel,worried if the riot will start at their road,” tweeted Jake Collins.

About a third of the negative conversation included direct pleas for the chaos to end.

“Everyone in London i hope you’re all ok please be careful and stay safe and i hope the riots stop soon♥ You’re in our thoughts,” shared Rachel Merrygold.

While a much smaller presence, there were some who empathized with those taking part in the riots.

“What about the 16 year old girl who was attacked by the police shortly before crowds charged the police & started to riot on Saturday,” asked Lataya Sinister.

“It is not just its damaged youth, but Britain itself that needs a moral reformation,” wrote Vicky Smith with a link to Oborne’s piece in the Telegraph.

The U.K. riots also dominated attention on the video sharing site YouTube last week. All five of the most watched videos focused on the chaos.

The top video showed a group of men in East London pretending to help a 20-year-old Malaysian student named Ashraf Haziq, who was reeling from an earlier attack, while they simultaneously stole items from his backpack. One man, Reece Donovan, has been charged with robbery in connection with the August 8 incident.

The No. 2 video features an August 9 BBC interview with West Indian writer and broadcaster ” target=”_blank” rel=”noopener noreferrer”>Darcus Howe in which he calls the riots an “insurrection” that was caused by unfair treatment of black teenagers by police.

The fifth-largest subject on Twitter last week was also tied to the unfolding mayhem in the U.K., at least as far as Twitter users were concerned.

A list of popular sporting goods on the British version of Amazon.com drew significant attention. On August 10, there was a huge increase in the number of baseball bats sold in the U.K., and Twitterers quickly connected the increase to the current events.

“Interesting shift in sales on Amazon.co.uk in response to riots,” observed Colby Almond.

“Does not bode well for tonight, surely. Shocking and terrifying,” added Hadley Freeman.

The other top subjects on Twitter were all tech-related, most of which highlighted new functionalities for social networking sites.

The No. 2 story was Twitter itself. Much of the attention focused on a web site called Twocation, which allows users to discover where their followers are located geographically.

The No. 3 topic was Google as many Twitterers highlighted a post on the company’s official blog announcing that their social networking site, Google+, is adding games.

Another major social networking site, Facebook, was the No. 4 subject as two stories drew attention. One was a Mashable report on a study suggesting that teens who “overdose” on Facebook could wind up with psychological disorders. The other was a new mobile phone application that lets users send messages to others through Facebook. (The same subject was the fourth-biggest story on blogs last week as well.)

The Week’s News on Blogs

The 2012 presidential election was the most popular subject on blogs last week, and two campaign-related articles drew the most attention. 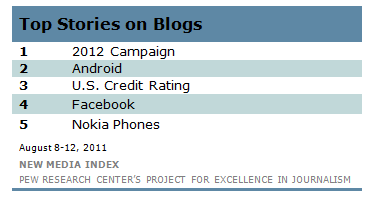 One was a lengthy New Yorker profile of Republican candidate Michele Bachmann chronicling her transformation from a “Tea Party insurgent” to a serious presidential contender. Bloggers differed as to whether the piece was a fair representation of Bachmann.

The other was a Politico story that quoted unnamed advisers to President Obama saying that his re-election campaign strategy will be made up of a “ferocious personal assault on Mitt Romney’s character and business background.” Some took this story to mean that the Obama Administration was anticipating a Romney nomination.

Stories about the Android mobile phone devices constituted the No. 2 subject as bloggers linked to a blog post on Android Police that included exclusive screen shots of the company’s upcoming Ice Cream Sandwich device and an Ubergizmo review of Motorola’s Droid X2.

The downgrade of the U.S. credit rating by Standard & Poor’s was the third subject with much of the attention going to a blog post by New York Times columnist Paul Krugman, in which he criticizes the move and claims the ratings organization is not worthy of passing judgment.

The No. 4 story on blogs was the introduction of Facebook’s new mobile Messenger app while the fifth-subject was about Nokia phones including a report that the new Nokia N9 phone will not be released in the U.S.

To see the new methodology for how PEJ arrives at the list of most discussed stories in social media, click here.

This special edition of PEJ’s New Media Index utilizes computer technology from the media monitoring firm Crimson Hexagon. Based on an examination of more than 3.6 million Tweets, this report goes beyond the normal methodology of PEJ’s index to look at the specific themes and tone of conversation related to the situation in the U.K.

Crimson Hexagon is a software platform that identifies statistical patterns in words used in online texts. Researchers enter key terms using Boolean search logic so the software can identify relevant material to analyze. PEJ draws its analysis samples from hundreds of millions of publicly available Twitter posts. Then a researcher trains the software to classify documents using examples from those collected posts. Finally, the software classifies the rest of the online content according to the patterns derived during the training.

According to Crimson Hexagon: “Our technology analyzes the entire social internet (blog posts, forum messages, Tweets, etc.) by identifying statistical patterns in the words used to express opinions on different topics.” Information on the tool itself can be found at http://www.crimsonhexagon.com/ and the in depth methodologies can be found here http://www.crimsonhexagon.com/products/whitepapers/.

The time frame for the analysis is August 6-12, 2011, which is different than the normal NMI week, Monday through Friday.

PEJ used the following list of keywords in a Boolean search to narrow the universe to relevant posts:

London OR UK OR riot OR “police shooting” OR Britain

News Use Across Social Media Platforms 2017

By Nearly 3-to-1, Bloggers Criticize Obama’s Withdrawal Plan for Afghanistan