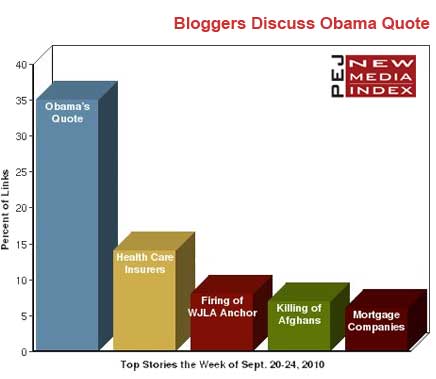 A new book by Bob Woodward examining the Obama Administration’s internal debate over the Afghanistan war triggered a torrent of criticism of the president by conservative bloggers last week.

From September 20-24, more than one-third (35%) of the news links on blogs were about Woodward’s book, Obama’s Wars, making it the week’s No. 1 subject, according to the New Media Index from the Pew Research Center’s Project for Excellence in Journalism.

In his book, Woodward—a Washington Post associate editor and half of the famous reporting duo that unraveled the Watergate cover-up—depicted significant divisions and debates within the administration as Obama tried to formulate a strategy in Afghanistan. He ultimately decided to send 30,000 more troops to the country.

But the bloggers who dominated the conversation last week focused largely on one quote from Obama printed in a Washington Post article on the book: “We can absorb a terrorist attack. We’ll do everything we can to prevent it, but even a 9/11, even the biggest attack ever…we absorbed it and we are stronger.”

In a series of critical and often angry posts, many bloggers seized on that passage to argue that the president is indifferent to whether America is attacked by terrorists again. It was somewhat similar to criticism of Obama voiced by such well-known Republican figures as Liz Cheney, the former Vice President’s daughter, and ex-New York City Mayor Rudy Giuliani.

The tone of the online conversation over politics and public policy can often vary between partisan ferocity and an almost-wonkish dissection of the issues. Last week was an example of the former.

The other top subjects on blogs last week included two stories from the Washington Post about companies behaving badly. In second place, 14% of blogs linked to a September 20 story about major health insurers deciding to stop offering new child-only health plans rather than comply with rules in the new healthcare law requiring plans to accept children with preexisting conditions.  The No. 5 story (6% of links) was a September 22 article about some of the nation’s largest mortgage companies using a single document processor who said he signed off on foreclosures without having read the paperwork.

The blogs linking to the health care story came from both sides of the political spectrum.  Conservatives derided the outcome saying it was another example of the problems with “ObamaCare,” while liberal bloggers saw it as evidence of greedy insurance companies.

All the top blog subjects were linked to pieces in the Washington Post, which tends to be a popular source for bloggers.

In many weeks, technology-related news leads on Twitter, and last week, one such storyline completely dominated. 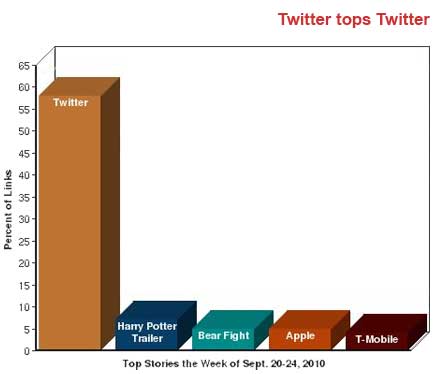 The top Twitter story by far last week, with 58% of links, was about a security flaw on Twitter that redirected users to third-party websites without their consent. The tweets, mostly links to a Mashable article, served as warnings to other users.  Although it was not linked to nearly as often, there was also a CNET article on the subject.

A recent PEJ study on technology in the media found that Twitter itself was the top technology storyline on Twitter from June 2009 through June 2010, accounting for 15% of the stories. But rarely does it monopolize the news agenda to the degree it did last week.

The second-biggest Twitter topic, 7% of links, was about Mashable’s posting of the new trailer for the upcoming Harry Potter and the Deathly Hallows movie. The No. 3 story (5%) was a BBC article about a woman who successfully fought off a bear with a zucchini, No. 4 (5%) was a Wired story about  Apple approving a media player for the iPad and the fifth story (4%) was also a Wired story about T-Mobile claiming it had the right to censor text messages.

The Woodward Book and Obama

Almost all of the reaction to Bob Woodward’s new book in the blogosphere came from Obama opponents and virtually all of it homed in the quote, “We can absorb a terrorist attack.” Bloggers strongly criticized the president, and some cases, questioned his patriotism.

“To me, this is like saying 9/11 wasn’t so bad after all,” wrote a Few Figs, “not a good mindset if your highest duty is to protect the citizens of your country, [in my opinion].”

Brian Kelly of Libertyblog thought the Post should have written about the quote more prominently writing, “‘We can absorb a terrorist attack.’ Obambi thinks so, Bush didn’t, and moved heaven and earth—waterboarding, wiretaps, wars—to prevent one. The Washington Post put the quote in paragraph six of a story about Bob Woodward’s new book. Drudge put it in red letters at the top of his page. Enough said.”*

“Obama is 2010’s Nixon. There are no protests because there is no draft, and the military is a tiny percentage of our population. Our callow nation pays false homage to the sacrifices our volunteer military makes while voting in those that will abuse that service. It’s sick, frankly. It says much about Obama, and even more about us,” wrote Ken Nelson on his blog.

One blogger made a sports analogy to Obama and Bush’s presidencies:

“George Bush was a baseball fan, and when he ordered the Iraqi surge in 2007, he was three runs down, bases loaded, behind in the count and swinging for the fences. Having essentially committed his reserves, the country was all in—there were virtually no troops left to deploy that could be maintained on a sustainable basis.

“Barack Obama is a basketball player and it now seems clear that he chose a different strategy, the fadeaway jumper: If the ball goes through the hoop, so much the better, but if it does not, the player’s momentum takes him back to his own side of the court, ready to play defense,” wrote Neptunus Lex.

“Americans should be concerned,” Jack the Blogger at the Western World wrote, “It appears that Obama is letting politics decide how to protect our country and win a war.”

Twitter was also the subject of the No. 1 news video on YouTube, with an advertisement for the new Twitter homepage that featured the ubiquitous Twitter bird logo. That clip generated more than 1.59 million views.

The first video, with more than 580,000 views, was a 1999 clip from a Bill Maher’s show, Politically Incorrect. In the clip, O’Donnell says that she “dabbled into witchcraft.”

O’Donnell was also a focus of attention in the mainstream media last week, appearing as a lead newsmaker in 4% of all the stories examined by PEJ, generating more attention than anyone other than Barack Obama. To be a lead newsmaker, someone must be featured in at least 50% of a story.

Note: Due to a capture error, no stories from Monday, September 20, 2010, were included in this week’s sample.