A look at President Barack Obama’s social life three decades ago was a hot topic on blogs last week.

The online conversation began after Vanity Fair published a selection from author David Maraniss’ new book-Barack Obama: The Story-in the June 2012 issue of the magazine.

The excerpt went into great detail about Obama’s relationships with two girlfriends in New York City shortly after he graduated from Columbia University in 1983. The author quotes from letters Obama wrote to one of his girlfriends, Alex McNear, as well as passages from the diary of another girlfriend, Genevieve Cook.

For the week of April 30-May 4, the Obama story was the No. 2 subject on blogs, according to the New Media Index from the Pew Research Center’s Project for Excellence in Journalism. The wide range of reaction from bloggers included positive and negative assessments of Obama and evaluations of his letter-writing style as well as commentary on the work of Maraniss, who also authored a biography of Bill Clinton.

Another political story was popular on blogs for the week. Bestselling horror author Stephen King wrote an opinion piece for The Daily Beast on how the super rich, including himself, should be taxed more. Those sentiments generated a mixed response in the blogosphere.

The Maraniss book excerpt generated a discussion on both sides of the political spectrum and for some-mostly conservative-bloggers, the piece provoked criticism of the president.

“So, let me get this straight: in addition to all the vacations, all the golf games, non-stop fundraising and the continuous campaigning, as well as taking time out to pick the winners of college basketball games, President Obama has room in his schedule to reminisce about his old flames. Good thing he doesn’t have a demanding job!” wrote CanadianCincinnatus.

Some writers were also critical of Obama himself, but in more of a playful manner. In particular, they responded to the letters to McNear, which were written with an intellectual and philosophical tone.

“OMG. Is this the sort of thing English professors have to wade through all the time? How do they stop their eyes from rolling long enough to finish grading papers?” wrote The Skeptical Bureaucrat, “Young Mr. Obama would have been better served by watching some Woody Allen movies with his girlfriend and cutting back on all the abortively pedantic letter-writing.”

“Everyone in college is a self-absorbed internationalist with delusions of grandeur. That’s what college is for. To give you the self-esteem you’ll spend the rest of your life losing,” wrote Emily at NakedDC, “But Barack Obama was truly a piece of work. Not only did he wear Brut cologne and spend his Sundays sitting around his apartment doing the New York Times crossword in a sarong…but he wrote poetry to his college girlfriend…that reeked of a rudimentary liberal arts education.”

“Good Lord! Who writes this stuff to a girlfriend?” asked roxannadanna at Diary of a Mad Conservative.

Other bloggers were more critical of Maraniss, who authored a well-known 1995 biography of Bill Clinton, than they were of the president.

“On the whole, the article is a monotonous fluff piece highlighting twenty something year old Barack Obama meanderings around New York City back in the 1980s,” wrote Mr. L’s Tavern.

“What is the world coming to when we can all buy a book and read about President Barack Obama’s sex life as a 22 year old?” asked Missy Mistique.

And there were some readers who were impressed by the article and the president.

“I thought it was an exceptionally well written piece. It uses interviews with Obama, his old girlfriends, and his bestseller, Dreams of My Father to piece together an image of a man in search of self. I think the thing that struck me was the fact that Obama was constantly questioning and searching for a sense of place, amazing considering the man he is today but on some level all people who are either bi-racial or culturally displaced go thought this process of self-evaluation at some point in their life,” wrote Ghillyb. 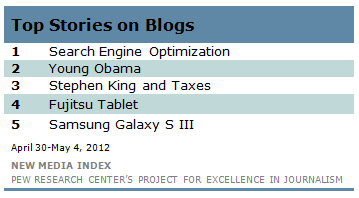 niversity and it was so relatable!” wrote Lily, “He was also drifting from job to job that paid the bills but held no meaning until life grabbed him…and took him to Chicago (where the first Black mayor was elected earlier that year) and the city had a need for community organizers.”

And a few bloggers weighed in with disappointment that this chronicling of Obama’s love life wasn’t quite as sensational as they hoped.

“Well, this has got to be good, right? What could be steamier than getting it on with the future leader of the world? Plus, Obama is HOT. So let’s hear what his ex-gf…has to say… Eh? Where’s the late night hang up calls and slashing of tires? Something? I’m getting a bit frustrated now. Okay, a LOT frustrated.” wrote Kiri Blakeley at The Stir.

“Why is this woman culturally significant simply for having dated the President nearly three decades before he was the President? The answer might lie within society’s sex obsession, its compulsion to privy increasingly deeper into the personal lives of prominent figures, and its gradual transformation into a gossip rag reality show. I, for one, was indeed guilty of hankering for the juicy details. Too bad there were none,” wrote DANA JEANius.

Other Top News Stories on Blogs

The No. 3 story on blogs for the week was a piece bestselling author Stephen King wrote for The Daily Beast, scolding the super rich for not paying enough in taxes and warning of an apocalyptic scenario if inequality is not addressed.

The response on blogs was mixed. Some were supportive of the author’s jump into a political forum.

“It seems to me Stephen King should start a political blog. I’d read it,” wrote Steve Benen at The Maddow Blog.

But others had a dimmer view of King’s sentiments.

“How the person that wrote this poorly researched piece of garbage Monday could in any way be related to the genius – yes, I said genius – that totally enthralled and captivated me with ‘11/22/63′ boggles my mind,” wrote Noel Sheppard on News Busters.

The other top stories on blogs last week were all tech related. The No. 1 story was news about search engine optimization.

At No. 4 was discussion about a new tablet from Fujitsu. And wrapping up the top five subjects on blogs last week was excitement over the not-yet-released Samsung Galaxy S III cellphone. 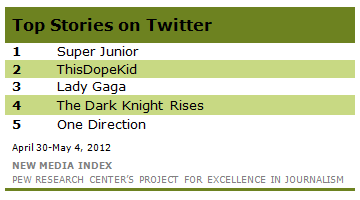 Twitter remained a bastion of celebrity news last week, with tweets from a few pop musicians dominating the list of top subjects, which also included a movie preview.

Perennial Twitter boy band superstars Super Junior were No. 1 with several tweets, including a video and photo of one of the band members dressed in Marilyn Monroe drag.

At No. 3 were two tweeted photos from Lady Gaga, one where she wishes her fans, or “little monsters” a good night.

And One Direction, another Twitter favorite boy band, came in fifth place with a photo of a creative clock, tweeted by one of the group members.

The No. 2 subject was two tweets from user ThisDopeKid, who tweets “deep posts” that seem aimed primarily at teenagers. Last week’s included a photo about having strong feelings and another about cuddling.

The No. 4 subject was a “>movie trailer from the new Batman movie due out this summer, The Dark Knight Rises, starring Christian Bale as Batman and Anne Hathaway as Catwoman.

Anti-government protests in Kuala Lumpur, Malaysia dominated YouTube last week, accounting for three of the five most popular news-related videos. Thousands of people rallied on April 28 to demand electoral reforms ahead of national elections that could be held as early as June. The demonstration–which started out peacefully and was organized by the Coalition for Clean and Fair Elections-turned violent after protesters and police clashed in the Malaysian capital.

The No. 1 news video showed a police car losing control after being attacked by protesters and crashing into a wall. The No. 3 video showed riot police firing a water cannon and tear gas at a crowd, which had broken through the barricades and barbed wire sealing off the city’s historic Merdeka (Independence) Square. The fourth most popular video showed two versions of the BBC World News report about the Malaysian protests, with the BBC’s original broadcast on the left and the censored version aired by the Malaysian satellite television, Astro, on the right.

The 2012 White House Correspondents’ Association Dinner in Washington, D.C, on April 28 also drew considerable attention on YouTube. The second-place video, from C-SPAN, was footage of President Obama’s remarks poking fun at himself, other politicians and the media. The No. 5 video featured emcee Jimmy Kimmel, host of the ABC late-night talk show “Jimmy Kimmel Live!” delivering remarks at the same event as he joked about the president, the General Services Administration and Secret Service scandals and Mitt Romney.