On Wednesday, July 22, the Senator Theater, a historic but financially troubled movie house in North Baltimore, was sold at a sidewalk auction for $810,000.

The city, the winning bidder, immediately said it hoped to find someone to operate the old theater or even to buy it.

The auction itself was a kind of theater, held on the sidewalk and accompanied by protests. Baltimore media provided extensive coverage, coverage that showed how differently different media can define news.

Lessons from the coverage

The Senator Theater had captured the attention of the local media for years, mostly for its money problems.[1] And the city was already deeply involved. Back in March, when the theater fell behind on its loan payments and the bank initiated foreclosure procedures, the city stepped in, buying the mortgage for $950,000 and putting the theater up for auction.

The auction was held on Wednesday, July 22. When only one bid materialized—for $800,000—the city quickly submitted its own bid for $810,000 to protect its investment, and officials said they would request proposals for a new owner or operator.

The idea that the city could end up the winner of its own auction should hardly have been a surprise. The possibility had been mentioned in news stories for months.[2]

Even on the Sunday before the auction, the Sun published a 776-word advance story that noted the possibility that the city could come to buy the theater itself if sufficient bids from others were not received:

Baltimore City, which bought the theater’s mortgage from 1st Mariner Bank in May, has about $1 million invested in the theater and likely will not sell it if it’s unable to get at least that much at auction. Should no new owner emerge Wednesday – and several city officials have said it is unlikely anyone would be willing to pay more than $1 million for the Senator given current economic conditions, the cost of needed repairs to the building and the borderline profitability of a single-screen urban movie house – there will be a nationwide search for someone to come in and operate it.

But few other media picked up on the point. Even the Sun, by Tuesday, had largely dropped the angle.

Of the 15 stories identified that ran before the auction, only three raised the prospect of what ended up happening.

Most media instead followed false trails about what might occur, particularly the prospect of a bid from a local college, which was echoed on the Twitter feeds of insidecharmcity.com and WJZ-TV and reported on the websites of a local news radio station and the Baltimore Business Journal and on two local TV newscasts.[3]

In the end, only one bid other than the city’s was submitted—by an unidentified buyer, for $140,000 less than the city had paid months earlier. Loyola officials said they did not bid.

The Baltimore Sun posted a short story to its website at 11:46 a.m. It updated the account about an hour later with a longer version that noted the bidding was contentious. Short stories, 200 to 300 words, soon followed on the sites of the Daily Record, the local business paper, WYPR.org, the website of a public radio station, and at 4:09 p.m., on the website of WJZ-TV. About the same time, WBAL Radio updated its short story, including links to video and an excerpt from the mayor’s statement about the sale.

More substantial accounts soon began appearing. The Baltimore Business Journal was first to report on likely next steps. An account posted on its website shortly after 4 p.m. reflected interviews with sources at the scene and elsewhere and contained significant details about what was likely to occur next.

That night, the four network-affiliated local TV stations produced stories all mainly focused on video of protesters at the auction.

The day after, some longer accounts appeared. Baltimorebrew.com, a local news website created by a former Sun and Washington Post reporter, posted a 691-word account rich in color and detail about the auction itself and included multi-media components such as links to photos and a YouTube video snippet.

The Daily Record looked ahead to the 45-day process by which the auction would be certified by a court. It also discussed the city’s plans to issue a formal “request for proposals” from people interested in buying or operating the theater and even quoted people who had seen drafts of the RFP:

According to those who have seen drafts of the RFP, it calls for an operator that will run the Senator for educational, arts and entertainment purposes.

“Our concern is that the facility continues to be used as a film or entertainment facility of some sort, and that seems to be reflected in the RFP,” said Mike Wicklein, a member of Senator Community Trust, a nonprofit formed in February to raise money for the theater’s operations.

The Baltimore Sun also tried to advance the story. Its lengthy 1,326-word story the day after the auction also explored the city’s plans—and included the only voice of dissent in the media regarding the city’s action.[4] It quoted the city comptroller, Joan Pratt, who argued that the city should have cut its losses and sold the theater for $800,000 to the sole bidder:

"We know that the city does not have funds to operate, maintain and retrofit a movie theater….”

The city’s already lean budget is expected to take another hit, with [Baltimore Mayor Sheila] Dixon asking all of her agency heads to identify 5 percent cuts from their spending plans.

Kimberly Clark, an executive vice president at the Baltimore Development Corp., said that the city will likely have to spend more money to make capital improvements to fix the theater, though she will not know how much more until the city can properly assess the building.

The Sun also posted a commentary from its movie reviewer about the cultural contributions of single-screen theaters and an editorial questioning the city’s purchase and hopes for recouping its investment, both of which were published the paper the next day. Two columnists also weighed in. One, on Saturday, assembling a list of other cultural attractions the city had tried but failed to save, warning that the success of such ventures had been highly inconsistent. The other, on Sunday, ended a busy week of coverage by raising the prospect of “Senator fatigue” if a solution couldn’t be found soon by the city.

Interest in the theater’s fate prompted widespread coverage across every media sector. But print outlets drove this narrative, and much of what appeared elsewhere was duplicative and contained no new information for the reader or viewer. 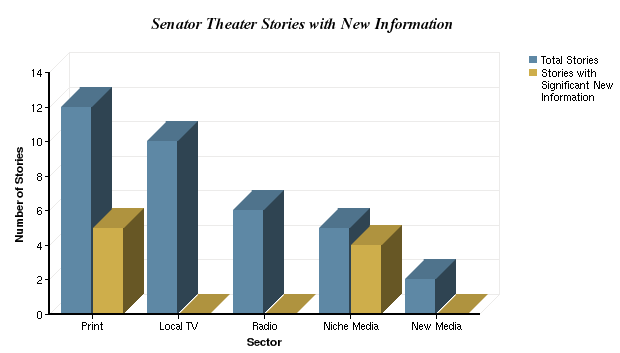 In all, the study found 35 stories by 18 media outlets on the sale during the week. Just nine of the stories, roughly 25%, provided significant new information.  All of these were produced by news organizations associated with print outlets.

The Sun produced five, the Daily Record three and the Baltimore Business Journal, one. [5]

The rest of the media merely repeated what had been reported elsewhere.

In general, the papers wrote more—measured by total words—and used more sources. The Sun averaged 2.4 sources per story and the Daily Record four. And they were the only media organizations to produce stories citing at least five sources. The Sun’s long Thursday piece cited nine—including several city officials, business leaders and people who were thought to be interested in the theater but chose not to bid.

The auction itself lasted only a few minutes and made for colorful sound bites and video. The proceedings received widespread coverage across media sectors – but the news a consumer received in this case depended greatly on the type of media he or she relies on.

Television viewers received accounts that focused chiefly on the protests taking place during the auction. Not one of the TV stories analyzed, however, gave the city or auctioneer an opportunity to respond to the videotaped accusations by protesters that the bidding had been rigged.

There were only two accounts from online-only sites, the 691-word story in the BaltimoreBrew.com, and a link to a Sun story on examiner.com. Baltimore Brew’s auction coverage offered interactive features and some of the voice and attitude familiar to regular visitors to the blogosphere:

Spectators who came to the auction of Baltimore’s Senator Theatre yesterday expecting melodrama were not disappointed. They found a plastic vulture waiting for them in the lobby of the financially-troubled movie house, a woman in a long red cape sobbing outside and another Senator supporter, a blogger known as “AstroGirl,” wryly knocking back a late-morning Natty Boh. “Louder!” “We can’t hear you!” “This is rigged!” people yelled, during the brief auction. Others yelled at them to be quiet.


Perhaps the most heart-stopping moment came just as auctioneer Paul Cooper was beginning his rapid-fire description of the building when a man in a wheelchair – artist Dan Keplinger, the subject of the Academy Award-winning documentary “King Gimp” – howled his outrage at the proceeding.

And who made news on the Senator theater story? The city drove nearly all of the coverage, 94% of the stories during the week. There was not a single story initiated by the press as an enterprise story.

1. The Senator Theater opened in 1939 in north Baltimore and is on the National Registry of Historic Places. But it has struggled financially as a single-screen theater in an industry dominated by multi-plex movie houses that have the ability to attract ticket-buyers with several movies at once.

2. For example, the Baltimore Business Journal reported on May 14, 2009: “Baltimore City is already planning to solicit bids to buy and redevelop the Senator Theater. That’s because the city does not expect a buyer from an upcoming auction.”

4. The Sun typically posts all the content of the day’s edition early in the morning. The Daily Record, which has earlier deadlines, does so the evening before.

5.  The Baltimore Business Journal is a weekly publication and its edition for the study week contained no reference to the Senator Theater. Its website, however, provided the earliest detailed version of the story that went beyond the basic facts.

Next: Listening Devices on Buses?
← Prev Page
Page1Page2Page3Page4You are reading page5Page6Page7Page8
Next Page →