On Wednesday, July 22, the University of Maryland, Baltimore announced that it had been selected as one of eight sites nationwide that would test a new H1N1 vaccine. The study, funded by the National Institutes of Health (NIH), would conduct a trial of vaccines from two different manufacturers. The university publicized its plan to begin the testing immediately with the goal of recruiting around 1,000 volunteers. The trial would take place at the university’s Baltimore campus (UMB) at the Center for Vaccine Development.

Lessons from the coverage

The university announced the swine flu program the morning of Wednesday, July 22. At noon, the Maryland Daily Record, a five-day-a-week newspaper focused on a handful of specialty business beats, including law, real estate, biotech and health care, posted the first story on its website. The 603-word report covered the basic facts, including how the vaccine doses would be administered and the impact of H1N1 in Maryland and elsewhere. 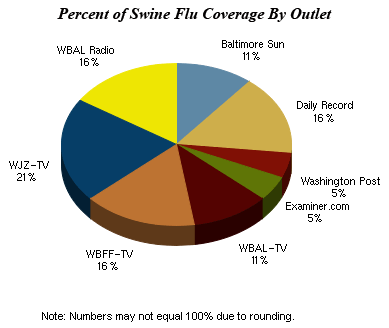 By mid-afternoon (2:25 p.m.) the Baltimore Sun had weighed in with a sparse report on its website also based largely on the university news release. Roughly 90 minutes later, (3:57 p.m.) WJZ.com, the website of the local CBS affiliate, published a story that covered the basic facts.

The Washington Post also ran a story on the vaccine trials the next morning in its print edition. Of the 19 stories in PEJ’s analysis, seven were from newspaper print editions or websites. Nine were from local TV websites or broadcasts. The rest appeared on local radio websites. No story appeared in any local blog captured by the study.

The next day—Thursday, July 23—the Sun produced the most thorough treatment of the vaccine trial to appear all week. The 1,265-word Page 1 story contained interviews with sources that had not been featured before, including Dr. Anthony Fauci, director of the National Institute of Allergy and Infectious Diseases. Reporter Kelly Brewington provided information about the other stakeholders involved in other nearby testing sites in Frederick and Annapolis. She revealed the name of the drug maker that would provide the vaccine, Sanofi Pasteur.

The Sun was also the only outlet that directly addressed the unknowns related to the vaccine, like safety concerns that are an issue when a vaccine is rolled out rapidly.[1] “There are unanswered questions about the campaign” and “There’s still a lot that researchers don’t know about the new virus,” wrote Brewington. The article also described the reported side effects of a vaccine for a 1976 swine flu strain.

More stories appeared that day as well but few provided any new information.

The Daily Record’s print edition expanded on its Wednesday web story, but not by much. It elaborated slightly on the spread of the flu thus far in Maryland and beyond. And it included a quote from John M. Colmers, secretary of Health and Mental Hygiene for the state. Local TV and radio websites, including wbal.com, foxbaltimore.com, wbaltv.com, and wjz.com, all posted or updated stories. But these contained few pieces of information not already reported in their previous evening’s newscasts or in other outlets.

By Friday, July 24, newspapers had stopped covering the testing. No more broadcasts aired, and only wbal.com still had a story on its home page.

With only a couple of exceptions, most of the reporting came from the university news release from the morning of July 22 and the press conference held on campus later that afternoon.

In part, this stemmed from technology making the news something that can be produced immediately. For instance, the university press release stated that “the research is a first step toward the U.S. government’s stated goal of developing a safe and effective vaccine,” and the Daily Record story echoed with “Research on the vaccine is the first step toward the U.S. government’s aggressive goal of developing a vaccine for the virus.”

The first account is out, largely the way the originating news source framed it, and that stands as the basic outline.

In the end, only a few of the news reports on the announcement advanced the story significantly. Out of the 19 analyzed, just three added any significant new information (another three added some new minor details).

Even hours later, the account from the university press release and press briefing still framed what people knew. That evening, for instance, the local TV news teams aired packages on the announcement, but these veered only infrequently from the basic details from the university.

Only WJZ-TV advanced the story somewhat. Reporter Mike Helgren focused more on the impact of H1N1 so far in the state of Maryland, like the number of illnesses and deaths so far. The story included an interview with a local victim of the flu, Lori Tritto, as well as Secretary Colmers. Instead of dwelling on the vaccine testing news, the secretary discussed the possible benefits to Maryland residents that such a vaccine could hold.

In print, only the Baltimore Sun story on Thursday was marked by a significant level of enterprise.

The story advanced mainly as new breaking news came in. Around 4 p.m. on Thursday, for instance, wbal.com reported that the university’s medical center was receiving calls from prospective volunteers. At 6:08 p.m., WJZ-TV aired information on a local company, MedImune, which would be producing some of the vaccine in nasal spray form.

It would not be until months later that questions about the safety of the swine flu vaccine would surface. This time, local outlets seemed to pay more attention, correspondent with a rise in public anxiety.

In all during the week, two-thirds of the stories originated from the University of Maryland. The university sent out a press release and followed that with a briefing. News outlets relied on these two points of dissemination for much of their reporting.

1.  WJZ’s 6 p.m. broadcast from July 23 also addressed the safety issue, though indirectly. The anchor mentioned that drug makers will begin studies to make sure the H1N1 version in its vaccine causes no more side effects than its regular version.

Next: The Auctioning of the Senator Theater
← Prev Page
Page1Page2Page3You are reading page4Page5Page6Page7Page8
Next Page →