Driven by increasing questions about whether the shooter’s background and behavior should have triggered louder alarm bells, the November 5 shooting rampage at Fort Hood topped the news for the second consecutive week.

The continued fallout from the attack that left 13 dead accounted for 20% of the newshole from November 9-15, according to the Pew Research Center’s Project for Excellence in Journalism. That represents a moderate increase from the previous week (15%), but those numbers are somewhat misleading since the story broke late in the week monitored in the November 2-8 News Coverage Index.

Nevertheless, the increased coverage last week suggests that the media is treating the Fort Hood case differently from a number of other violent crimes that have generated major coverage only to quickly fade from the headlines. Indeed, the single biggest crime story since the NCI began in 2007, the Virginia Tech massacre, accounted for 51% of the coverage the week it happened and plunged to 7% the following week. The fatal shooting at the Holocaust Museum in Washington, for example, filled 11% of the newshole the week of June 8-14, and dropped to less than 1% the next week.

Among the themes fueling the second-week coverage of the Fort Hood was the issue of whether authorities should have responded more aggressively to warning signs from Maj. Nidal Malik Hasan, including his repeated correspondence with a radical imam. Three related storylines—Hasan’s background, the role of his religion in the attacks and the question of whether he should have been seen as a ticking time bomb—accounted for about half the Fort Hood coverage.

For the second week in a row, the Fort Hood story had the effect of moving the three topics that had recently been dominated headlines—health care, Afghanistan and the economy—further down on the news agenda.

The fifth-biggest story was the administration’s decision to bring alleged 9/11 mastermind Khalid Sheikh Mohammed and four other terror suspects to trial in New York City. That subject accounted for 5% of the week’s coverage, but that number understates the intensity of the media attention to news that broke on Friday. Coverage actually accounted for 26% of the newshole from November 13-15, topping the news agenda in that two-day period.

From November 9-15, the aftermath of the Hasan killing spree was the No. 1 story in four media sectors—newspapers, online, cable news and broadcast news. But it was most prominent as a television story, accounting for 22% of the airtime studied on network news and 30% on cable. 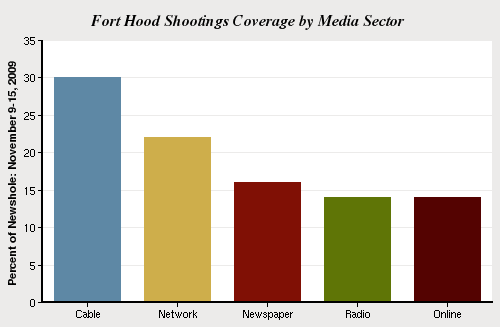 There were some major developments in the case last week, most notably the formal charging of Hasan with 13 counts of murder. And another aspect of the story that initially emerged in the media narrative came into question. News reports, including one in the New York Times, reported that the police officer who actually shot Hasan during the rampage may have been Mark Todd, rather than Kimberly Munley, who was originally identified as the heroic officer.

The media also spend a good part of the week trying to piece together the biography of the suspect. ABC News went on a tour of Hasan’s apartment, declaring that it revealed “traces of his conflicted private life…In Hasan’s living room, a crumpled prayer rug shared the floor with a paper-shredding machine….On a card table in the kitchen were coins from various countries, including Israel, and an empty package for a LaserMax gun sight, with a $229.99 pricetag. There was also a book about Islamic dream interpretation, "Dreams and Interpretations," by Allamah Muhammad Bin Sireen. Anwar al-Awlaki, the radical cleric in Yemen to whom Hasan had sent e-mails, has produced a lecture series on dream interpretation.”

The revelation that Hasan had been in touch with al-Awlaki fueled questions about whether officials should have scrutinized him more closely before the shooting.

A November 11 Washington Post story noted that “finger-pointing in Washington intensified Tuesday about whether officials at several agencies had failed to coordinate as they tracked the suspect’s activities or to react to possible warning signs in the months before the attack. [Hasan] came to the attention of two Joint Terrorism Task Forces in December, as he corresponded by e-mail as many as 20 times with radical imam Anwar al-Aulaqi, who has exhorted followers in the United States, Britain and elsewhere to pursue violent jihad, or holy war.”

“The task of vetting Hasan fell to a Defense Department analyst on the D.C.-area task force, who searched the doctor’s background, employment records and other paperwork,” the story continued. “The analyst concluded that the chatter was innocent, in keeping with Hasan’s research interests, and that he did not have links to terrorism, two government officials said Tuesday. Authorities closed the matter this spring, opting against a full-blown investigation.”

And in certain parts of the media landscape last week, most notably some talk shows, the failure to pre-empt the Hasan attack took on ideological or cultural overtones.

Conservative radio talk host Pat Gray, subbing for Glenn Beck last week, declared that “the only reason they didn’t [act against Hasan before the shooting] is political correctness. They’re worried about offending Muslims.”

Similar sentiments were heard on Bill O’Reilly’s November 12 Fox News show when analyst Bernard Goldberg attacked the media’s coverage of the case. “Every rational person in the entire country knows that Hasan shot up the place because he’s a Muslim terrorist,” Goldberg declared. But many journalists have tiptoed around the terror issue, he added, “because they don’t want to offend Muslims.”

The week’s No. 2 story was the economy, which filled 11% of the newshole, up modestly from 9% the previous week. It was the top story in the radio sector, accounting for 21% of the airtime studied.

Two storylines topped the economic coverage last week. One was the employment picture, a narrative fueled in part by the White House’s call last week for a summit on job creation. The second was the troubled financial sector, including news of the acquittal of two Bear Stearns fund managers on trial for fraud. The Washington Post noted that, “the verdict underscores the government’s challenge in making the case that Wall Street executives broke the law—rather than made bad decisions—in loading up on the risky investments that crippled the financial system.”

The third-biggest story, also at 11%, was coverage of the health care debate, which increased from 8% the previous week. That subject received its highest level of attention last week in the cable sector (19%). Last week, part of that coverage involved former President Bill Clinton—whose efforts at health care reform failed when he was in the White House—giving a pep talk to Democrats in the Senate who will soon take up the measure.

Coverage of the conflict in Afghanistan (No. 4 story at 7%) shifted from Afghan politics to U.S. policy. Last week, about two-thirds of the media’s attention was focused on Obama’s ongoing strategic deliberations, with accounts suggesting the President, as an Associated Press story put it, “does not plan to accept any of the Afghanistan war options presented by his national security team, pushing instead for revisions to clarify how and when U.S. troops would turn over responsibility to the Afghan government.”

The No. 5 story (at 5%) was one that generated major attention at the end of the week. Attorney General Eric Holder’s announcement that he will try five alleged 9/11 conspirators—including Khalid Sheikh Mohammed—in a civilian court in New York instantly became a polarizing issue that sparked debate over how to best combat terrorism.

“Holder acknowledged his decision to bring such high-profile terror suspects to the U.S.— reversing Bush administration policy—would raise strong opposition,” said a story on the USA Today site. “He suggested that defense attorneys would no doubt raise objections because Muhammed was subjected to repeated water torture and acknowledged there would be questions about the government’s ability to secure such a high profile civilian trial.”

“Within minutes of Holder’s announcement,” the story added, “the criticism was furious.” 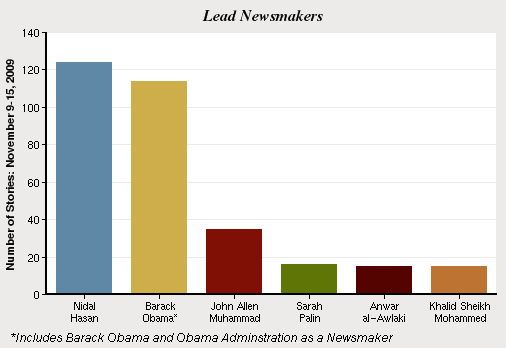 The No. 3 newsmaker (3%) was John Allen Muhammad, the so-called D.C. sniper who terrorized the Washington area during a 2002 killing spree. Mohammad was executed last week by lethal injection.

The week’s No. 4 newsmaker has displayed an ability to generate headlines. Publicity surrounding her new book, “Going Rogue,” made former Alaska Governor and GOP Vice-Presidential candidate Sarah Palin a lead newsmaker in 1% of the week’s stories.

The Army Base Massacre Dominates the Week