Two ongoing domestic policy stories and the emerging foreign policy challenge in Afghanistan are now regularly monopolizing the media’s attention. And if they haven’t completely eclipsed the rest of the news, they have made it more difficult for other topics to break into the headlines.

Last week, once again, the debate over health care, the war in Afghanistan and the economic crisis accounted for roughly 40% of the newshole studied by the Pew Research Center’s Project for Excellence in Journalism—the fourth straight week those subjects combined for that level of attention.

The health care battle was the No. 1 story last week, October 25-November 1, filling 16% of the newshole, according to PEJ’s weekly News Coverage Index. The war in Afghanistan was close behind, at 13%, followed by the state of the economy, at 12%.

In the past month, those stories have rotated position atop the news agenda. From Oct. 19-25, the economy was the No.1 story; a week earlier it was health care, and the week prior to that, Afghanistan was the most-covered topic. In that period—from October 5-November 1—they have commanded almost equal coverage—14% for health care and 13% apiece for Afghanistan and the economy.

Coverage of the battle over health care reform last week was driven by legislation unveiled by the Democratic leadership in the House of Representatives. 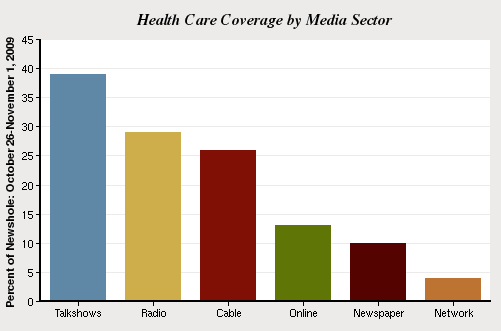 As the No. 2 topic last week, the conflict in Afghanistan continued its dramatic emergence in the news agenda. This marks the ninth week in a row the war has been a top-five story. And in the past two weeks, the narrative has broadened from a primary focus on the Obama administration’s strategic deliberations to more attention on events inside Afghanistan. Last week, the narrative was divided almost equally between the U.S. policy debate over Afghanistan and the escalating violence and combat in that country.

One of the key narratives in the coverage of the financial crisis, the No. 3 story of the week, was the introduction of legislation to regulate floundering financial institutions in the “too big too fail” category.

The No. 4 story (at 5%) was the swine flu outbreak, marking the second consecutive week it has finished in that spot. Much of the narrative was fueled by concerns about slower than expected production and distribution of the H1N1 vaccine. That was followed (4%), by coverage of the Obama administration, with some of the attention stemming from a Washington Times story reporting that some big donors were getting access to the White House.

The legislative battle over health care was the top story in three of the five main media sectors last week—online (13%), cable (26%) and radio (29%). The hottest political story in Washington, it was especially fodder for the talk culture. In the 13 cable and radio talk shows regularly monitored by PEJ’s News Coverage Index, the health care debate was the No. 1 story, filling 39% of the airtime studied, more than double the media overall.

The biggest news last week was the unveiling of the House health care bill. “Officials said the measure…would extend coverage to 96% of Americans. Its principal mechanism for universal coverage is creation of a new government-regulated insurance ‘exchange’ where private companies would sell policies in competition with the government,” reported an Associated Press story. “Federal subsidies would be available to millions of lower-income individuals and families to help them afford the policies, and to small businesses as an incentive to offer coverage to their workers.”

On the cable and talk radio airwaves, many of the hosts were arguing about health care reform in broad ideological terms. On his October 30 radio show, conservative Sean Hannity said “health care happens to be the means by which liberals want to reshape American society. And that is about the ends that they seek here.”

On his October 26 MSNBC program, liberal Keith Olbermann took aim at the insurance industry, declaring that the inclusion of a “public option” in Senate legislation would give “Americans an alternative to the soaring premiums and the soaring profits of the giant insurance cartel.”

The conflict in Afghanistan was the top story in one media sector last week, network news, at 27% of the airtime studied. One key element of the story was President Obama’s continuing deliberations over war strategy. On October 28, the New York Times reported that he might be leaning toward a middle approach, “aimed at protecting about 10 top population centers…that would stop short of an all-out assault on the Taliban while still seeking to nurture long-term stability…In effect, the approach blends ideas advanced by General McChrystal and by Vice President Joseph R. Biden Jr., seen as opposite poles in the internal debate.”

But a significant amount of the coverage also focused on the increasingly deadly combat and violence inside Afghanistan, including two helicopter crashes that killed 14 Americans in what the AP called “one of the deadliest days for U.S. troops in the war in Afghanistan.”

An October 29 story on NBC’s Today show blended elements of both the strategic and combat components of the war, reporting on Obama’s trip to the Dover Air Force base as the bodies of 18 Americans killed in Afghanistan were returned there.

“All of this comes as the President decides whether to send more troops to Afghanistan,” noted correspondent Chuck Todd. “We’re told he’s going to make a decision in the next couple of weeks.”

The economic crisis was the top story in one sector last week, newspapers, where it filled 15% of the front page coverage studied. Although the narrative was divided into a number of themes, the top storyline involved the troubled financial sector. The biggest news there was new legislation, endorsed by the administration, to cope with failures in the banking sector.

An October 26 New York Times story reported “that the measure would make it easier for the government to seize control of troubled financial institutions,  throw out management, wipe out the shareholders and change the terms of existing loans held by the institution.” The plan “as outlined so far would already make it much more costly to be a large financial company whose failure would put the financial system and the economy at risk. It would force such institutions to hold more money in reserve and make it harder for them to borrow too heavily against their assets.”

Not surprisingly, that new regulatory drive stirred up a robust response. 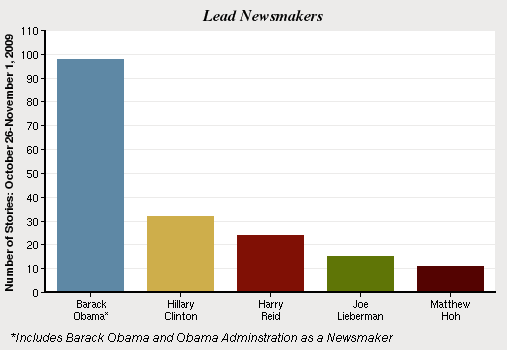 “As Congress starts debating how to deal with financial firms deemed ‘too big too fail,’ some lawmakers and advocates are worried about giving the executive branch expansive new powers over the financial sector,” declared a piece posted on CNN.com

Secretary of State Hillary Clinton, who visited violence-torn Pakistan last week, was the No. 2 newsmaker (at 2%). Senate Majority Leader Harry Reid, perhaps the key legislative player in the health care fight, was the next biggest newsmaker (also at 2%). Independent Senator Joseph Lieberman, who caucuses with Democrats but often does not hew to the party line, made news last week (1%) by opposing the “public option” in health care legislation and stating his intention to campaign for some Republicans in the 2010 election cycle.

And the week’s fifth leading newsmaker (1%) was directly related to the debate over Afghanistan strategy. Matthew Hoh, a former Marine Corps Captain and foreign officer in Afghanistan, generated headlines when he tendered his resignation to protest the continuing U.S. combat mission in that country.