An issue that has repeatedly provoked public passion and media scrutiny—big bonuses at bailed-out banking institutions—helped drive coverage of the economic crisis last week to its highest level in more than two months.

With anger over Wall Street compensation simmering and the Obama Administration slashing the pay of some executives, the economy accounted for 15% of the newshole from October 19-25, according to the Pew Research Center’s Project for Excellence in Journalism. That made the economy the week’s No. 1 story and represents the most attention to the subject since August 3-9, when a government report showed a small dip in the unemployment rate.

The issue of pay at firms that received federal bailout money has proved a major newsmaker before. The week of March 16-22, reports that bailed-out insurance giant AIG was handing out more than $150 million in bonuses triggered public outrage and helped drive economic coverage to its highest level this year—53% of the newshole.

Last week also provided further evidence of Afghanistan’s recent emergence as a major ongoing news story. Reports that President Hamid Karzai had agreed to a runoff election made the conflict there the No. 2 story from October 19-25. The subject filled 13% of the newshole—nearly doubling the previous week’s coverage of 7%.

The week’s third-biggest story (10%) was health care reform, with part of the narrative focused on the possibility that the “public option,” one of the more contentious elements of the legislative battle, was making a political comeback. Interestingly, there was a substantial drop in health care coverage last week.

The No. 4 story (at 5%) was the growing swine outbreak in the U.S. and the scramble for scarce vaccine.

And a media outlet itself was a central player in the fifth-biggest story last week. The intensifying confrontation between the White House and the Fox News Channel accounted for 5% of the newshole.

In an interview with NBC, Obama compared the news channel, which features a conservative lineup of evening hosts, to a “talk radio format.” For his part, Fox News executive Michael Clemente accused the administration of waging a “vengeful war against a news organization.”

Last week, the economy was the No. 1 story (15%), up modestly from 12% the previous week. Although that still pales in comparison with the level of attention back in February and March—when the economic crisis was routinely filling about 40% of the newshole—it does mark a comeback for a subject that has largely been eclipsed in recent months by the debate over health care reform.

Last week, the primary economic storyline focused on bonuses earmarked for employees of the financial institutions that helped trigger the economic meltdown and required major government bailouts. Anger was a prominent theme, and seemingly a key ingredient in helping to make the story bigger. 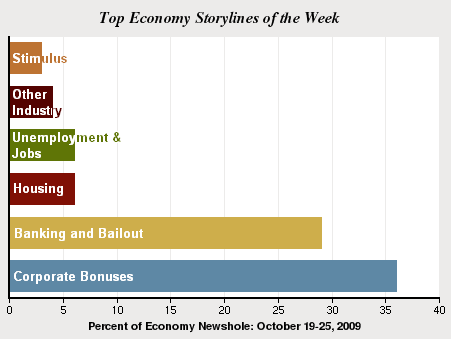 Reporting from the White House on the October 19, Today show, correspondent Savannah Guthrie said, that “aides here use words like outrageous and offensive to describe the bonuses, but the question is ‘what can they do about it?’” The story estimated that firms such as Goldman Sachs, Citigroup and Bank of America had each set aside somewhere between $20 and $30 billion for bonuses and it cited administration charges that despite big profits now rolling in, some financial institutions were still reluctant to make loans.

“For the titans of Wall Street, it’s like the recession never happened,” declared correspondent Chip Reid on the October 20 CBS Evening News. “Less than a year after the big banks helped cause the financial meltdown, they’re on track to pay out a record $140 billion in bonuses this year.” The story also reported that last year, top executives at 29 major banks averaged nearly $400,000 in perks, including such benefits as expensive country club memberships and flights on private jets.

A short time later, the government made news on the compensation front.

“Responding to the furor over executive pay  at companies bailed out with  taxpayer money, the Obama administration will order the firms that received the most aid to slash compensation to their highest-paid employees, an official involved in the decision said on Wednesday,” the New York Times reported on October 22. “The plan, for the 25 top earners at seven companies that received exceptional help, will on average cut total compensation this year by about 50 percent. The companies are Citigroup, Bank of America, American International Group, General Motors, Chrysler and the financing arms of the two automakers.”

The story also described the limits of the administration’s jurisdiction, reporting that the cuts would “have no direct impact on firms that did not receive government bailouts or that have already repaid loans they received from Washington. Therefore, it is unclear how much effect, if any, the plan will have on the broader issues relating to executive compensation, income inequality and the populist animosity toward Wall Street and corporate America.”

Despite word of a private meeting in September between top Obama advisor David Axelrod and Fox News head Roger Ailes—perhaps designed to achieve some form of détente—the tension between the White House and the cable channel has been growing for weeks.

It ratcheted up earlier this month when White House communications director Anita Dunn, speaking to CNN, described Fox as functioning “almost as either the research arm or the communications arm of the Republican Party.” During an October 18 appearance on ABC’s This Week, Axelrod added fuel, contending that Fox is “really not news. It’s pushing a point of view.” Axelrod also seemed to go further, trying to isolate Fox from influencing other media. “And the bigger thing is that other news organizations like yours ought not to treat them that way, and we’re not going to treat them that way. We’re going to appear on their shows. We’re going to participate but understanding that they represent a point of view."

Last week, with both sides apparently digging in for a long battle, the story generated substantial coverage and perhaps even more commentary. It accounted for 5% of the overall newshole, but was an even hotter topic on cable news and radio (12% of the airtime studied in both sectors) as the hosts on Fox and conservative radio talkers in particular joined the fray.

On his October 20 Fox News show, Bill O’Reilly attributed the White House stance toward Fox to the cable channel’s coverage of Obama’s associations with “far-left individuals…The Obama people hated the Rev. Wright situation, the Bill Ayers story, the Van Jones deal and now the latest, Fox News breaking a story about White House communications director Anita Dunn praising the brutal Chinese dictator, Chairman Mao…The continuing reporting on radical elements within the Obama administration has clearly rankled the president and his advisers. That is what the attacks on Fox News are all about.”

And the sight of a Democratic White House locking horns with a conservative-leaning cable outlet proved to be irresistible fodder for much of the rest of the media.

An October 26 Los Angeles Times story, summing up the battle, noted that, “The salvos by administration officials have rallied liberals who complain that the channel has a conservative agenda. The activist group MoveOn instantly jumped in the fray, urging Democrats to stay off Fox News programs. But the White House’s stance also gave extra lift to the network at a time when it is on track to record its best ratings year ever…If anything, the Obama administration has succeeded in reinforcing Fox News’ identity as a thorn in the side of the establishment—a role the network loves to play.”

Last week, the conflict in Afghanistan, at 13% of the newshole, generated its second-highest level of coverage since PEJ began the News Coverage Index in January 2007 (only ranking behind 20% the week of Oct. 5-11). It also was the top story in newspapers and online, registering at 17% of the newshole in both sectors. But the narrative shifted somewhat.

While most of the coverage in recent weeks has focused on the debate within the Obama administration over strategy for Afghanistan, the dominant storyline last week was about Afghan politics—with the big news being President Hamid Karzai’s decision, however reluctantly, to accept a runoff election. A New York Times report on that decision stated that, “Mr. Karzai’s capitulation came after an all-out push by Obama administration officials and their European allies. But even though Mr. Karzai ended his strong resistance to a runoff, that will not completely resolve the country’s political crisis, officials say.”

Media attention to the health care debate (10%) decreased significantly from the previous week (21%) when the Senate Finance Committee approved a health care bill by a 14-9 vote. Last week’s narrative was driven, at least in part, by the news that the so-called public option could be enjoying something of a revival. Early in the week, a new ABC-Washington Post poll found that 57% of the respondents now favored the idea of a government run health care alternative to private insurers while only 40% were opposed.

And with swine flu spreading and vaccine production lagging, the H1N1 outbreak was the No. 4 story, at 5% of the newshole last week. Scenes of long lines of people waiting for shots at clinics around the country were ubiquitous in the coverage last week. And the story was biggest on network news (11%), which traditionally devotes considerable time and energy to covering medical-related issues.

For the week of October 19-25, Barack Obama was once again the dominant headline generator, registering as a lead newsmaker in 9% of the week’s stories. (To be “lead newsmaker” in our accounting, a figure must appear in at least 50% of the story). The second-biggest newsmaker was Obama’s counterpart in Afghanistan, Hamid Karzai (3% of the stories.) 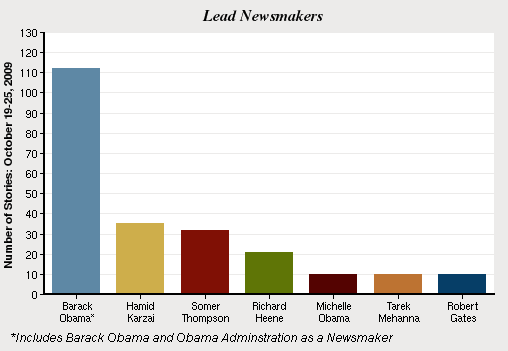 The No. 3 newsmaker (at 2%) was Somer Thompson, the seven-year-old Florida girl who went missing after school and was later found murdered, triggering an extensive police investigation. The fourth-biggest newsmaker (also 2%) was Richard Heene, the father of now famous “balloon boy” Falcon Heene. Last week, the media reported that the boy’s mother, Mayumi Heene, acknowledged to authorities that the entire balloon flight episode, which captivated the nation on October 15, was a hoax—something law enforcement officials had already been contending.