For the second week in a row, there was a distinctly international flavor to the news. Last week, it came as the Obama administration confronted two major foreign policy challenges and lobbied, unsuccessfully, for the world’s athletes to come to Chicago in 2016.

Three of the top five stories in last week’s news agenda were based overseas and accounted for almost one-quarter of the overall coverage. Two involved major U.S. domestic policy issues and filled about one-fifth of the newshole.

The No. 2 story was the situation regarding Iran, which filled 11% of the newshole from September 28-October 4, according to the Pew Research Center’s Project for Excellence in Journalism. The week began with news of new missile tests by Tehran and ended with negotiations—at a very uncertain stage—that may represent the last serious effort at resolving concerns about Iran’s nuclear program through diplomacy.

The fifth-biggest story (at 6% of the coverage) featured another major geopolitical decision facing the White House. Last week, in the wake of General Stanley McChrystal’s much-publicized recommendation that the U.S. needed to bolster its forces in Afghanistan, Obama intensified consultations with advisors over strategy in the eight-year-old conflict. 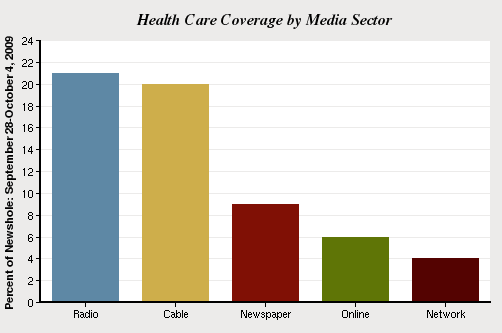 And the fourth-biggest story (7%), the decision about where to site the 2016 Olympics, featured its share of international intrigue and diplomacy. But it was at least, in part, also a U.S. politics story as Obama’s aggressive lobbying for him home town of Chicago—which was passed over for Rio de Janeiro—became something of a partisan issue.

Meanwhile, the No. 1 and No. 3 stories last week were the two top domestic issues of 2009, but at levels far below peak coverage. The biggest, at 11%, was the health care debate, which has hit something of a lull in media attention as proposals wend their way through the legislative sausage factory. And the No. 3 story was the economic crisis, which filled 9% of the newshole last week.

While the economy still routinely finishes among the top five weekly stories, the subject is now generating a fraction of the coverage it did in during the first two months of the new Obama administration, when the financial crisis crowded almost every other event in the news landscape.

The second-biggest story overall from September 28-October 4, was news from Iran, which led the online sector, where it accounted for 13% of the newshole studied. The topic was also the No. 2 story in newspapers and on cable and broadcast network news.

Despite widespread concern about Iran’s nuclear program and the strategic challenge it poses, coverage of that nation in the U.S. media has come in spikes often followed by lengthy lulls. Iran’s taking of British military hostages in March 2007, for example, led the News Coverage Index for two consecutive weeks. And the widespread protests that erupted after this year’s June 12 elections made Iran the top story (28% of the newshole) the week of June 15-21 and again, at 19%, the week of June 22-28.

The most recent jump in Iran coverage was triggered by the surprise September 25 announcement from the leaders by the U.S. Britain and France of a secret nuclear site in Iran. Against that backdrop, last week’s big news was the negotiating session in Geneva designed to achieve a diplomatic breakthrough on the nuclear issue before more dramatic steps—such as tougher sanctions or even a military confrontation—become more likely options.

While the week ended with some tentative signs of progress at the talks, the dominant media narrative stressed the challenges and obstacles to successful negotiations.

Thus, while an October 2 Los Angeles Times story noted that Iran had “agreed to admit international inspectors within weeks to a uranium enrichment plant near the holy city of Qom,” it added that, “U.S. officials and allied officials remained cautious, describing the outcome as positive but the progress as fragile, and expressing concern that Iran may not make good on its promises.”

The same cautious tone was struck on CNN’s Situation Room, when foreign affairs correspondent Jill Dougherty told anchor Wolf Blitzer that despite the initial encouraging news, when it comes to striking a deal with Iran, “you never know… It’s a long path here.”

But Iran was not the only foreign policy issue in which uncertainty reigned last week. Coverage of the war in Afghanistan (at 6%) dropped by a third from the previous week when the Washington Post’s publication of General McChrystal’s leaked assessment of the war effort helped the subject fill 9% of the newshole.

In a commentary for CNN.com, analyst Gloria Borger laid out the conflicting advice the President is hearing as part of his review of Afghanistan policy. "The vice president, whom he sent to Afghanistan…is pushing for a complete strategic shift: from nation-building in Afghanistan to focusing more on special forces in the region to fight al Qaeda.” Borger asserted. “And his new military chief on the scene, Gen. Stanley McChrystal, is advocating something completely different: a force increase of up to 40,000 troops. Another surge.”

The decision on where to hold the 2016 Olympics was the top story last week in network news, accounting for 14% of the airtime studied. And on a further sign of how virtually every issue seems capable of sparking some kind of political firestorm, Obama’s decision to lobby the International Olympic Committee directly to bring the games to Chicago provided grist for the partisan Washington mill last week. (The Windy City was eliminated early in the voting).

A story posted on the Washington Post web site recounted this exchange on the subject between the Republican and Democratic National Committees.

“’I just don’t think it’s necessary,’ said Republican National Committee chairman Michael Steele in a conference call with reporters on Tuesday morning. ‘I don’t know the judgment behind the president going. I just think it’s not a necessary trip right now when we are facing some pretty looming issues.’”

According to the story, that brought a response from a DNC spokesman that, “It’s just sad that Michael Steele and the Republican Party would talk down our country’s Olympic bid, purely for partisan politics. It just goes to prove what we’ve been saying all along—Republicans are dead set on saying ‘no’ to anything the president supports, even bringing the Olympic Games back to the United States.”

But as the week ended, the Olympic bid turned into a defeat for Obama, one he might not welcome at a time when his popularity is dipping and he is using his political capital to fight to change the health care system.

A piece posted on the Chicago Tribune web site declared that the Olympic rebuff “was a worst-case scenario for the president, who was already facing criticism for getting involved in the effort even before the decision was made.”

Health Care and the Economy

Back at home, in the meantime, the battle over health care reform filled 11% of the newshole last week, up slightly from 9% the previous week. And it was the No. 1 story in the two media sectors that include the ideological talk shows, cable (20% of the airtime studied) and radio (21%). But for now, the health care debate is no longer dominating the news agenda as it did in late summer. One reason is that the angry town hall meetings and much of the overheated political rhetoric has cooled as the grinding legislative process has, for now, become the focus of the story.

That doesn’t mean, however, the hot buttons aren’t still being pushed. Last week, as this Associated Press story reported, the battle over abortion became part of the health care fight. “In a vote with far-reaching political implications, senators writing a health care overhaul Wednesday rejected a bid to strengthen anti-abortion provisions in the legislation…The 13-10 vote by the Senate Finance Committee could threaten support for the health care bill from some Catholics who otherwise back its broad goal of expanding coverage. But women’s groups are likely to see the committee’s action as a reasonable compromise on a divisive issue that is always fraught with difficulties,” the story stated.

And one incendiary line got the media’s attention last week when Democratic Congressman from Florida Alan Grayson fanned a controversy with his statement that the Republican approach to health care is for the sick to “die quickly.”

At 9% of the overall newshole, the economic crisis generates slightly more coverage than the previous week (8%). One key newsmaker was Bank of America boss Ken Lewis, who announced he was stepping down.

In a story that captured the dramatic reversal of fortune for many atop the financial industry, the Wall Street Journal reported on October 1 that a source close to Lewis said he “was fed up with the criticism that haunted him following the takeover o Merrill Lynch & Co.…Lewis was initially hailed as a hero for swooping in to buy Merrill on the same weekend last September when Lehman Bros. Holdings Inc. collapsed. He soon may face civil securities charges from New York Attorney General Andrew Cuomo over disclosures of Merrill’s bonus payments and ballooning losses shortly before the takeover was completed in January.”

As is usually the case, Barack Obama was the dominant figure in the news from September 28-October 4, registering as a lead newsmaker in 9% of the stories, down from the previous week’s mark of 14%. 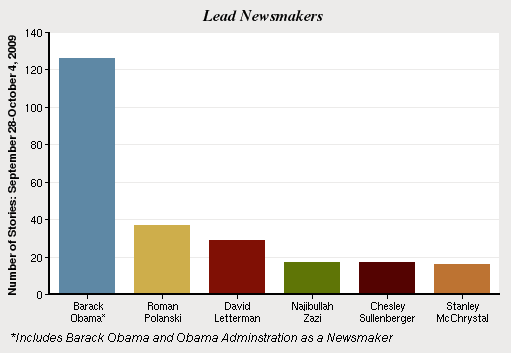 Two show business figures dealing with scandals of different magnitudes were the week’s next biggest newsmakers. Filmmaker Roman Polanski, who was arrested in Switzerland in connection with a three decades old case involving sex with a minor, registered in 3% of the stories. Expressions of support for Polanski from some entertainment heavyweights seemed to generate something of a backlash against him in much of the media narrative.

And in response to a bizarre extortion plot, late night talk host David Letterman (2% of the stories) admitted he had engaged in sex with some female staffers. Much of the attendant coverage speculated on whether the revelations would damage Letterman’s career. That number might have been higher had the event not occurred late in the week, as the media momentum slows over the weekend (and PEJ does not include weekend news programming or Saturday papers in its sample).

The next biggest newsmakers (tied at 1%) were pilot Chesley Sullenberger, who returned to retrace the route he was planning on taking when he safely and miraculously landed a crippled plane on the Hudson River last January, and Najibullah Zazi, the man suspected of plotting a terror attack in the U.S.

The No. 6 newsmaker, also at 1%, was top commander in Afghanistan, General Stanley McChrystal, whose advocacy for more troops in Afghanistan has helped shape public debate on the issue.