Kennedy’s death on August 25—the passing of a Senator of nearly five decades, perhaps the nation’s most booming liberal voice and the last surviving brother in the Camelot political dynasty—accounted for 27% of the newshole from August 24-30, according to the Pew Research Center’s Project for  Excellence in Journalism.

Kennedy’s death indeed generated more coverage than that of any other political or celebrity figure since PEJ began the News Coverage Index in January 2007. The next closest was pop star Michael Jackson, whose June 25 death accounted for 18% of that week’s coverage.

The Kennedy saga was primarily a television event, attracting the most coverage on cable (34%) and network news (35%). And there were numerous storylines for the media to pursue. Along with the tributes, obituaries and the memorial service and burial, the coverage examined his place in the Kennedy family firmament, his legislative achievements and some of his well-known personal problems and failings. In addition, as a senator who made health care reform his primary goal, the press speculated on the impact of his dea

th on the legislative battle in Washington.

If one combines last week’s Kennedy coverage with stories that also tried to assess the impact of his death on the health care debate, indeed, the various Kennedy narratives filled almost one-third—30%—of the newshole.

As a separate subject, health care reform—even with the Kennedy aspect attached to it—plunged last week, after having been the No. 1 story for five consecutive weeks. It registered as the No. 2 story from August 24-30, filling 11% of the newshole—down from 28% the previous week.

Media attention to the escalating conflict in Afghanistan, meanwhile, also fell dramatically, accounting for only 3% of the newshole just one week after generating its highest level of coverage ever (10%) in the NCI.

The death of the long-serving Massachusetts Senator registered as the top story in every media sector except radio.

Some of the coverage dealt with the events and tributes that followed the senator’s passing. And though it was by no means a dominant storyline, some ideological sniping over his politics and legacy was part of the narrative. More of the commentary and coverage was aimed at piecing together the complex personal and political legacy of a man who lived most of his life in the public spotlight and was a polarizing figure for many.

Certainly, the darker moments of his life were not ignored either.

“He was a married senator with three children and personal demons,” noted Diane Sawyer on the August 26 edition of ABC’s “Good Morning America.”  “Narrowly surviving a plane crash, the scandal of Chappaquiddick [and] he lost the race for the presidency in 1980 and said he would not run again.”

A good deal of the coverage focused on Kennedy’s place in an American political dynasty that included two assassinations and three bids for the White House.

A piece posted on the ABC News web site on August 27 described the burdens he bore after the 1963 killing of President John Kennedy and the 1968 shooting death of his brother Robert as after winning the California primary for the Democratic presidential nomination. The story quoted Kennedy biographer Adam Clymer saying “He seriously contemplated getting out of politics after Robert’s death….He might be too obviously the next target and all of that. But he decided to stick it out and as he said on more than one occasion, pick up a fallen standard.” 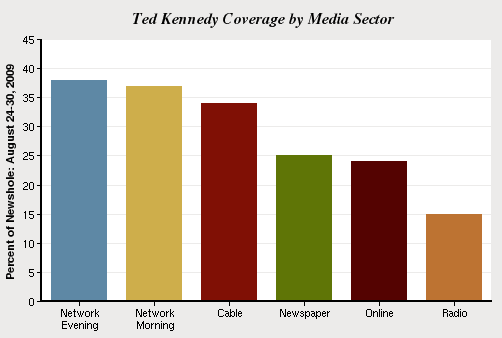 “Kennedy was seen by many as his brothers’ heir, and perhaps he could have won the White House had he stepped into the presidential race then,” the piece continued. “But he didn’t. And the very next year there occurred a tragedy [Chappaquiddick] that would forever block Ted Kennedy’s presidential ambitions.”

When the narrative veered away from the personal and toward Kennedy’s career in the Senate, the emphasis was frequently on his preeminent role in Democratic politics and policy.

“Sen. Edward M. Kennedy’s death leaves a void in the firmament of American politics, one that will be difficult to fill—not only because the Democratic Party has no understudy ready for his role, but also because Congress has changed so much in the more than four decades of his career,” read a story in the August 27 Los Angeles Times. “There is no Democrat—not even President Obama—who commands so much automatic respect on the party’s left.”

Appearing on cable channel MSNBC, NBC anchor Brian Williams declared that, “There isn’t a major piece of social legislation over the past four decades that wasn’t touched by Ted Kennedy.”

Fittingly enough, no Kennedy story would be complete without some political intrigue and controversy. Last week’s coverage also included a proposal Kennedy made shortly before his death that Massachusetts change its laws to enable the governor to quickly appoint an interim senator rather than hold a special election.

“Allowing Governor Deval Patrick, a Democrat, to appoint an interim successor to Kennedy would preserve the party’s 60 votes in the Senate, the minimum needed to end debate and force action on legislation. The health-care bill is a top priority for President Barack Obama,” reported a Bloomberg News story. “Republicans, outnumbered by Democrats in the Massachusetts House 144 to 16 and 35 to 5 in the Senate, criticized Democratic leaders for attempting to move that quickly and charged they were being hypocritical.”

At 11% of the newshole, the raging battle over health care generated its lowest level of attention since the week of July 13-19, (also 11%) when it was overshadowed by the Sonia Sotomayor Supreme Court confirmation hearings. Last week, it was the top story in only the radio sector, where it accounted for 31% of the airtime studied and was largely fodder for the ideological radio talk show hosts.

In many ways, the health care narrative hit the pause button last week. The angry town hall showdowns that had driven coverage for several weeks were no longer fascinating the media, and accounted for less than 10% of health care coverage last week. And while the storyline from Aug. 17-23 focused largely on Obama’s political problems in selling health care legislation, that theme too had receded last week. With the legislative battle expected to once again take center stage in September, last week’s drop in coverage may likely prove temporary.

The economic crisis was the No. 3 story from August 24-30, accounting for 11% of the newshole, up slightly from the previous week (10%). The top storylines included Obama’s decision to reappoint Federal Reserve Chairman Ben Bernanke and news that the administration had upped its projection of the 10-year budget deficit by $2 trillion.

The fourth-biggest story last week, at 9%, was the U.S. campaign against terrorism and the big news was Attorney General Eric Holder’s move to appoint a prosecutor to examine the legality of techniques used to interrogate terrorism suspects. That story generated the most attention (14%) on cable news, with many of the prime time talk shows weighing in.

And the No. 5 story (5%) was the bizarre and frightening saga (albeit one with an ostensibly happy ending) of Jaycee Dugard, who turned up safe last week, 18 years after she had been kidnapped as a young girl. The alleged perpetrator and his wife, Phillip and Nancy Garrido, are now facing a battery of felony charges including rape and kidnapping. 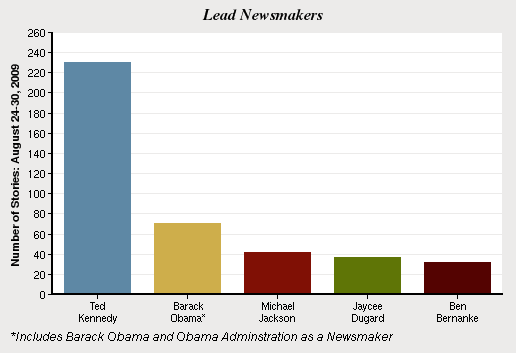 As a lead newsmaker in 18% of the stories from August 24-30, Ted Kennedy easily surpassed everyone else in the headlines, including Barack Obama. (A lead newsmaker is someone featured in at least 50% of a story). The Massachusetts Senator became only the third person—along with Michael Jackson and Sonia Sotomayor—to generate more weekly attention than the President since the inauguration. And at 18%, Kennedy topped the highest levels of weekly coverage generated by either Jackson (15%) or Sotomayor (14%).

Obama was the No. 2 newsmaker, but registered in only 6% of the stories compared with 10% the previous week.

Jackson, the late pop star, was next at 3% as the coroner ruled his death two months earlier was a homicide caused by an overdose of the anesthetic Propofol and other drugs. Jaycee Dugard, the young kidnapped girl who, amazingly, resurfaced last week as a woman of almost 30, was next at 3%. And Fed chairman Ben Bernanke, tapped by Obama to continue in that job, was the fifth-biggest newsmaker of the week, also at 3%.

Hiding in Plain Sight, From Kennedy to Brown

A Disaster and an Election Drive the News