Last week, Barack Obama tried his hand at media criticism. At a town hall meeting in Montana, the President accused TV news of focusing on town hall meetings when “tempers flare” because television “loves a ruckus.” Whether that critique was accurate or not, there were enough flaring tempers and raucous ruckuses last week to generate the biggest single week of health care coverage so far this year. And that coverage was virtually non-stop on conflict-driven cable news, which became ground zero for town hall confrontations across the country.

From August 10-16, the debate over health care reform dominated the news agenda, accounting for 32% of the newshole, according to the Pew Research Center’s Project for Excellence in Journalism. That doubled the amount of coverage the subject received the previous week, according to PEJ’s weekly News Coverage Index, and easily tops what had been the highest level of weekly coverage this year, (25% the week of July 20-26). While the topic was the No. 1 story in three of the five media sectors, it was clearly driven by massive coverage on cable (62%) and radio (44%).

News consumers watched as Senators such as Pennsylvania’s Arlen Specter and Maryland’s Ben Cardin faced hostile, shouting town hall crowds. The term “death panels” entered the media vernacular and William Kostric, a man walking outside Obama’s New Hampshire town hall meeting with a gun strapped to his thigh, got his 15 minutes of fame. Death threats, swastikas, and comparisons with Hitler’s regime in Nazi Germany became part of the media narrative. Helping inflame passions, the ideological talkers on cable and radio spent the week lobbing rhetorical grenades at their foes.

Following the health care debate, coverage of the economy (12%) was a distant second. The escalating conflict in Afghanistan was No. 3, at 6%. The fallout from the Hudson River air accident was next at 4%, followed by the death of Eunice Kennedy Shriver (2%), founder of the Special Olympics and younger sister of John F. Kennedy.

Last week, however, nothing came close to matching the intensity of coverage of the health care fracas. The tone might best have been captured by the New York Post headline, “Health Care Goes Postal.” The column in the paper, owned by Rupert Murdoch, cited the frustrating inefficiencies at the writer’s local Post Office as a reason to keep government out of health care. But the headline, a double entendre, also invoked a common term for the seething anger that became a defining aspect of last week’s news.

Last week’s coverage of the proposed health care legislation was overwhelmingly focused on the two p’s—politics and protests. Those two storylines accounted for about three-quarters of the overall coverage of the subject. That is similar to the pattern from the previous week (August 3-9), when much of the discussion focused on whether the town hall protestors represented genuine grassroots sentiment or were part of an orchestrated campaign by special interests. Last week, that aspect of the debate seemed to recede as the sound and fury of the confrontations themselves took center stage.

An August 12 piece posted on the AOL News site asserted that guns, a swastika painted on a Congressman’s office sign and posters depicting Obama as the Joker of Batman fame were part of the “toxic mix” now surrounding the issue. Describing the outburst of anger at Specter’s town hall meeting, the story said it was “a scene being played out at gatherings across the country, as Americans who are worried and angry about President Barack Obama’s proposals vent while cameras roll.”

Much of the coverage was driven by the talk show culture that permeates cable news and radio today. Within those two media sectors, the 13 cable and radio talk shows studied by PEJ had an even more intense focus. Fully three quarters (75%) of the airtime studied in this talk universe was devoted to the health care issue last week. As the News Coverage Index has shown, talk shows tend to amplify the most polarizing political issues and last week, coverage of the hot-button topic seemed to literally boil over.

On prime time cable, the talk hosts did some venting of their own. On his Fox News Channel program, conservative Bill O’Reilly used the issue as a way of criticizing the cable network’s rivals.

“Fox News explodes while the liberal media burns,” O’Reilly declared on August 10 while discussing new cable ratings numbers. “The main reason is the health care debate. While the other network news broadcasts downplay the dissent and promote the government takeover of the health care industry, Fox News highlights the intense debate. When we cover the town hall meetings, we don’t describe the protestors as loons.” 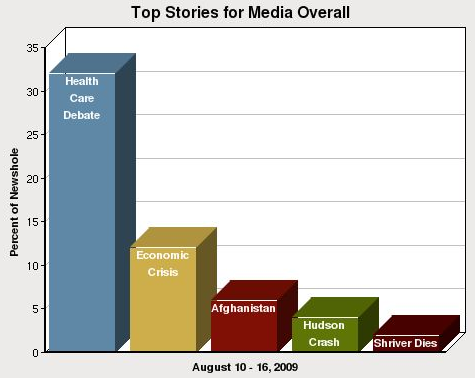 O’Reilly’s primary antagonist on MSNBC, liberal Keith Olbermann, put racism at the heart of the issue on his August 11 show. Citing, among other things, the swastika painted on a sign outside the office of African-American Congressman David Scott, Olbermann declared that “racism…may not be the only motive [for the health care protests], it may not be the predominant one. But it does exist, it can’t be ignored. And it’s an undercurrent that connects the irrational ‘birthers’ to the equally irrational ‘deathers,’” the people who believe legislation would establish so-called death panels to make crucial health care decisions.

In the world of talk radio, the rhetoric might have been even more heated. Liberal talk host Ed Schultz (who also holds forth on MSNBC) trained his guns on Dick Morris, the political consultant and Fox commentator who had talked about the need for Democratic legislators to be “terrorized” by an outpouring of populist anger on health care.

“Did he say the word ‘terrorized?’” Schultz asked. “Dick loser, hooker-hittin’ Morris has used the word terrorized…Sooner or later, the psychos have to be reeled in.” (The ad hominem “hooker-hittin’ attack was a reference to a reported dalliance with a prostitute that led to Morris resigning from Bill Clinton’s 1996 re-election campaign.)

Across the dial, conservative Rush Limbaugh made an historical argument on his August 10 show that ratcheted up the rhetorical temperature. “Let’s leave aside the fact that the term Nazi comes from the German word for ‘national socialism.’  That’s where the word Nazi comes from,” he told listeners. “Now, if you guys in the White House don’t like being compared to the socialism of Adolf Hitler and the Nazis, fine. …  But socialism is socialism….If the question is ‘Who is more like the Nazis?’, and the choices are Obama-Pelosi or people showing up at town hall meetings who want to protect their individual liberty, that’s not even a close call!”

There were some efforts last week to vet the dueling claims on both sides. A report on Campbell Brown’s August 12 CNN  program examining Obama’s suggestion that American Association of Retired People (AARP) was backing legislation included a statement denying any such endorsement from the head of the group and concluded that the President’s “own facts were fuzzy.” Brown, who asserted that “the truth is getting lost amid all the noise,” also turned her attention to one of the more incendiary arguments in the health care debate.

“Once again, and again,” she declared, “there are no government death panels determining whether to pull the plug on grandma.”

As has been the norm in recent weeks, the troubled economy was the second-biggest story of the week, filling its requisite 10%-15% of the newshole. (It was 12% from August 10-16.) Some of the biggest news last week involved a moderately optimistic outlook from the Federal Reserve, which saw the recession as leveling out. With the upcoming elections as a backdrop, coverage of the escalating conflict in Afghanistan spiked to 6% of the newshole—roughly tripling its level from the previous week. While coverage of what is quickly becoming America’s primary military engagement is still generally at a modest level, it has risen in the last few months.

The continued fallout from the August 8 crash over the Hudson River between a helicopter and a small plane that claimed nine lives was the No. 4 story last week, accounting for 4% of the newshole. And the fifth-biggest story from August 10-16 was the death of Eunice Kennedy Shriver (2%). While every obituary mentioned her prominent role in the Special Olympics, much of the coverage addressed her death as another sad milestone in the passing of a Kennedy generation that produced a senator, an attorney general and a president—two of whom were gunned down in the prime of life. 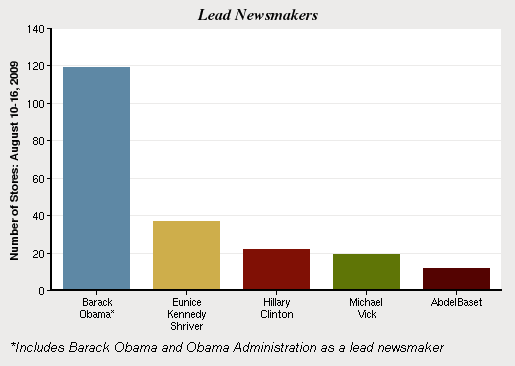 As the key player in the health care debate, Barack Obama, who took to the road last week to hold his own town meetings, was the top headline generator from August 10-16. He was a lead newsmaker in 9% of the week’s stories, up slightly from 7% the previous week. The No. 2 newsmaker was Eunice Kennedy Shriver (3%).  Coming next, at 2%, was Secretary of State Hillary Clinton, who made news for a trip to Africa that included a flash of impatience when a questioner asked her what her husband, the former President, thought about an international issue. (There was some controversy over whether the question had been botched by an interpreter.)

The No. 4 newsmaker was Michael Vick (1%), the NFL quarterback who signed with the Philadelphia Eagles after completing a prison sentence for his role in an illegal dog fighting ring. Following Vick, also at 1%, was Abdelbaset al-Megrahi, the convicted Lockerbie bomber who could be released or transferred due to advanced cancer.