A month into the Obama administration, the economic crisis appears to shifting from Job One to the worsening mega story of 2009. There were different elements in that crisis narrative last week. But the underlying message may be the frightening breadth and depth of the problem.

From February 16-22, coverage of the growing financial turmoil accounted for 40% of the newshole as measured by the Pew Research Center’s Project for Excellence in Journalism—the fourth week in a row it has reached or exceeded 40%. That represents a modest drop from 47% the week of Feb. 9-15. But those numbers don’t tell the whole story.

Last week, it was the variety of grim storylines that seemed as ominous as anything else. With the stimulus package signed into law, that narrative subsided. But as Obama rolled out his mortgage rescue plan, coverage of the housing and foreclosure problems rose up in its place. So did the troubled auto industry, which last week requested billions more in bailout funds. In addition some coverage of the mechanics of the new administration dealt with the economy’s impact on Obama’s relations with Congress.

In a sign of how the big domestic crisis is eclipsing coverage of other challenges facing the country, Obama last week approved a major escalation—17,000 additional troops—of the increasingly worrisome war in Afghanistan. That story accounted for only 3% of last week’s coverage—about the same amount generated by the fallout over the chimp who mauled a Connecticut woman.

The Economic Crisis: From stimulus to housing to Detroit

There was a noticeable shift in the components of the economic crisis story last week. Coverage of the $787 billion stimulus bill—which had accounted for about half the economic narrative in recent weeks—dropped markedly. Instead, the leading narrative was the housing package, estimated by some to ultimately cost about $275 billion, rolled out by the President in Phoenix on February 18.

The next day’s Wall Street Journal offered mixed reviews of the program designed to keep about nine million endangered homeowners from losing their property. “The plan drew praise for its use of incentives,” the Journal reported. “But critics said it didn’t do enough to address the difficulty of altering loans packaged into securities. It also

will be harder for people to refinance their mortgages if they owe much more than the house is worth or the mortgages aren’t owned or guaranteed by Fannie Mae or Freddie Mac. That would leave out many borrowers in hard-hit states such as Florida, California and Arizona.” New York Times conservative columnist David Brooks also offered a qualified defense of the plan, noting that to help struggling homeowners who are victims, it was probably inevitable the plan would help some who had tried to game the system.

But much of that more qualified response seemed to be drowned out by shriller voices. One critic who became an immediate internet sensation was CNBC reporter Rick Santelli who unleashed a now famous “rant” on the floor of the Chicago Board of Trade on February 19. "This is America! How many of you people want to pay for your neighbor’s mortgage that has an extra bathroom and can’t pay their bills?” Santelli shouted, as traders joined in with a chorus of boos. “President Obama, are you listening?" According to media accounts, that outburst turned into the most watched video in the history of CNBC.com, even though some of Santelli’s own CNBC colleagues suggested he didn’t have all his facts straight.

Though the Congressional stimulus fight was over, that aspect of the economic story still generated news last week. On February 17, the day Obama signed the bill in Denver, NBC correspondent Savannah Guthrie talked about a new White House political strategy on the economy after a rough go with Congressional Republicans. “Aides say the President will be traveling more often, perhaps as much as once a week, to sell his economic policies directly to the American people,” she reported on the Today show.

And Republicans seemed to find a way to take their criticisms on the road as well when some GOP officials threatened to reject stimulus funds. “A couple of Republican governors have said they don’t want state aid that’s part of the President’s economic stimulus,” noted a February 19 CBS radio report that quoted South Carolina Governor Mark Sanford expressing concerns about “strings attached” to the stimulus money.

And another sector of the economy on the receiving end of a federal bailout was back in the news last week. Coverage of the auto industry—which last week talked about restructuring but also asked for billions more in aid—accounted for 6% of the newshole, the highest level for that story in two months. The Los Angeles Times played the news as more evidence of a crumbling economy in a February 18 story headlined: “Chrysler, GM rev up the anxiety.” The story went on to note that, “General Motors Corp. and Chrysler said Tuesday that they needed nearly $22 billion more in government loans to avoid financial ruin, further darkening a day of global financial turmoil.”

The prognosis for the troubled automakers was not much better on National Public Radio. A February 18 story on Morning Edition replayed a Saturday Night Live parody in which the big auto executives were depicted as having an unquenchable appetite for federal bailout dollars—$100 billion to be specific. “Okay the exact dates and amounts were off a bit, but the concept holds up,” the narrator declared, alluding to the last week’s request for more money.

This week, with a White House fiscal summit, a major policy speech to Congress and a budget outline all on tap, media attention to the spreading elements of this economic turmoil is not likely to diminish. 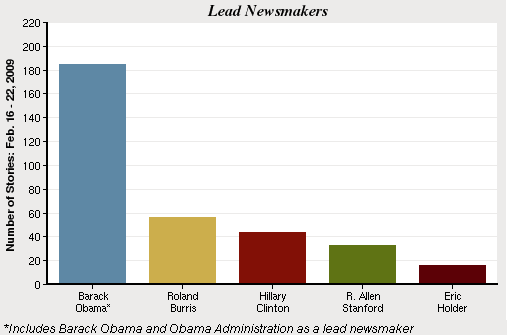 From February 16-22, Obama was once again the top news generator, appearing as a lead newsmaker—meaning at least 50% of a story was about him—in 14% of the week’s stories. That is the same level as the previous week. The more interesting question in any given week is who finished second.

Last week that honor, in a manner of speaking, fell to Roland Burris (4%), whose brief tenure as Illinois’ junior senator was imperiled by the news that he had tried to raise funds for Rod Blagojevich, the ousted Illinois Governor accused of trying to sell the Obama Senate seat. Burris was followed by Hillary Clinton (3%), who made her maiden overseas trip as Secretary of State. After Clinton came R. Allen Stanford (2% of stories), the latest financial wizard to be embroiled in a case of massive investor fraud.

The No. 5 newsmaker, at 1%, was Attorney General Eric Holder, who triggered a robust debate when he gave a speech asserting that the U.S. was “a nation of cowards” when it came to confronting racial issues.

After the economic crisis and auto industry bailout combined to fill nearly half the newshole from Feb. 16-22, the No. 3 story (4% of the newshole) was coverage of the makeup and logistics of the new administration.

The fourth-biggest story last week (at 3%) was the scandal that just won’t go away. The newest wrinkle in Blago-gate was the revelation that Burris had tried to fundraise for Blagojevich before he was appointed to the Senate. Rounding out the top-five list was the war in Afghanistan (also at 3%), a story fueled last week by Obama’s decision to send another 17,000 U.S. service personnel to that country.

For the First Time, Afghanistan Tops the Week’s News