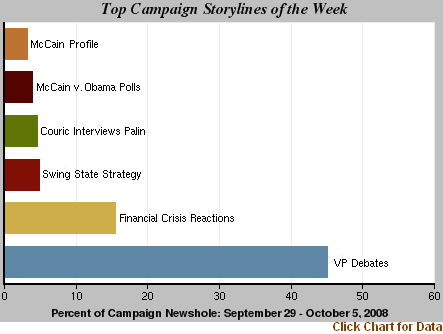 Though the U.S. economic crisis dominated general news coverage—and indeed became one of the biggest stories we’ve ever recorded—it was another event, the Oct. 2 vice-presidential debate, that drove the 2008 campaign narrative.

From Sept. 29-Oct. 5, the financial meltdown and efforts to fashion a bailout package filled 45% of the overall news coverage examined by the Pew Research Center’s Project for Excellence in Journalism. Not only was that significantly more coverage than the campaign—which filled 34% of the newshole. The financial crisis received the most attention from the media for any non-campaign story in a given week other than the Virginia Tech massacre in April 2007.

Yet campaigns for the presidency can take on narratives of their own. And last week, storylines surrounding the Oct. 2 debate between vice presidential contenders Sarah Palin and Joe Biden eclipsed the economy as the No. 1 campaign narrative. The various events connected to the debate accounted for more than half (52%) of last week’s election coverage, according to PEJ’s Campaign Coverage Index. The biggest storyline was the debate itself, at 45% of the newshole. Other related themes included Katie Couric’s much-discussed interview with Palin, (5%), which helped establish the stakes and expectations for the debate. A flap over whether debate moderator Gwen Ifill might harbor a bias toward Barack Obama accounted for another 2%.

At the top of the tickets, Obama and John McCain were virtually tied in the race for exposure last week. The Democrat was a factor in 40% of the stories, just ahead of the 40% for his Republican rival. After consistently trailing Obama in these weekly coverage tallies throughout the general election season, McCain has now run about even with or ahead of his opponent for three straight weeks.

While their running mates grabbed the media spotlight, the candidates’ response to the economic crisis—including their Senate votes for the bailout bill—was still an important element of the campaign. It constituted 15% of last week’s election coverage—less than one-third of the debate coverage. The week’s much more extensive focus on debate-related themes once again reinforces the fluidity and episodic nature of the campaign narrative.

When the economic crisis began to dominate the campaign dynamic three weeks ago, observers wondered whether an issue had finally emerged that would overwhelm all other subjects. What last week illustrated was that another event, such as an eagerly anticipated debate, could supersede even the financial crunch, at least temporarily. And if John McCain’s strategy, as news reports suggest, is to “change the subject,” last week’s example suggests he might have a chance.

Much of the media buzz about the Oct. 2 debate started well before the event itself. In Palin’s case, her shaky responses to some of Couric’s questions on CBS helped spike rampant speculation about her debate performance. Given his famous proclivity for gaffes and verbosity, Biden also triggered plenty of pondering about how he would fare on the podium.

The broad media consensus was the both candidates had done better than expected. And the widely accepted view among pundits was that the debate was not a game changer. The snap media polls taken after the debate, by contrast, showed that the public thought Biden had won. In either case, the result shifted the focus back on the presidential rivals, who are to debate for the second time Oct. 7. 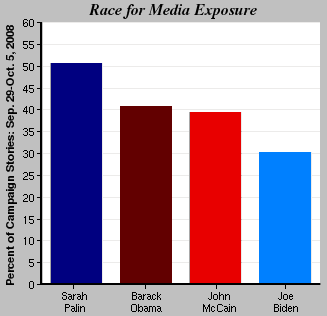 With all these expectations at play, strategy and horserace storylines last week accounted for 11% of the campaign coverage—and much of that tactical coverage was good news for Obama. The top tactical storyline, at 5%, was coverage of swing state strategies, with the big news being McCain’s decision to pull out of Michigan. Another 4% of the campaign newshole was filled by coverage of polls as a number of surveys showed Obama opening up a significant lead over McCain.

For the week of Sept. 29-Oct. 5, the campaign was the No. 2 story—behind the financial crisis (34% of the newshole). That marks the third week in a row that the economic situation generated more attention than the campaign. The campaign was the No. 1 story last week in only one media sector, radio, where it accounted for 45% of the airtime examined. The race for the White House generated slightly more attention, 47%, in cable news. But the economic meltdown accounted for 49% of all the cable time studied, marking the first time all year, the campaign was not the top story in that platform. The intersection of the presidential campaign and the economic crisis emerged early last week when the Obama and McCain camps had to figure out how to respond to the stunning defeat of the bailout bill in the House on Sept. 29 and the resultant 777 point drop on Wall Street.

“White House rivals John McCain and Barack Obama combined television attack ads with statesmanlike appeals to bipartisanship on Tuesday as they vied for political gain in the shadow of the worst economic crisis since the Great Depression,” said an AP story posted on Yahoo! News on Sept. 30. “The intense maneuvering came one day after the House defeated a bipartisan bailout bill and the stock market responded with its largest one-day drop in history.”

Both senators returned to Washington to vote for a bailout package that ultimately was signed into law. And while the two candidates were essentially on the same side of the issue, the week’s political narrative had Obama gaining ground as a result of the public focus on the troubled economy.

During the Oct. 1 edition of Anderson Cooper’s show, CNN electoral map-ologist John King pointed to new polling numbers that showed Obama ahead in such key battleground states as Virginia, Florida and Nevada. “Remarkable new numbers,” said King, noting that the CNN map now had Obama at 250 electoral votes compared with 189 for McCain. “They show, in the midst of this economic crisis, the map is trending toward Barack Obama.” 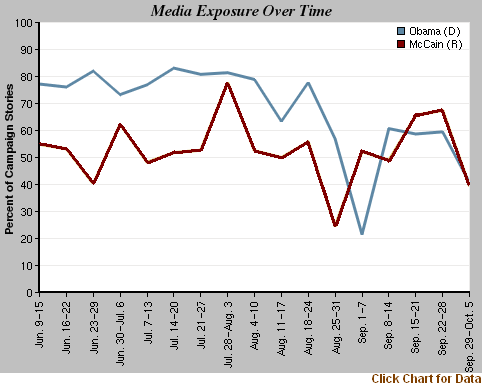 With that strategic narrative as a backdrop, the media spotlight shifted to the Oct. 2 showdown between Biden and Palin, with particular focus on the Alaska Governor.

“All eyes on Palin in VP debate: She needs to undo damage from recent interviews—Biden must keep it simple,” declared the front-page headline in the Oct. 2 San Francisco Chronicle. The story noted that “both Democrats and Republicans have reason to be nervous about the high stakes, performance and potential pitfalls their candidates face” in “the most anticipated vice presidential debate in history.”

The television audience seemed to confirm that when an estimated 73 million viewers made it the second most-watched political debate in U.S. history—behind only the 1980 Carter-Reagan contest. And the post-mortems came fast and furious. There was a fairly divergent range of views, but the congealing media consensus was that the folksy Palin and the more knowledgeable Biden both accomplished their respective missions.

“With winks, smiles and shrugs, Republican vice presidential candidate Sarah Palin tried hard to charm voters in her first and only debate with Democratic opponent Joe Biden,” declared the story posted on MSNBC.com on Oct 3. “Polls indicated she didn’t win — but the absence of gaffes meant she didn’t lose either.”

“During the 90-minute debate from the campus of Washington University, both candidates appeared at least initially to have met the goals set by the campaign at the outset,” read the Oct. 3 account in the Los Angeles Times. “Neither candidate appeared to make a career-altering gaffe.”

The Washington Post’s Oct. 3 analysis made the point that in the absence of a dramatic debate stumble, the campaign would now revert to the more traditional mode with the focus on the men atop the tickets. “The vice presidential debate came with high interest and big expectations and certainly delivered, though not as some had predicted,” the Post story stated. “That leaves it to Obama and McCain to argue it out for the next 32 days.”

Overall, the economic crisis and bailout bill scramble on Capitol Hill was the No. 1 story, accounting for 45% of the newshole from Sept. 29-Oct. 5. It was the No. 1 story in newspapers (47%), online (43%), network news (43%) and cable (49%). In breaking down the coverage of the economic crisis, the top storyline—the political effort to get passage of a bailout bill—accounted for 54% of the space and time devoted to that subject.

After the campaign, which filled 34% of the newshole, there was a steep drop down to the No. 3 story, the discovery of the plane in which millionaire aviator Steve Fossett died (2% of the newshole.) Next, at 1%, came coverage of the U.S. economy not related to the credit market meltdown. The fifth-biggest story of the week involved Pakistan (1%), where the U.S. appears to have stepped up military activities. Last week’s news menu was a reminder that when two major stories vie for attention, there is little room left on newscasts and front pages for coverage of much else.

A Plumber (Sort of) Gets His 15 Minutes