In a year dominated by the war in Iraq and the 2008 presidential campaign coverage, how much media attention did immigration receive? Which aspects of the immigration issue did the media most tune into? What was not covered? And who provided the most coverage?

As comprehensive news coverage of 2007 from the Pew Research Center’s Project for Excellence in Journalism (PEJ) shows, the war and the presidential election consumed nearly a third of the overall newshole. [1] And the debate over US immigration policy was able to secure itself a position within the top 10 stories of the year. It was the fourth biggest story overall for 2007.

Most Covered Topics Across All Media
Source: PEJ, A Year in the News, 2007 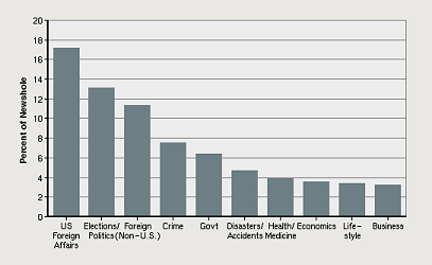 However, a closer look into the data shows that immigration coverage for the year 2007 was not consistent, but episodic. Analysis of a year in the news of immigration comes from PEJ’s in-depth analysis of news coverage of 70,737 stories for the entire year of 48 media outlets across 5 media sectors. Below are some of the key findings specific to immigration:

Throughout 2007, the news agenda was dominated by a few major general topic areas. As stated in the State of the News Media 2008 report by PEJ, “coverage of US foreign policy and US politics and elections accounted for almost one-third of the overall newshole for the year.” Immigration as a topic came in after business coverage at 2.8% of the overall newshole.

A closer look into the immigration coverage timeline across the year and media reveals how as a topic it was not only covered episodically but also in political terms. While coverage was pretty much low but steady throughout the year, the spike to 5.2% for the second quarter of 2007 shows how immigration as a topic received more coverage when it was political.

As illustrated in the table below, the year in the news was dominated by two continuing story lines, the presidential election and the Iraq war, they dominated nearly a third of the overall newshole in PEJ’s analysis of news media. Immigration as a top story was at number four with 2.9 %. Yet this number is a bit misleading.
A month by month look into the trajectory of immigration as a big story revealed that coverage was marked by episodic spikes, rather than being continuous. A jump in May to 5.3% and in June to 8.4% of the overall newshole for all media demonstrated once again that immigration was not covered as a topic but primarily a politicized subject. The breakdown of the immigration big story also illustrates how coverage mostly centered around the discussion of legislation.
Top 10 Stories For All Media
Source: PEJ, A Year in the
News, 2007 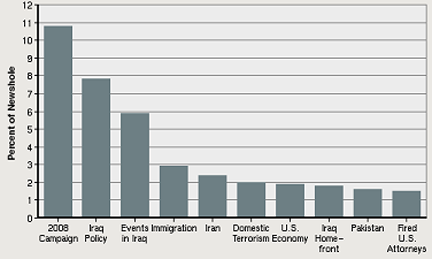 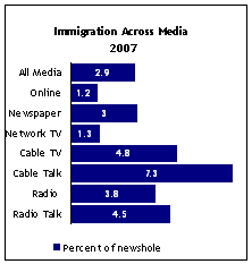 While immigration received modest media attention in the first three months of 2007, it emerged in the second quarter of the year to become the biggest domestic policy issue. The debate over US immigration policy, which included an unsuccessful effort to pass a major immigration reform bill in the Senate, was the fourth biggest story overall in the quarter, filling 5.7% of the total newshole. 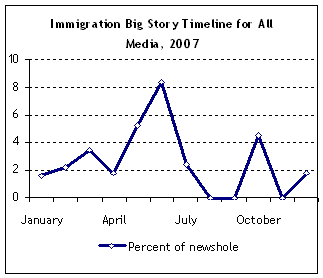 Coverage of immigration during that time increased dramatically in every sector. More specifically, coverage increased sharply between May 17 and June 28 coinciding with the time frame of the birth and death of the Immigration bill. Coverage of immigration across all media was the No.1 topic in the news. With 9.2% of the news space studied for that particular time period, immigration was able to secure first place ahead of the presidential campaign coverage at 8.9%. Let us consider this specific time period in more detail.

FOOTNOTES:
1. Newshole is defined as the time or space available in an outlet for news content.
2. For an explanation of the distinction of immigration as a topic and immigration as a big story please refer to the methodology section of this report.