Time of day is an important element to consider in cable TV news agenda. While during the night—when cable’s talk hosts fill prime time with stories they choose to amplify—during the day the audience is more likely to see stories on crime, accident, disaster, and breaking news events. This was the case in immigration stories, too. While most of the immigration stories on nighttime cable centered around policy and legislation discussion, during the day the audience was more likely to see immigrant crime, rally and protest stories. Live May Day rallies from Chicago, and Los Angeles on CNN Live; ICE raids, illegal border crossing stories on MSNBC Live and FOX Live were some of the typical examples of the day fare. 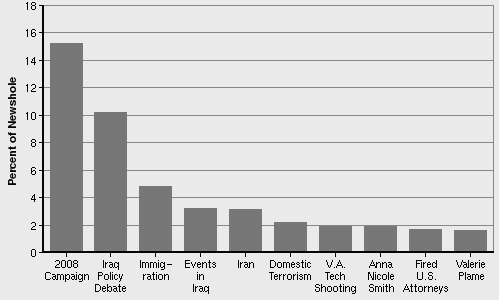 In the year 2007, immigration policy discussion did not make the top 10 stories list for CNN Live. By contrast for CNN evening, it was the biggest third story of the year at 8.5% -in part due to Lou Dobbs’ efforts. For MSNBC the case was different. Immigration was not in the top ten stories for evening programs, but was present in daytime at 3.5% of the newshole as the fourth biggest story overall, right behind the death of Anna Nicole Smith. Immigration was present both on daytime and evening for Fox but in different doses. During daytime it was the overall ninth biggest story of the year with 1.7%; and for the evening it was the third biggest story at 5.0% due in part this time to O’Reilly’s coverage of the issue.

Overall, as also stated in the State of the News Media 2008 report, “MSNBC focused itself around Washington, the campaign, and political scandal, often with an eye sharply critical of the Bush administration. Fox was more oriented to crime, celebrity and the media than its rivals. And CNN tended by degrees to devote somewhat more time across a range of topics.”

The somewhat similar evening newscasts of Fox—Special Report with Brit Hume and Fox Report with Shepard Smith—differ in their rundown of the day’s news. While Smith’s is somewhat more oriented toward a mix of crime, disaster, accidents, with a marked dose of celebrity and entertainment, Hume’s program is focused on politics and government. This was reflected in their coverage of immigration as well. While for Smith, immigration was not a part of the top 10 stories of the year, for Hume it was at No. 5, filling 4.2% of the newshole studied overall. Besides the failed immigration bill coverage, stories on Hume’s nightly news were mostly on state-level immigration legislation news and immigrant crime.

Top 5 Stories in Cable, Channels Combined
Source: PEJ, A Year in the News, 2007 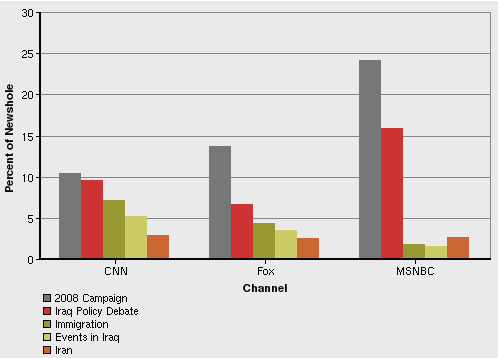 It is also important to note that presidential campaign stories on the topic of immigration primarily received coverage within cable. The GOP debate in which Mitt Romney and Rudy Giuliani clashed; then-NY Governor Eliot Spitzer’s attempt to provide driving licenses to illegal immigrants and the subsequent stance or lack of stance by Hillary Clinton on that issue; and John McCain’s “flip flopping stance” in regards to immigration were some of the topics.

The role of talk radio in immigration policy discussion was largely covered in our section devoted to the Immigration Bill. Here we will briefly consider what radio news headlines had to offer on immigration in 2007. Almost all stations offered some summary of the news. For this we analyzed ABC and CBS headline news every day of the week at 9 AM and 5 PM: four headline segments each day which roughly made 20 minutes of radio headline news.

In general for 2007, radio news headlines from CBS and ABC were in many ways solid supplements to the narrow and selective talk news agenda. In general, they offer an impressively broad if quick look at the day’s events. What is absent is depth, any kind of nuanced analysis or comparison of multiple angles on any given issues.

When it came to immigration in 2007, immigration coverage was confined mostly to May and June, which coincided with the immigration legislation discussion in the Senate. And even then, immigration was only able to secure 0.5% of the newshole of radio headlines.

What was unique about newspapers’ coverage of the immigration was that—much like cable—it devoted somewhat continuous coverage throughout the whole year. Immigration coverage was present, albeit in various degrees, throughout 2007.

National newspapers such as the New York Times, Los Angeles Times and the 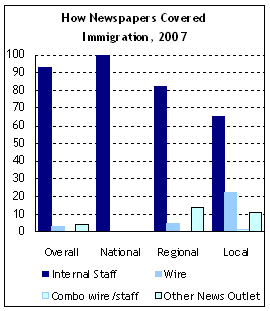 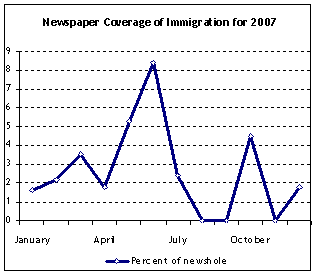 ington Post stood out most in their coverage of immigration. Not only did these newspapers offer detailed coverage of the failed immigration bill, but also offered stories on immigrant life and immigration legislation and discussion in general. All immigration stories in national papers were covered by internal staff.

An important sign of the local nature of immigration was that smaller newspapers devoted their own staff to covering this issue. As we noted in our yearly report, “for major national news stories, local and metropolitan papers tend to rely on the wires, especially the front pages.” But this was not the case in the coverage of immigration in 2007. At the mid-level, 82.3% of coverage on immigration was from staff reporters versus about 51.7% of Iraq stories and 78.9% US economy stories. At the most local level, 65.3% were written by internal staff compared to 47.6% of presidential campaign, 29.3% Iraq, and 53.5 % of US economy. 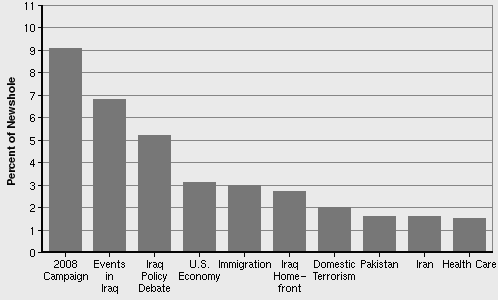 For this section, three network’s weekday nightly newscasts, and the first 30 minutes for the weekday morning shows were considered. This represents about 27,600 minutes of news in 2007.

Top 5 Stories on Network Morning vs. Network Evening
Source: PEJ, A Year in the News, 2007 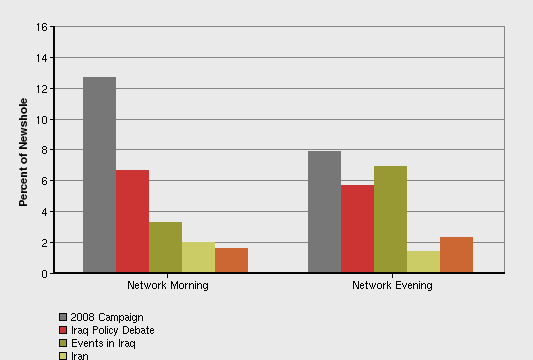 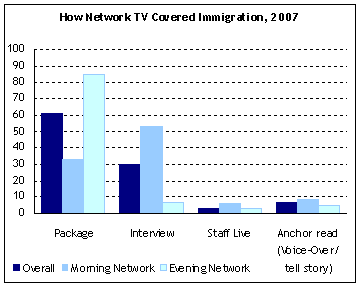 The most striking finding is that, overall in 2007, immigration was not among the top 10 stories for any of the networks except during May and June, which coincides with the immigration legislation discussion in the Senate. In May it was the fourth biggest story (with 4.4% of the newshole), and in June it was the third biggest story (with 5.5%). Both network morning and evening were more concerned with the coverage of the presidential campaign, the war in Iraq and the US economy.

For this section we considered the lead news coverage every weekday on five of the most popular news sites on the Internet: AOL News, CNN.com, Google News, MSNBC.com, and Yahoo.com.

As we also stated in our State of the News Media 2008 report:

Overall, the lead news agenda online was the most international of any media we studied. At least in their top five stories, which is roughly analogous to the number of stories found on a front page of a newspaper and generally describes the number of stories featured at the top of the Web page, the leading Web sites studied put a premium on international news that far outweighed any other medium. Fully 25% of the top coverage dealt with non-U.S. international stories. This was nearly six times that of cable (4%), three times that of commercial network evening news and the network morning news (8%), nearly twice that of newspapers (13%), and about 60% more than radio news programming (15%).

Therefore, it was no surprise to see that some domestic topic areas and specific news got less prominence online. A monthly look at online coverage for immigration found that, it was part of the top 10 list only in May and June, and was absent for the rest of the year. In May it was the sixth biggest story with 2.6% of the newshole, and in June it was 5th biggest story with 4.7%. Overall, immigration was the 12th story of the year at 1% of the online newshole.

Overall among the websites, immigration made it into the yearly top 10 story list only on CNN.com. It was the seventh biggest story for the year at 1.8%. This can be in part attributed to the fact that the CNN.com homepage mirrors to a certain degree the news tendencies of its cable counterpart. Lou Dobbs’ commentary pieces on immigration appeared on CNN.com at least five times during the period from March to November.

As we mentioned in our State of the News Media 2008 report, “both AOL and Yahoo use wire services for more than 90% of their lead news coverage on their sites, most of it coming from the Associated Press. Google News, on the other hand—a site that produces no original content—had 17% of wire stories and 82% of the coverage was original reporting by the cited news organization.” For CNN.com most of the stories were by internal staff reporting (61%) and wire reports (32%). For MSNBC.com 54% of the lead stories came from the wires. Overall the same pattern was evident for immigration stories across these news websites. Most of immigration stories online were wire stories (44.3%) while 27.4% of the lead stories on immigration were internal staff reporting and original reporting by the cited news organization (also at 27.4% of the online newshole).

Next: Conclusions
← Prev Page
Page1Page2Page3You are reading page4Page5Page6Page7
Next Page →