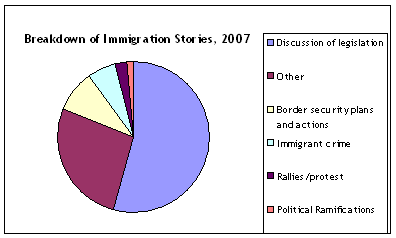 One of our Talk Index reports spotlighting immigration summarizes the timeline of the immigration bill in the following way:

“On May 17, the Senate and the White House announced a compromise agreement on a wide-ranging bill attempting to deal with the nation’s troubled immigration system. The measure was backed by the President and some senators, mostly Democrats, but generated opposition from both the right and the left. Forty-two days later, on June 28, the legislation died in the Senate despite an energetic White House effort to save it”.

As mentioned previously, during this time immigration was the top story followed closely by the presidential campaign coverage across all media. This was also the case in individual sectors. Coverage of im 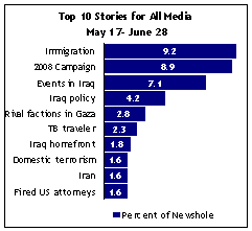 The higher numbers in cable and radio could be attributed to the talk hosts in both sectors. Within our studies at PEJ, we try to capture the media universe of talk and opinion with our Talk Index which includes seven prime time cable shows and five radio talk hosts. Here we will treat them separately. First the cable talkers.

Our universe of cable talkers include the following: Lou Dobbs from CNN; Bill O’Reilly, Sean Hannity & Alan Colmes from FOX; Tucker Carlson, Keith Olbermann, Chris Matthews, Joe Scarborough for the first half of 2007 and Dan Abrams for the second half of 2007 from MSNBC. 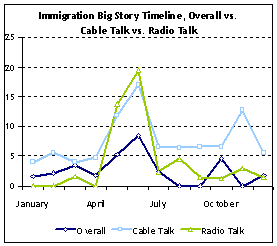 Overall the cable news agenda is measurably different than other media. As stated in PEJ’s State of the News Media 2008 report, “the focus on prime time is talk, and tends toward the political and the controversial. More than any other medium we have studied, the definition of news differs depending on the outlet.”

For 2007 in cable TV talk, immigration was the third biggest story for the year at 7.4% of the newshole, following presidential campaign coverage at 21.1% and Iraq policy debate at 13.6%. For the period between May 17 and June 28 we see immigration at 18.5% of the newshole at second place right after presidential campaign coverage at 21.1%. Also during this period, 20% of the time immigration was the lead story of program. Immigration coverage spiked in May and June in comparison to the rest of the year.

The news agenda on cable to some extent depends not only on the channel but also on the host of the program. Among all the cable talkers, the one who was most clearly devoted to the cause of immigration was CNN’s Lou Dobbs. While throughout the whole year immigration was the number one story at 22%, during this specific time it skyrocketed to 43.1% of the time studied on Dobbs. Besides offering a timeline of the immigration bill debates within the Senate, Dobbs openly criticized the bill as an amnesty bill for illegal aliens in the country, pointed out how the bill would cost taxpayers a lot of money, and emphasized the need for better border security, which according to him was not a part of the proposed bill. He also was critical of George Bush, Ted Kennedy, Michael Chertoff, Lindsay Graham, Trent Lott and their stance on immigration. The night the 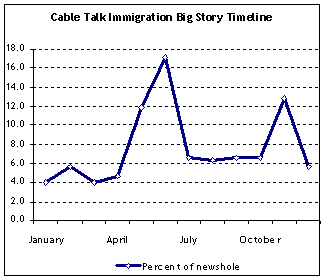 immigration bill failed, Dobbs began his program with these words: “Tonight the crushing defeat for President Bush and the Senate’s Democratic leadership on amnesty, a glorious victory for the American people.”

Immigration in 2007 was a bigger story for Bill O’Reilly on Fox than it was for Sean Hannity and Alan Colmes. While for the year it was the top story at 11.4% of the newshole for O’Reilly, immigration ranked 6th at 2.5% for Hannity & Colmes overall. During May 17-June 28 immigration continued to be the top story for O’Reilly at 19.4%. For Hannity & Colmes however, the increase was more significant. Immigration became the second biggest story during that time, occupying 16.5% of the newshole. During this time O’Reilly offered his opposition to the bill, but in comparison to the rest of the year did not go beyond his usual fare of immigration coverage, which mostly seems to focus on illegal immigration, immigrant crime, raids and rallies. Hannity & Colmes’ coverage on immigration during this time seemed to center more on outlines of the bill and interviews with experts and pundits on the provisions in the immigration bill.

Among cable channels, MSNBC is the one trying to position itself as the “place for politics.” This is to some degree evident in its programming. While Tucker Carlson and Chris Matthews devoted 43.8% and 40.9% of their newshole respectively to campaign coverage, Keith Olbermann was more concerned with Iraq war policy (23.8 % of the newshole) for 2007. This did not change for the period from May 17 to June 28 these same topics continued to dominate their agenda. Campaign coverage for Chris Matthews was at 48.5% (immigration was at fourth place with 5.1%). For Olbermann, immigration as an issue was not even in the top 10, he continued to devote his time to Iraq policy and campaign coverage. Tucker was the only MSNBC host studied that showed some interest in the bill. Immigration coverage was at number two at 18.8% after campaign coverage (39.9%).

As we state in our State of the News Media 2008 report, “one of the most striking characteristics of talk radio is its tendency for hosts to seize on the news and amplify those events.” Immigration policy coverage accounted for 22 % of the newshole for Talk Radio during May 17-June 28. Analysis of this time period 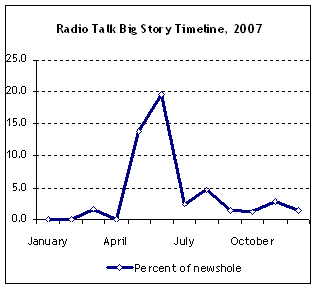 underlined the ideological differences between the conservative and liberal talk radio hosts. Conservative radio hosts devoted 31% of their newshole to the coverage of immigration, while their liberal counterparts paid little attention. Immigration ranked at 6th place with only 3.6% of the newshole for this period among liberals.

Conservative talkers Rush Limbaugh, Sean Hannity and Michael Savage were highly critical in their coverage of the immigration bill. Rush Limbaugh on May 18 accused democrats of trying to destroy America. He also was highly critical of Trent Lott for supporting the immigration bill and his attack on talk radio saying “Talk Radio is running America, we have to deal with that problem.” The “drive-by” media as Limbaugh likes to reference (i.e. the liberal media) also was on the receiving end of criticism for their coverage of the immigration bill. Limbaugh more than once criticized the New York Times for push polling on the issue.

In his coverage of the immigration bill, Sean Hannity—like Limbaugh labeled the bill as an amnesty bill, and throughout the period continued his attack calling the bill “a disaster on many levels.” On June 7th he said the amnesty bill was not dead yet but was on its way, a victory for conservatism.

Story Selection in 2007, Conservative vs. Liberal Talk Radio
Source: PEJ, A Year in the News, 2007 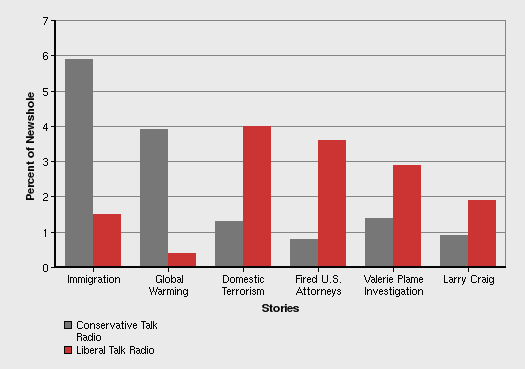 Immigration coverage was not on the agenda of liberal talkers Ed Schultz and Randi Rhodes. In fact, for the whole year Randi Rhodes for the whole year did not devote any time to the topic of immigration in the hours studied. When Ed Schultz commented on the demise of the immigration bill it was to say that the bill should have included checks and balances, and to declare his support for the guest worker program. The ideological division between the conservative and the liberal talk radio hosts was clear on this issue.

The immigration debate was the biggest story for newspapers in May 17-June 28, filling 8% of the front page newshole studied, closely followed by campaign coverage at 7.5% and events in Iraq at 7.1%. The emphasis in print is greater than it first seems, considering our analysis includes only the front page articles of national, regional and local papers. [1] 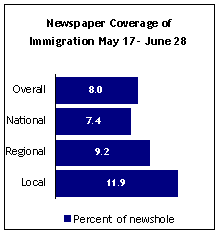 What was most striking about newspapers’ coverage during this specific period was that, besides offering the timeline for the immigration bill within the Senate, they also highlighted some aspects that other forms of media seemed to overlook. For example, the New York Times on May 20 offered the immigrants’ point of view on the bill in an article entitled “Illegal Migrants Dissect Details Of Senate Deal;” on June 25 the Washington Post spotlighted how individual states were cracking down on illegal immigration as a response to the stalled immigration bill with an article entitled “Illegal Immigrants Targeted By States; Impasse on Hill Spurs New Laws.” The Los Angeles Times on May 27 actually provided details of the proposed immigration legislation and explained how the bill was pulling the GOP in two directions in “Immigration Debate Puts Up a Wall in the GOP; Pursue Latino Voters or Please the Party’s Base? The Senate Overhaul Bill Reveals a Split on What Political Road is Best for Republicans.”

The Boston Globe article dated June 5 drew attention to the fact that if the bill passed, newly legalized immigrants would be contributing $26 billion to the US economy over a decade. The Albuquerque Journal spotlighted the labor shortage in New Mexico and immigration law limitations with “Finding a Way to Solve State’s Shortage of Workers” on June 10. On June 29 after the bill failed, the Bakersfield Californian ran an article on local reaction to Senate’s rejection of the immigration reform. The Chattanooga Times Free Press had an array of articles: spotlighting lack of local support for the bill once on May 29 with “Immigration Bill Draws Opposition from Area Lawmakers” and then on June 26 with “Immigration Bill Lacks Area Support in Senate”; local employers’ cautious approval of the guestworker program in the immigration deal on May 25; and on June 24 localizing the context of the bill with “Bush’s Immigration Zeal Has Texas Roots.”