On Super Tuesday week, with voters from 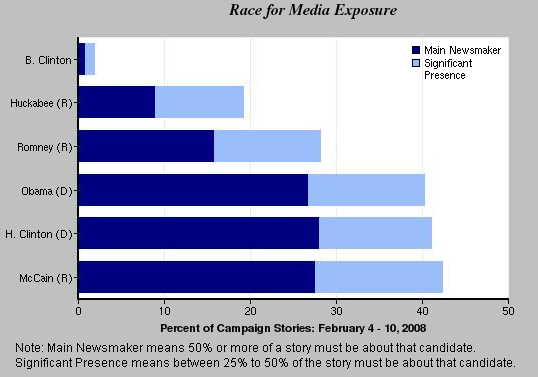 about half the states weighing in, coverage of the 2008 presidential race reached its highest level to date. And when the winnowing was done, just three candidates—out of a field that once included 20—stood out in the glare of the media spotlight.

But the journalistic narratives were not really the ones for which any of those three—Hillary Clinton, Barack Obama or John McCain—was probably hoping.

Instead, a tone of additional challenge rather than triumph, and of continuing suspense, characterized the coverage last week, a period that began the day before Super Tuesday and stretched through a smaller series of weekend contests.

On the Democratic side, Clinton was a significant or dominant factor in 41% of the campaign stories from Feb. 4-10, just ahead of Obama, at 40%. By week’s end, however, the media were depicting her as a beleaguered ex-frontrunner trying to counter Obama’s momentum.

For his part, Obama fell short of some last-minute media expectations by failing to win such key states as Massachusetts or California and could not lay claim to the frontrunner mantle that some possibly erroneous media polls and excited commentary seemed to hint at. Instead, the week ended with the press contemplating a scenario that many Democrats dread—a deadlock decided by Superdelegates.

On the Republican side, McCain was every bit a match for the top Democrats in attention. A significant or dominant factor in 42% of the campaign stories examined, for the second week in a row he led all candidates in coverage—albeit by a hair. And outdistanced his nearest GOP rival by two-to-one. By winning the big Super Tuesday states on Feb. 5, McCain cemented his status in the media’s collective judgment as presumptive nominee.

That should have been cause for celebration in his camp. But as the week drew to a close, much of the media narrative concerned his continuing problems with what at times was described as a hostile conservative wing of the GOP. And in some ways, the surprise in the media was McCain’s inability to vanquish all challengers. 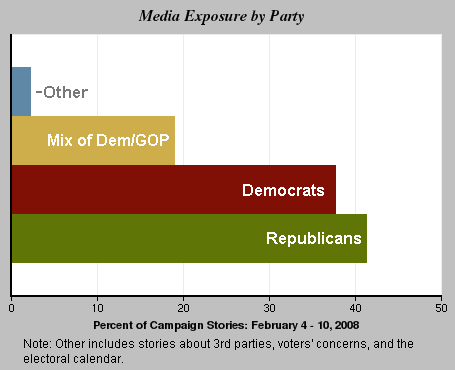 For those GOP rivals, there was one funeral and one resurrection last week. Mitt Romney, at 28%, earned his highest level of coverage in five weeks, but much of that was an obit for a bid that ended after a disappointing Super Tuesday. Mike Huckabee again flummoxed the media mavens after he won in seven states last week. Coverage of Huckabee in turn increased nearly ten-fold from the week before, from 2% to 19%. But while his campaign was re-ignited, Huckabee still generated only about half the coverage of McCain. The press continued to treat him as a quixotic long shot, albeit a dogged one.

At least he got back in the headlines. Ron Paul, the libertarian Republican still standing in this race, remained off the media radar screen, generating less than 1% of coverage.

And just two weeks after injecting himself into the thick of the campaign and attracting more coverage than any Republican, Bill Clinton continued his disappearing act. Last week, he was a significant or dominant subject in only 2% of the campaign stories.

All told, the Republicans overall edged out the Democrats in the coverage derby last week, with 41% of the stories being mostly about the GOP candidates compared with 38% about Democrats.

Thanks to the Super Tuesday voting in 24 states and a handful of contests over the weekend, the campaign generated its highest level of weekly coverage, filling 55% of the newshole, as measured by PEJ’s News Coverage Index for Feb. 4-10. The race for the White House filled up a remarkable 74% of the airtime on cable last week and almost as much, 65% of the newshole, on radio.

On the Democratic side, that week of intense coverage started with a media narrative pointing toward a pre-Super Tuesday surge for the Illinois Senator.

That kind of coverage built expectations for Obama. But the Super Tuesday split decision—with Clinton holding him at bay in California and Massachusetts and New Jersey—initially generated headlines suggesting she had won by not losing. “Last night brought a sense of relief to the Clinton campaign,” reported the Washington Post on Feb. 6. On ABC’s Good Morning America, George Stephanopoulos recalled his prediction that Obama would move into the lead over Clinton if he could take two out of three key states—Massachusetts, Missouri, and California. “It did not happen,” he said flatly.

This may have been a clear case of expectations rather than results coloring the analysis. Only a week earlier, a Democratic split on Super Tuesday might have been considered an Obama triumph.

The story line shifted again a day after the voting with the news that Clinton had lent her campaign $5 million. That seemed largely served to highlight Obama’s fundraising prowess.

Obama followed up with weekend wins in Nebraska, Louisiana, Washington and Maine. But by the end of the week, the media were less interested in trying to figure out which Democrat had inched into a momentary advantage and more interested in the implications of enduring deadlock. On Feb. 10, the New York Times and Washington Post published page-one stories looking at the possibility that it would be party bigwigs, rather than voters, who would be the deciders.

For McCain, the Super Tuesday results, with his crucial California win, did winnow the field by forcing the withdrawal of Romney, viewed by the media as his most formidable challenger. “Senator John McCain seized command of the race for the Republican presidential nomination,” declared the Associated Press story summing up the Feb. 5 voting.

Expectations again may have been a factor here. Many press accounts anticipated that that Romney’s last stand would end the race. But when Huckabee proved a stubborn survivor, the media narrative quickly moved, perhaps justifiably, from McCain’s path to the nomination to his trouble with the party’s more conservative adherents. There was less inclination to focus on the remarkable unlikelihood of his triumph from the political ashes a few months earlier.

On Feb. 7, the Wall Street Journal’s front-page noted that “rarely has a party’s pick made so many enemies along the way, from church pews to corporate boardrooms.” The next day, CBS’ Early Show reported on, as did much of the media, the decidedly mixed reception McCain received during a Feb. 7 speech to conservative activists. “He did get booed on the issue of immigration,” said correspondent Chip Reid. “They just detest him on certain issues—campaign finance, immigration and a few others.”

That anger toward McCain has also in some ways simplified the interpretation of Huckabee’s success. When the former Arkansas governor—no favorite of the Republican right himself—defeated McCain on Feb. 9 in Louisiana and Kansas, the Washington Post declared him “the vehicle for a conservative rebuke of the idea that [McCain] had sewn up the Republican nomination.”

Romney ended his campaign on an emotional high note before a friendly crowd at the conservative CPAC convention. Many of the Mitt post-mortems suggested that he might well have another presidential run in him. But Romney’s evolving positions on a number of issues earned him the distrust, if not the enmity, of a number of pundits and commentators.

“Here lieth the campaign of Mitt Romney, victim of the mistaken belief that the only way to succeed in national Republican politics was to turn yourself into something you are not,” wrote Newsweek’s Howard Fineman.

As for Huckabee, the week started with calls for him to withdraw. It ended with Huckabee dubbed the Super Tuesday “surprise” for his strong showing in the South. On MSNBC on Feb. 8, Huckabee’s campaign manager Chip Saltsman, when asked why his candidate persists against such long odds, reminded everyone of the fallibility of the punditocracy.

Journalists made some amends to Huckabee. After barely registering in coverage for the week of Jan. 28-Feb. 3, he vaulted back into the news mix last week, proving once again that the media ignore him at their peril. But if media exposure is any measure, the press corps still does not see him as a viable contender.

The devastating string of Super Tuesday tornadoes in the South, which filled 7% of the newshole according to the NCI for Feb. 4-10, supplanted the U.S. economy as the second-biggest story of the week. The troubled economy slumped to third place at 5%. That was followed by coverage of Super Bowl 42, in which the Giants pulled a huge upset victory over the Patriots (3%), and domestic terrorism (2%) a story given legs last week by the CIA’s acknowledgement that the U.S. had used waterboarding on three terror suspects.