The Iraq War, while still the major story of the year when all its threads are combined, lost some momentum in media coverage in the second quarter of 2007.

Taken together, the newshole devoted to three story lines of the war—the debate over policy, events in Iraq itself, and the situation with veterans and families on the homefront—fell in the second three months of the year by roughly a third, to 15% of the Index, down from 22% of the newshole in the first quarter. 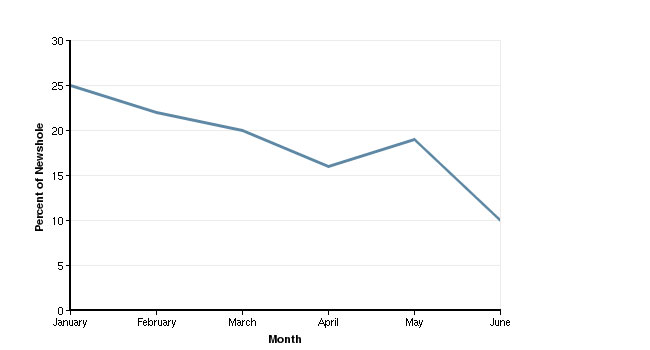 Attention dropped in all five media sectors studied. And some media that covered the war most heavily in the beginning of the year cut back most. Network evening news, the sector that gave the war the greatest percent of attention in the first quarter, scaled back more than 40% (from 33% in the fist quarter to 19% in the second). For Cable TV, another leader in coverage in the first quarter, the decline was nearly as great (it fell from 23% to 14%, a drop of 39%).

The greatest pull-back was among the combined group of radio and cable talk show hosts that make up the Talk Universe in the PEJ Index. The subject that ate up more than a quarter of their time from January through March was about half that, 13%, in these next three months. 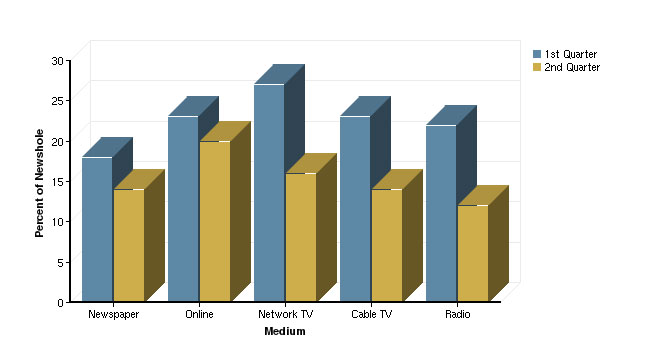 The one sector that stood out for maintaining its focus on the war was online news. Here, where coverage of the war made up a smaller percentage in the beginning of the year, that percentage dropped only slightly, from 23% in the first quarter to 20% in the second. Yahoo News gave the war the most play at 25%. Even on AOL News, the site least devoted to the war, it made-up 17% of the newshole studied. What also stands out online is the specific storyline stressed. Rather than the policy debate in Washington, it was events inside Iraq that led. News from the war torn country was the top story on all five websites studied.

While devoting less time to the war overall, the media at same the time managed to broaden their focus. The Index breaks the coverage into three main storylines—U.S. policy debate, events in Iraq, and war-related issues back home. In the first quarter, the policy debate, largely in Washington, dominated, accounting for more than half (55%) of the war coverage (and at 12% of the media’s total newshole was also the top story overall).

Coverage about events in Iraq made up roughly 30% of the war coverage and just 14% focused on war-related issues back home (primarily the controversy over conditions at the Walter Reed Army Hospital). Most of what people learned about, then, was not the war itself but the argument over what to do about it.

In the second quarter of the year, the focus was not nearly so one-sided. The policy debate still led, making up 46% of the war coverage. But events in Iraq were nearly as prevalent at 43%. And coverage of issues back home fell to an even smaller portion—just 10%. 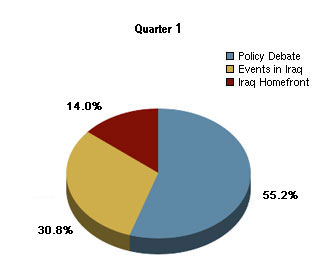 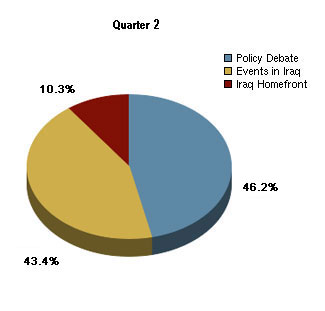 In total, coverage of the Beltway-based political debate over U.S. policy towards Iraq fell from 12% of the total newshole to 7% while coverage of events in Iraq itself remained constant, 7% both quarters, and still largely focused on U.S. casualties. Coverage of the war on the homefront dropped from 3% to 2% this quarter.

What was the genesis of the drop away from the policy debate? A key factor was the May 24 Congressional vote that funded the war, but did not—as many Democrats wanted—include troop withdrawal timetables. That vote was not only the culmination of a bitter months-long political battle over the war between the White House and Congress that began with the January 10 announcement of the “surge” policy. It was also widely viewed by the media as a victory for President Bush that, at least temporarily, settled the policy debate in favor of the administration.

“Congress Bows to Bush, OKs Iraq Funds” read the headline on the Associated Press story about the vote.

In the aftermath, the debate itself quieted, as did coverage. In the period between May 27 and the end of June, the Iraq policy debate accounted for only 3% of the total news coverage.

Another finding in the first quarter was how much the war coverage focused on Americans rather than on Iraqis. Fully half of the coverage about events inside Iraq was about American combat and casualties as opposed to Iraqi casualties, Iraqi internal affairs, reconstruction efforts or other matters.

In the second quarter, the picture looks similar. News from inside Iraq became even more U.S. focused. Fully 55% of coverage about events on the ground dealt with U.S. combat and casualties, U.S. troop activities and soldiers charged with crimes.

Events in Iraq
Breakdown of Specific Storylines across All Media

The War on Cable TV

Will where one goes for news influence how much coverage of the war they will see?

In the first quarter, one of the most commented on findings was that the cable news networks had not covered Iraq in equal degrees. Fox News spent a much smaller percentage of time on the war than did its two cable rivals (15% of the newshole versus 25% on CNN and 31% on MSNBC).

In the second quarter the gap remained and in some cases even widened, if looked at overall. Fox news devoted roughly half as much airtime as the other cable channels to the war. Total war coverage accounted for 8% of the Fox newshole, versus 18% for CNN and 15% for MSNBC.

The most prominent gap existed in coverage of policy debate. It was the top story on CNN in the second quarter (10%), and the No. 2 story on MSNBC (13%), behind the presidential campaign. However, the debate over the policy in Iraq ranked as the 4th biggest story on Fox, making up 5% of the newshole.

The differences were not as clear when it came to coverage of events in Iraq, however. Here, according to our data, Fox was half as likely to cover the story as was CNN, with events on the ground filling 3% of the airtime on Fox versus 6% on CNN. On MSNBC, events inside Iraq made up just 2% of the newshole.

The homefront story all but disappeared on cable generally, making up 1% of CNN and less than that on Fox and MSNBC, margins too small to make much difference among the three.

Looking at the full six months of 2007, CNN (at 21% of the newshole) and MSNBC (at 23%) were virtually equal in total coverage of the war in Iraq. The Fox News Channel, at 11%, devoted about half as much airtime to the conflict.

NBC and MSNBC: The ‘B’ Stands For Beltway

One other finding becoming clearer in 2007 is a particular orientation of one news operation, that of NBC and its cable sibling MSNBC.

In a three-month span in which overall coverage of the 2008 presidential campaign accelerated and coverage of the Iraq policy debate lessened, the two NBC outlets distinguished themselves with their focus on Beltway politics.

That emphasis is clearest on the cable news channel. MSNBC in the second quarter aired more than twice the amount of campaign news as its two leading cable competitors. Slightly more than one-fifth (21%) of all MSNBC’s coverage in the second-quarter was focused on the campaign compared to 10% at the Fox News Channel and 9% at CNN.

Those differences prevailed in both daytime and prime time cable. During the afternoon programming monitored in this study—which tends to focus more on live, breaking events—the campaign was still the lead MSNBC story, filling 9% of the time. But it was only the sixth-biggest daytime story on CNN (3%) and the ninth-biggest on Fox (2%).

In the prime time hours of the second quarter, MSNBC’s anchor lineup includes a former GOP Congressman (Joe Scarborough), a former Democratic House Speaker Tip O’Neil aide (Chris Matthews), a veteran conservative pundit (Tucker Carlson) and an émigré from ESPN who has become the darling of liberals (Keith Olbermann). Across those prime time hours, more than a quarter (26%) of the time was spent on the presidential campaign compared with 11% at Fox and 10% at CNN. The other dominant Beltway-centric story in the second quarter of 2007 was the policy debate over Iraq. Here too, MSNBC covered this story more heavily than its rivals. MSNBC devoted 13% of its overall coverage to the policy debate, making it the second-biggest story of the quarter behind the campaign. That was measurably more than CNN’s, which devoted 10% of its newshole was filled by the policy debate (though this was still enough to make it the CNN’s top story). And that was nearly three times as much as Fox, which devoted 5% of its newshole to Iraq policy. As was the case with the presidential campaign, the big difference in priorities on cable emerged in prime time where the Iraq policy debate consumed 17% of MSNBC’s airtime compared to 11% on CNN and 6% on the Fox News Channel. When added together, the top two Beltway stories on MSNBC’s prime time lineup—the campaign and the battle over Iraq strategy—accounted for nearly half (43%) of all its newshole. On CNN and the Fox News Channel, the top two stories only consumed about one-fifth of the prime time airtime, at 21% and 17% respectively. For those who want a Washington orientation in their news and watch cable, they are more likely to get it on MSNBC.

Is the Beltway orientation limited to the company’s cable channel, or does it also reflect a tendency at the commercial broadcast network? The numbers suggest that there is a measurable difference on the broadcast side as well, though less dramatic.

In the mornings, all three networks made the presidential sweepstakes the top story, during their first half hour, when they shows air most of their hard news. But it was biggest on NBC’s Today show, where it filled 13% of the time. That compares with 11% on ABC’s “Good Morning America” and 9% on CBS’s “Early Show.”

The split was similar in the evening. Brian Williams’ “NBC Nightly News” devoted 5% of its airtime to the campaign (making it the fourth-biggest story in the quarter). “The CBS Evening News” with Katie Couric devoted 3% of its coverage to the campaign, which was its fifth-biggest story. And on ABC “World News Tonight” anchored by Charles Gibson, the subject filled 3% of the newshole as the sixth-biggest story.