It’s not hard to find signs of gloom and doom for the newspaper industry. Circulation is falling at many dailies – in some cases in double digits. Staffs and budgets are being cut. And now, just months after investors forced the dissolution of the giant Knight-Ridder chain, the Tribune company is considering selling properties in the face of a revolt from key shareholders of its own.

All of which means it’s not a great time to be looking for work with a newly minted undergraduate degree in print journalism, right? Well, no actually. In fact, 2005 was the best year since 1999 for print grads to find a job in their field, according to a new study, the 2005 Annual Survey of Journalism and Mass Communication Graduates from the University of Georgia.

The numbers have also improved noticeably for those with undergraduate degrees in broadcast journalism. Roughly 65% of 2005 broadcast grads had full-time broadcast jobs by October 2005, up from 57% two years before. 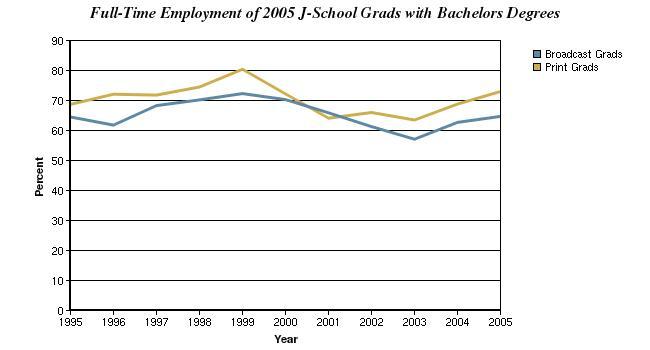 What explains the upbeat employment picture, particularly for those with a concentration in print? One reason is that the turmoil and cuts in the newsrooms of the LA Times or Philadelphia Inquirer have little to do with the experience of the new graduates who tend to get startup jobs at smaller papers, says Lee B. Becker, director of Georgia’s James. M. Cox Jr. Center for International Mass Communication Training and Research.

“Most students don’t come out of school and get jobs at large newspapers,” Becker says. “Most of the graduates find work at smaller papers.” And while major metro dailies have borne the brunt of the newspaper recession, smaller, community-oriented papers have proved to be considerably more stable.

Another reason is the increasing online presence of older, mainstream news organizations – print and broadcast. As those outlets grow their websites, those operations need content, and that means jobs. More than 30% of all 2005 J-school bachelor degree grads do “writing or editing for the web” in some way, shape or form, according to the survey. That’s up from roughly 23% in 2004.

Becker says most of those web writers and editors are doing online work at traditional news organizations, not web-only outlets. “They are working on the websites of newspapers and local TV stations,” he says.

In other words, a few years into the technological revolution, traditional media outlets are deciding it is easier to teach a journalist how to run a content management system and learn a few lines of code than to teach techies how to write leads.

The news, however, may not be all good.

The traditional road for many journalists is a few years at a small outlet covering local issues before moving up to a mid-sized market and, eventually, the big city. The web may change that. But all those declining audiences and newsroom cuts may still have an impact on today’s grads. In other words, the troubles may not hurt when it comes to getting that first staff job in Peoria. That job in Philly, L.A., Chicago or Boston, however, might be further away than ever.