The Los Angeles Times is the largest newspaper in California and on the West Coast with a circulation of 905,107 Monday through Saturday, according to the most recent audited numbers. The paper’s storied history includes 37 Pulitzer Prizes since 1942.

For more than 100 years the paper was controlled and tied to the Chandler family, members of whom served as owners, editors and publishers.

In 2000, the Tribune Company gained control of the paper when Tribune acquired Times Mirror, the newspaper’s parent company.

Recently, however, members of the Chandler family who sit on the board have been critical of the merger, particularly Tribune’s management of the Times, and in recent months family members have looked for someone to wrest control of Tribune. Last week those family members wrote a letter to Tribune management “demanding” the company sell off some of its assets including television stations and newspapers. The Chandlers, who own 12% of Tribune said the company has managed its assets poorly and cited the company’s 40% drop in stock prices in recent years. (See the accompanying stock chart.) 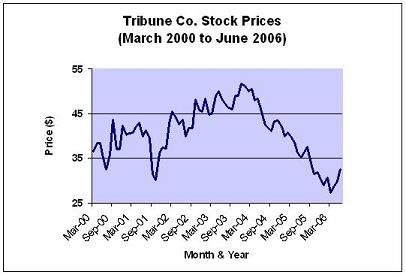 In one sense, the efforts of the Chandler family, which involve trying to find a Los Angeles-area buyer for some Tribune assets, bear some resemblance to what occurred involving the Knight Ridder Corporation, when the largest shareholders forced the sale of the company.

The Tribune situation, however, is perhaps more complicated. Tribune is a large company with vast holdings including the Times, Newsday and television stations in seven of the country’s top ten markets. There is history of internal conflict at the LA Times, much of which began before the Tribune took over ownership. In addition, some of Tribune’s problems were inherited from Times Mirror, such as the circulation scandal at Newsday (a former Times Mirror paper).

Observers say the Chandler family is trying to convince the board that selling off assets is a good idea and want to put the company into play. Tribune management is trying to resist that.

Herewith is a collection of links along with some narrative to help people understand the current situation, the history, and the newspaper industry as a whole.

If you know of other relevant pieces of content, please email us.

The History of the L.A. Times

The latest controversy is not the first for the modern Los Angeles Times. In the mid-1990s, the Chandler family that owned the paper forced out the management team put in place by patriarch Otis Chandler and hired an executive from General Mills to take over as CEO of Times Mirror, the parent company. The former cereal executive, Mark Willes, vowed he would revolutionize the way newspapers were run, making sure each section could justify its existence either in readers or revenue. The editor, Shelby Coffey III, quit in protest, and within three years, the Times found itself embroiled in scandal over a basic principle—conflict of interest with those you cover. It was discovered that Willes’ management team at the Times had secretly approved a deal to share revenues on a special issue of the Sunday Times Magazine with the new Staples Center arena, which was the subject for that week’s edition. The Staples Center lobbied all of its business associates to buy ads in the magazine, and it split the revenue with the paper. The scandal proved an enormous embarrassment, which inspired a letter of condemnation from then retired Otis Chandler and ultimately led to the sale of the company to Tribune.

In April 2000, John Carroll became editor of the Los Angeles Times. During his tenure, the paper won 13 Pulitzer Prizes. Carroll stepped down as editor in August 2005, however, after clashing with Tribune management, which insisted on cuts in the newsroom. Before Carroll departed, his publisher John Puerner, had earlier left the paper, reportedly over differences with Tribune bosses. In April of 2006, Carroll addressed the American Society of Newspaper Editors about the future of the newspaper industry.

“Trouble at the L.A. Times,” a PBS roundtable discussion on the Controversy from December 1999.

The Question of “Cross Ownership”

Also at stake in the Tribune controversy are issues of crossownership – markets where the company owns both a newspaper and a local television station. Tribune owns both types of outlets in Los Angeles, Chicago, New York, Hartford and Fort Lauderdale. On June 19 2006, The New York Times delved into this aspect in its coverage of the developments.

In the 2005 State of the News Media Report, we discussed at length the history of the FCC ownership rules and mentioned how “in anticipation of further deregulation, companies including Tribune, Gannett, and Media General had acquired newspapers in markets where they also owned TV stations.” The FCC has the power to block the transfer of a TV station license, but has no authority over newspaper ownership. This has led to ambiguity about what it can do when a newspaper purchase leads to a violation of cross-ownership rules.

In the 2006 report, we discussed the continued uncertainty of ownership regulations due largely to the FCC’s lack of consensus.

The FCC has announced that it will launch its review of media ownership rules on June 21, 2006. According to trade magazines, FCC chairman Kevin Martin, who favors loosening the rules further, thinks he can win enough support from the 5-member commission to carry his position. The review will mark the first time since 2004 that the FCC has approached the issue.

The popular argument put forth by deregulation foes has long been that loosening ownership rules restricts the diversity of voices (and choices) a consumer has in a market. But the case of Tribune raises a different business-side concern about how desirable deregulation and crossownership even are.

As the Chandlers wrote to the Tribune board, the basic premise of the Tribune and Times Mirror merger was that the cross-ownership would lead to “above industry” performance, but that the “strategy has failed.” They are demanding, instead, that the company separate its TV holdings from its newspaper businesses.

As the actual study and review of regulations is likely to take months and any final consensus even longer, developments like those at the Tribune Co. and others may have an impact on the direction of the debate.

“When the news breaks in your back yard, dig”
Phil Rosenthal, Chicago Tribune, June 16, 2006

“The State of the News Media 2006,” a study of American journalism by the Project for Excellence in Journalism; includes an analysis of the newspaper industry.

Next: Key Figures about Tribune Co.
← Prev Page
You are reading page1Page2
Next Page →