Audience engagement with legislators’ posts has generally increased over the past five years. But that engagement has also varied significantly as events unfolded and shaped the broader political climate.

By tracking notable day-over-day increases in engagement for the typical Democratic and Republican member of Congress, Pew Research Center researchers identified a number of events that were associated with rapid surges of favorites, reactions, retweets and shares since 2015. These events are defined as starting on days in which all four of these measures increase by at least 10% relative to the day prior, and include all subsequent days in which all four measures continue to increase.

It is important to note that these events are not necessarily days that produced “viral” or high-engagement individual posts. Instead, these events are associated with broad-based increases in engagement for a broad spectrum of lawmakers in a particular party. As such, they can be considered events that most excited a wide swath of the social media audience belonging to one party or the other.

Among Republicans, the single greatest period of increased audience engagement at the level of the average lawmaker occurred on Dec. 17-18, 2019, when President Trump was impeached by the House of Representatives. During this period, favorites and retweets on the typical (median) Republican’s average tweet increased more than seven- and eight-fold, respectively, compared with the prior day (Dec. 16). Engagement also spiked on Facebook, where the reactions and shares received by the typical Republican’s average post increased by 158% and 281%, respectively. 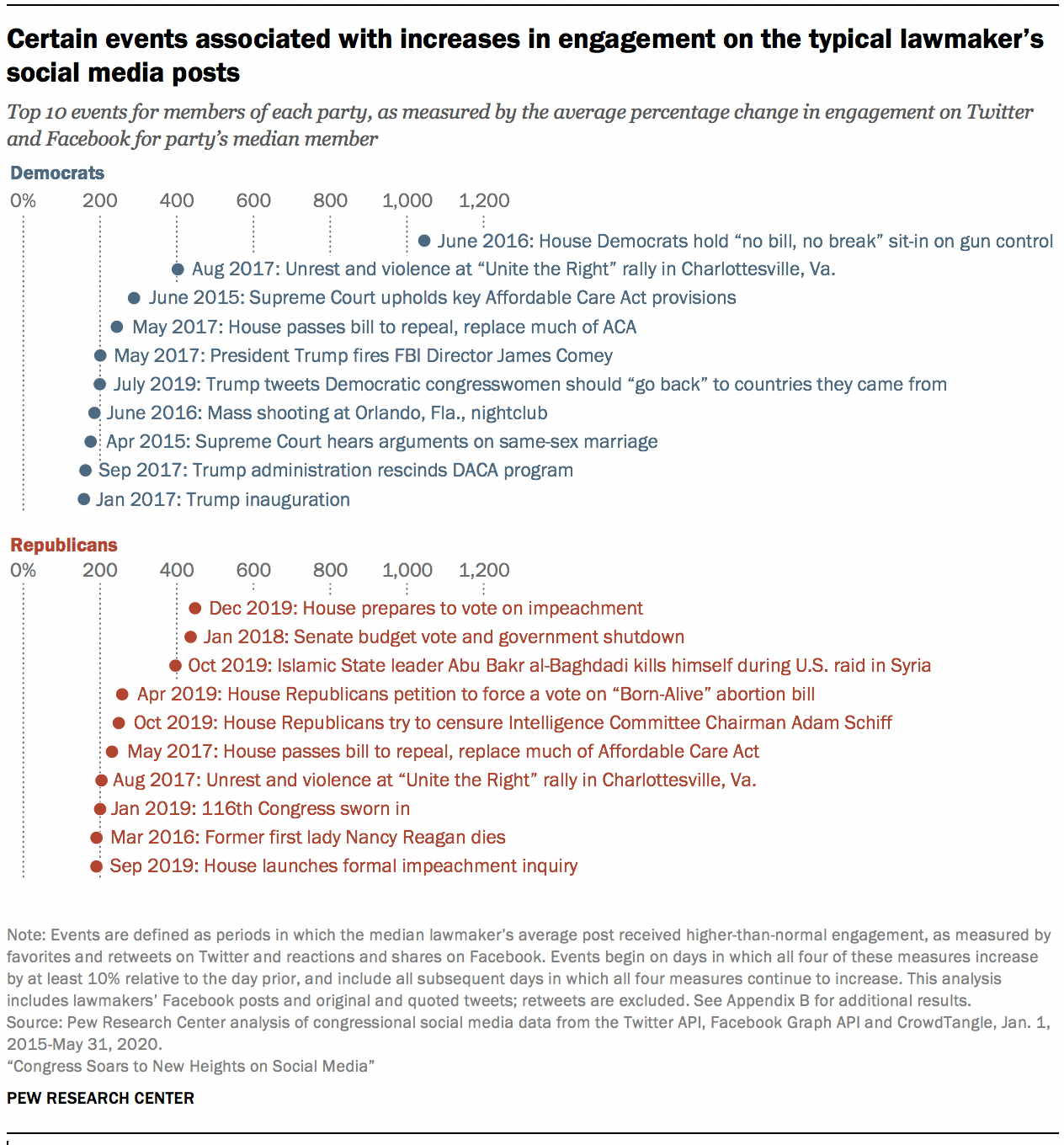 Other notable spikes in audience engagement for the typical Republican lawmaker include the January 2018 government shutdown, the beginning of the 116th Congress in January 2019 and the death of Abu Bakr al-Baghdadi on Oct. 27, 2019. So far in 2020, the greatest engagement boost for Republicans occurred on April 16 after Trump and the White House coronavirus task force announced new guidance on reopening the country in the wake of the pandemic.

The greatest spike in engagement among Democrats occurred on June 22, 2016, when House Democrats staged the “no bill, no break” sit-in to demand progress on gun control legislation. On this day, the typical Democrat’s average tweet generated more than 12 times as many favorites and retweets as was the case the day prior. Meanwhile, reactions and shares for the typical Democrat’s average Facebook post increased by over eight and 11 times, respectively.

The typical Democrat also experienced substantial boosts in engagement in the wake of the August 2017 Charlottesville protests, when the Republican-controlled House of Representatives passed the American Health Care Act in May 2017, and when the U.S. Supreme Court upheld key components of the Affordable Care Act in June 2015. The largest increase in engagement for Democrats in the first five months of 2020 occurred during Trump’s State of the Union address on Feb. 4. 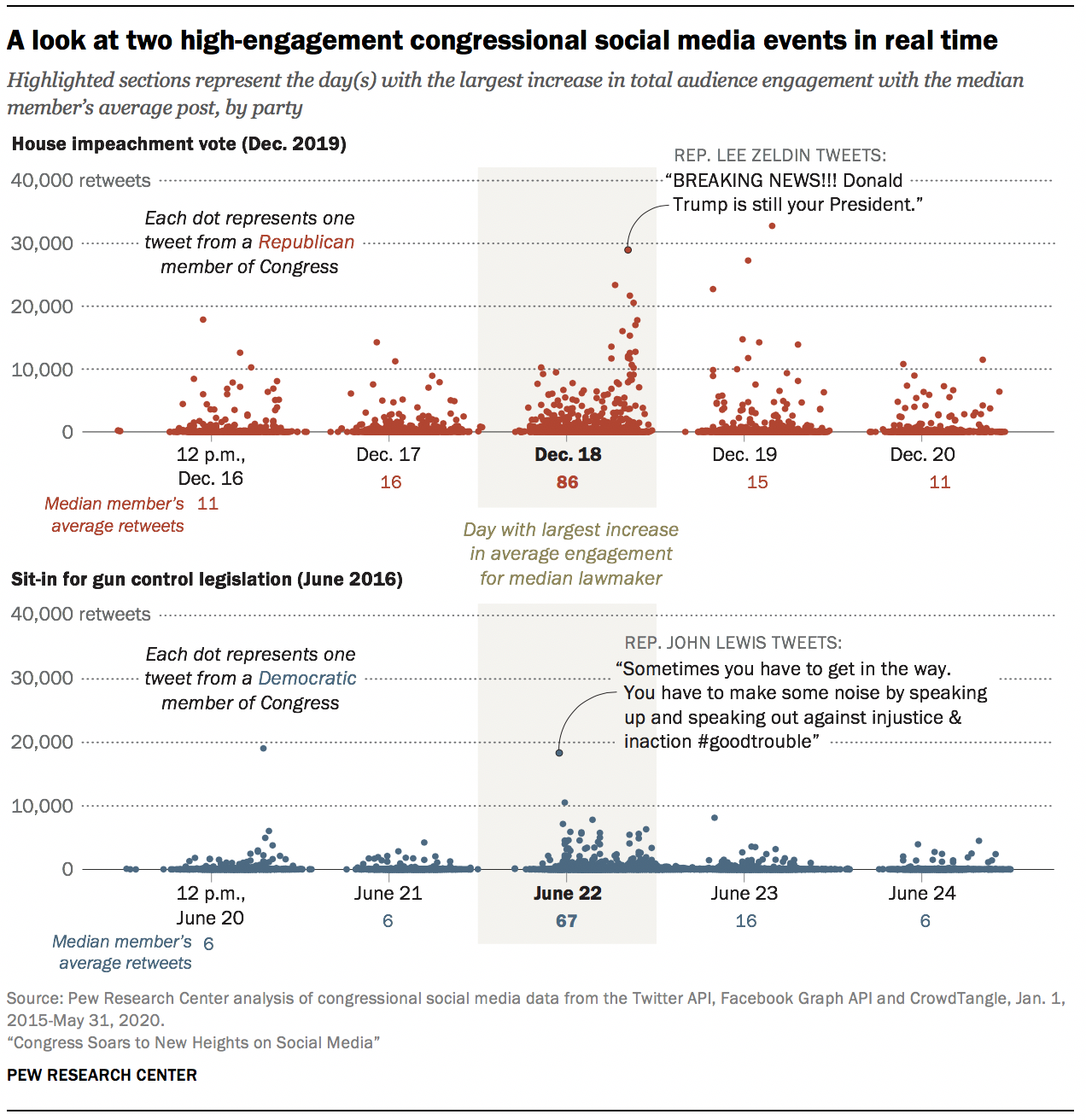 For each party, key terms are associated with greater levels of audience engagement

Beyond circumstances in the political environment, audience engagement with congressional social media posts can also vary depending on the specific words used in these posts. A large-scale computational keyword analysis finds that posts mentioning a variety of prominent political opponents or hot-button political issues tend to receive consistently more engagement than other posts, regardless of the size of a particular legislator’s social media audience. The analysis makes use of machine learning algorithms to predict the favorites, reactions, retweets and shares that posts get when mentioning certain keywords, and compares the predictions to a baseline post that didn’t mention the term. The algorithm also includes parameters for lawmakers’ specific social media accounts, allowing it to isolate the effect of each term independently of who mentioned it and reveal keywords that consistently boosted engagement for all members of a certain party.

In each year from 2015 through 2020, researchers identified between 347 and 572 unique terms that were mentioned at least 1,000 times on either platform and that were also associated with at least a 10% increase in both favorites or reactions and retweets or shares on both platforms. Yet there was consistently little overlap in the words and phrases that boosted engagement for members of both parties, at least among those associated with the largest shifts in engagement. In 2020, a total of 411 terms met the above criteria, but just 95 of them were associated with increased engagement for both Democrats and Republicans. The remaining 316 terms (77% of the total) only resulted in increased audience engagement for members of one party or the other. In other words, it appears that Democrats and Republicans have little in common when it comes to the language that resonates with their audiences on social media.

Across the timeframe, mentions of leading figures from the opposing party (such as Hillary Clinton and Nancy Pelosi for Republicans, or Trump and Mitch McConnell for Democrats) were associated with boosts in engagement for lawmakers from each party. Similarly, posts from Republicans and Democrats that mentioned various terms related to Trump’s impeachment and Planned Parenthood also received a higher than average number of reactions, favorites, retweets and shares for the typical member of Congress. And separate hashtags related to the 2018 government shutdown – #TrumpShutdown for Democrats, and #SchumerShutdown for Republicans – were also associated with higher engagement on both Twitter and Facebook.

Among Democrats, the greatest average boost in engagement came from posts that mentioned the hashtag “#NoBillNoBreak” in 2016, which received an average increase in favorites, reactions, retweets, or shares of 543%, relative to the typical Democrat’s average post from that year. Other keywords related to gun violence (“gun violence”) and terms related to health care (“pre-existing conditions,” “paid sick leave”) were also associated with higher engagement among Democrats. And in 2018, “Judge Kavanaugh” was associated with engagement boosts averaging 210% among Democrats. 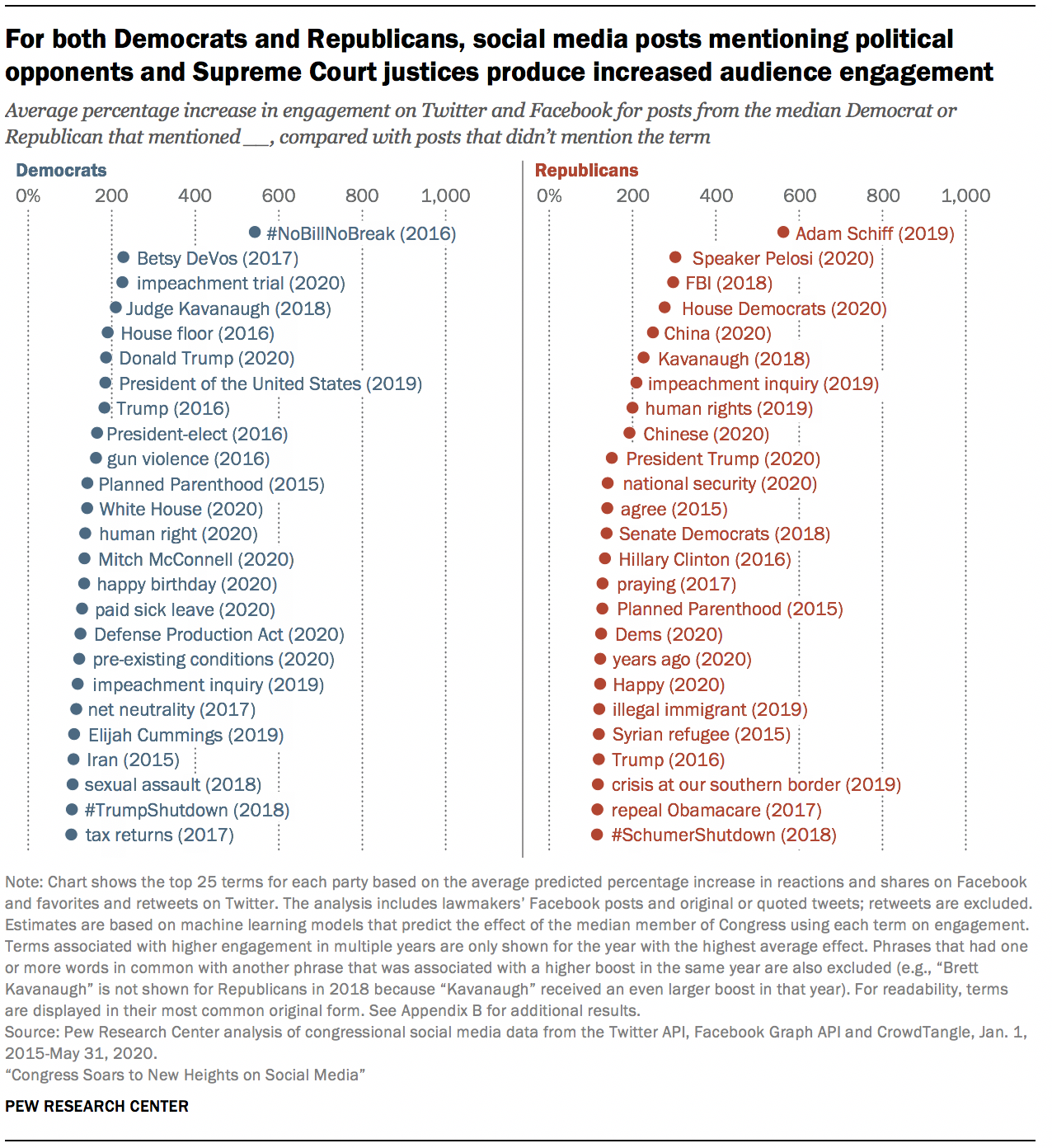 “Kavanaugh” also generated significant engagement boosts among Republicans in the same year, when posts that mentioned the Supreme Court nominee’s last name received between 211% and 243% more reactions and reshares on both platforms (the average increase was 227%). The term associated with the highest average engagement boost among Republicans was “Adam Schiff” in 2019 – a leading figure during Trump’s impeachment trial. The median Republican who mentioned the term received 196% to 984% more favorites, reactions, retweets or shares on Twitter and Facebook compared with their posts that didn’t mention the term (the average increase was 562%). Keywords related to immigration (“illegal immigrant,” “crisis at our southern border”) and foreign relations (“Syrian refugee,” “national security,” “China”) also boosted engagement in Republican posts in various years.

Certain key terms are used disproportionately by lawmakers from one party

Democrats and Republicans can also vary significantly in their use of language on social media: There are a number of terms that are commonly used by members in one party but rarely used by those in the other. These differences highlight not only how members in each party discuss issues using different language, but also how they may focus on different issues entirely.

A variety of terms related to diversity, equality and economic justice have been used by a majority of Democrats – but only a small share of Republicans – in their social media posts over the past five years. For instance, 96% of all Democrats have used the phrase “equal pay” on social media in the last five years, while just 13% of Republicans have done so. That makes “equal pay” one of the most distinctively Democratic phrases among members of Congress on social media, along with “LGBT” and “gun safety.” 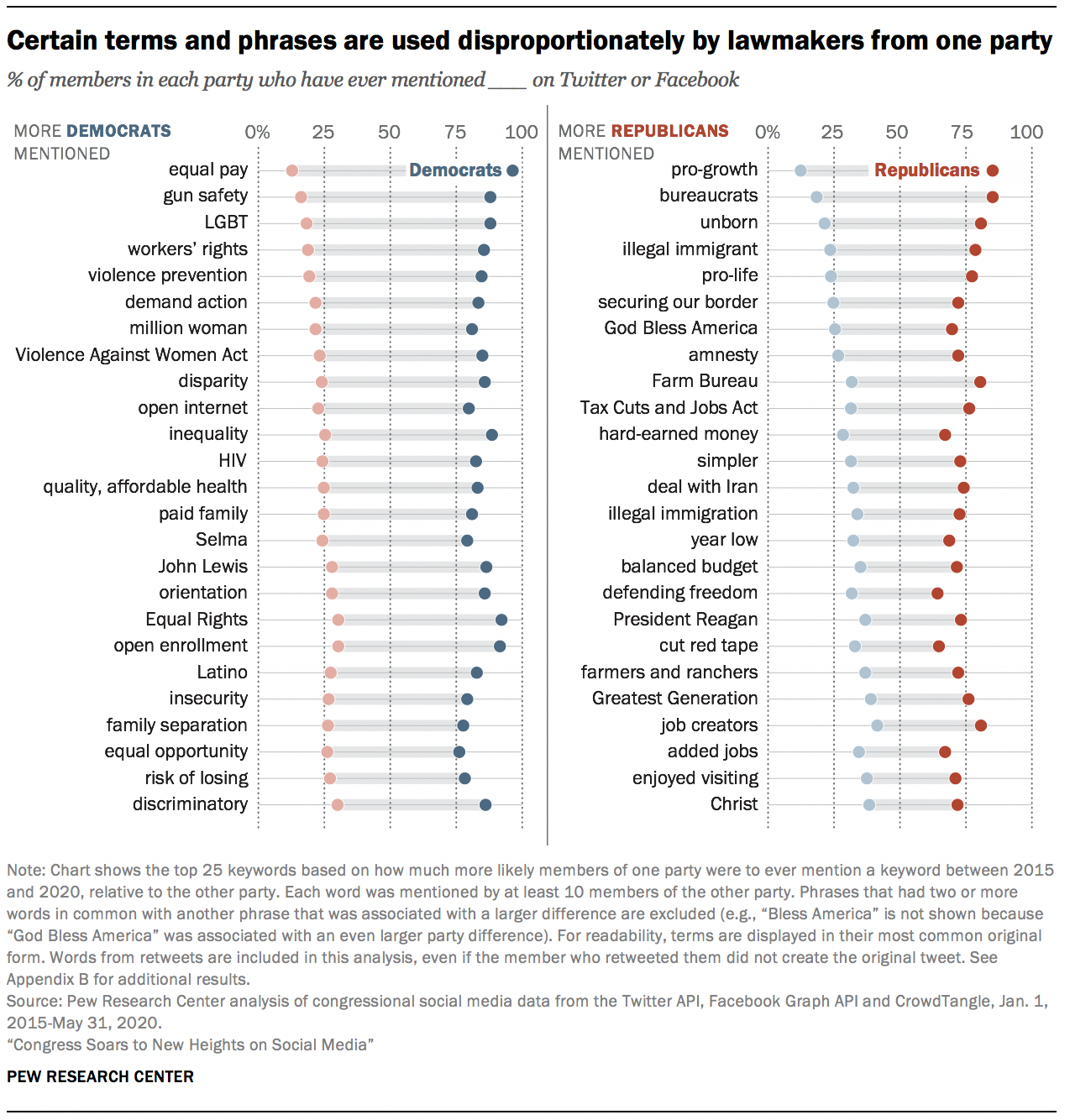