The social media environment is another prominent example of algorithmic decision-making in Americans’ daily lives. Nearly all the content people see on social media is chosen not by human editors but rather by computer programs using massive quantities of data about each user to deliver content that he or she might find relevant or engaging. This has led to widespread concerns that these sites are promoting content that is attention-grabbing but ultimately harmful to users – such as misinformation, sensationalism or “hate clicks.”

To more broadly understand public attitudes toward algorithms in this context, the survey asked respondents a series of questions about the content they see on social media, the emotions that content arouses, and their overall comfort level with these sites using their data to serve them different types of information. And like the questions around the impact of algorithms discussed in the preceding chapter, this portion of the survey led with a broad question about whether the public thinks social media reflects overall public sentiment.

On this score, a majority of Americans (74%) think the content people post on social media does not provide an accurate picture of how society feels about important issues, while one-quarter say it does. Certain groups of Americans are more likely than others to think that social media paints an accurate picture of society writ large. Notably, blacks (37%) and Hispanics (35%) are more likely than whites (20%) to say this is the case. And the same is true of younger adults compared with their elders: 35% of 18- to 29-year-olds think that social media paints an accurate portrait of society, but that share drops to 19% among those ages 65 and older. Still, despite these differences, a majority of Americans across a wide range of demographic groups feel that social media is not representative of public opinion more broadly. 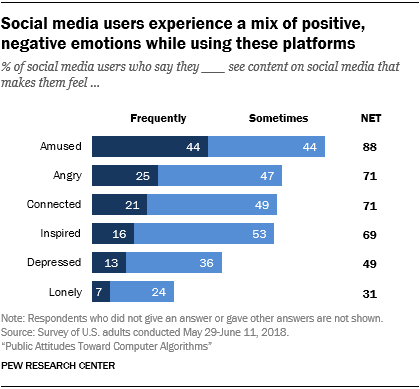 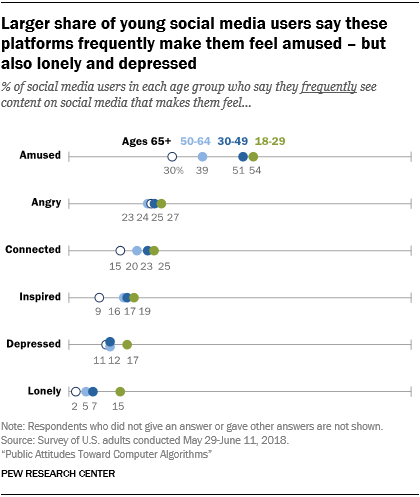 A recent Pew Research Center analysis of congressional Facebook pages found that the “anger” emoticon is now the most common reaction to posts by members of Congress. And although this survey did not ask about the specific types of content that might make people angry, it does find a modest correlation between the frequency with which users see content that makes them angry and their overall political affiliation. Some 31% of conservative Republicans say they frequently feel angry due to things they see on social media (compared with 19% of moderate or liberal Republicans), as do 27% of liberal Democrats (compared with 19% of moderate or conservative Democrats).

Along with asking about the emotions social media platforms inspire in users, the survey also included a series of questions about how often social media users encounter certain types of behaviors and content. These findings indicate that users see two types of content especially frequently: posts that are overly dramatic or exaggerated (58% of users say they see this type of content frequently) and people making accusations or starting arguments without waiting until they have all the facts (59% see this frequently). 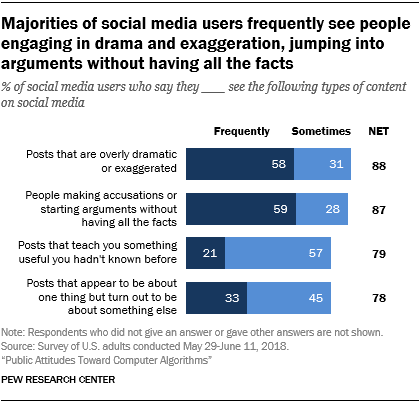 A majority of social media users also say they at least sometimes encounter posts that appear to be about one thing but turn out to be about something else, as well as posts that teach them something useful they hadn’t known before. But in each instance, fewer than half say they see these sorts of posts frequently. 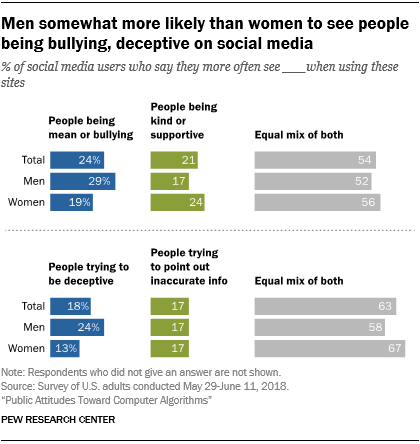 Previous surveys by the Center have found that men are slightly more likely than women to encounter any sort of harassing or abusive behavior online. And in this instance, a slightly larger share of men (29%) than women (19%) say they more often see people being mean or bullying content on social media platforms than see kind behavior. Women, on the other hand, are slightly more likely than men to say that they more often see people being kind or supportive. But the largest shares of both men (52%) and women (56%) say that they typically see an equal mix of supportive and bullying behavior on social media. 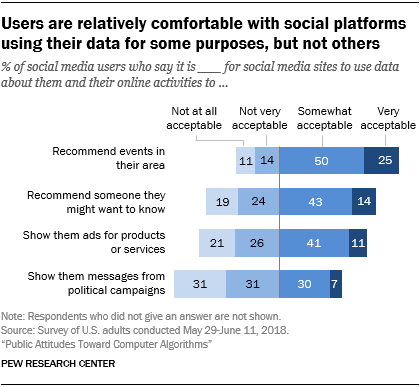 The vast quantities of data that social media companies possess about their users – including behaviors, likes, clicks and other information users provide about themselves – are ultimately what allows these platforms to deliver individually targeted content in an automated fashion. And this survey finds that users’ comfort level with this behavior is heavily context-dependent. They are relatively accepting of their data being used for certain types of messages, but much less comfortable when it is used for other purposes.

Three-quarters of social media users find it acceptable for those platforms to use data about them and their online behavior to recommend events in their area that they might be interested in, while a smaller majority (57%) thinks it is acceptable if their data are used to recommend other people they might want to be friends with.

On the other hand, users are somewhat less comfortable with these sites using their data to show advertisements for products or services. Around half (52%) think this behavior is acceptable, but a similar share (47%) finds it to be not acceptable – and the share that finds it not at all acceptable (21%) is roughly double the share who finds it very acceptable (11%). Meanwhile, a substantial majority of users think it is not acceptable for social media platforms to use their data to deliver messages from political campaigns – and 31% say this is not acceptable at all. 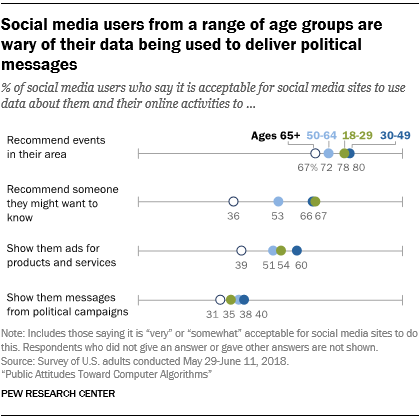 But outside of these specific similarities, older users are much less accepting of social media sites using their data for other reasons. This is most pronounced when it comes to using that data to recommend other people they might know. By a two-to-one margin (66% to 33%), social media users ages 18 to 49 think this is an acceptable use of their data. But by a similar 63% to 36% margin, users ages 65 and older say this is not acceptable. Similarly, nearly six-in-ten users ages 18 to 49 think it is acceptable for these sites to use their data to show them advertisements for products or services, but that share falls to 39% among those 65 and older.

Older users are overwhelmingly opposed to these interventions. But even among younger users, large shares find them problematic even in their most common forms. For instance, 71% of social media users ages 18 to 29 say it is unacceptable for these sites to change the look and feel for some users but not others.