While the main focus of this report is the prevalence and impact of specific harassing behaviors, the phenomenon of online harassment takes place within a broader context of negative experiences. This chapter documents three other categories of invasive or inappropriate behaviors people might encounter online: nonconsensual sexual imagery, untrue information and “emergent” forms of invasive and targeted abuse. Each of these topics has garnered a great deal of media attention and sparked conversations about the relative trade-offs of privacy and reputation online. For instance, high-profile incidents of nonconsensual sexual imagery have made headlines for featuring private photos of celebrities (or in a recent instance, members of the military) and testing the legal limits of state and federal law. But this survey finds that it is remarkably common for everyday people to encounter nonconsensual sexual imagery online.

Similarly, the spread of untrue information online was widely covered in the 2016 presidential campaign, which introduced both the broad phenomenon of “fake news” and striking examples of misinformation, such as “Pizzagate,” in which a Washington, D.C., pizza restaurant was falsely accused of harboring a child sex trafficking ring linked to Hillary Clinton. Most incidents of false information online do not command national attention, but many Americans have had problems as a result of untrue statements being posted about them.

Finally, some forms of abuse take advantage of digital vulnerabilities. Tactics like hacking or doxing exploit potential security weaknesses to obtain or publish personal information. Trolling and swatting are designed to overwhelm – the former by manipulating someone’s emotions or reactions, and the latter by calling in fake emergencies so authorities will unexpectedly arrive at someone’s house or other location. While many Americans are not aware of these behaviors, they have all been used to escalate abuse online. 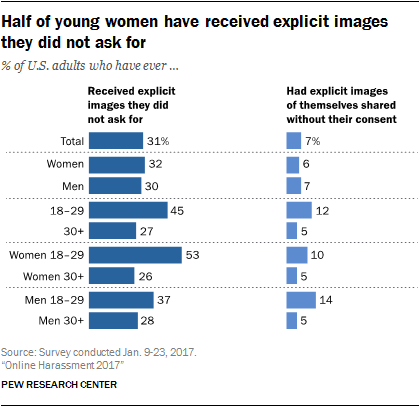 In their own words: Explicit imagery online

“Men trolling a friend’s sites by sending d**k pics through Messenger. Then when they didn’t reply the guy stalked them for a year online, commenting, sending more and more private and public messages. It was crazy. She had to block him on a number of occasions and at least once he made a new page with a semi-different spelling to his name.”

“Particularly with my female friends, there is a large amount of sexual harassment thrown at their online presences. Sometimes it’s lewd comments on a Facebook photo (even though the commenter is publicly visible), but the worst are on sites like Reddit where users are fully anonymous and they find out about my friends’ gender and begin sending harassing messages or sending lewd pictures.”

“Someone shared explicit photos of a friend of mine without her consent.”

“Someone posted explicit pictures of me without my permission on a ‘revenge girlfriend’ website.”

Meanwhile, young adults of both genders are more likely than adults ages 30 and older to have had explicit images of them shared without their consent (12% vs. 5%).

These experiences often go hand-in-hand with the other types of harassing behaviors discussed elsewhere in this report. Among those who have experienced severe forms of online harassment (such as physical threats, stalking, sexual harassment or sustained harassment), 63% have received unwanted explicit images, while 21% have had explicit images of themselves shared without their consent. 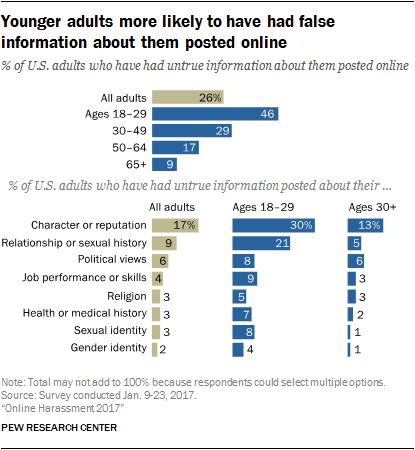 In terms of specific types of untrue content, younger adults are more than twice as likely as those ages 30 and older to say someone has posted untrue statements relating to their character or reputation (30% vs. 13%) or their relationship or sexual history (21% vs. 5%).

Overall, there are relatively modest gender differences on this issue. Similar shares of men (28%) and women (23%) say someone has posted something untrue about them online, and men and women tend to experience specific types of untrue content at largely comparable levels. However, a notable minority of young men report that others have posted certain types of untrue content about them. For instance, 11% of men ages 18 to 29 say that someone has posted false information online pertaining to their sexual identity (compared with 4% of similarly aged women and 2% of women as a whole). And 7% of these younger men say someone has posted something untrue about their gender identity (compared with 2% among younger women and just 1% of all women).

In their own words: Untrue information

“Someone said I lied about my degree. I was a poser. My husband of two months questioned me. Even my mother, who did not actually get to attend my graduation, questioned me. This person weaved a pretty convincing story.”

“I had to take back my business that I was selling to a couple and when they finally had to give it up, they spread rumors that I had been in jail for stealing and I was a meth head and selling drugs on the streets. Then they confiscated my Facebook and posted humiliating things that were going on in my business and that I was hiring some very offensive people to work in my school. And it kept up for about 6-8 months. They finally were run out of town … But they stole a credit card from the business and went on a very large spending spree before letting it go!!!!!”

“I have seen friends who had a disagreement spread lies and personal stories of one another.”

“A friend was the target of an organized campaign to label her a pedophile because they didn’t agree with her politics.”

“Libel – someone purposely made false statements about me and my business. Everyone who knows me knows these names were inaccurate. Problem is that people who don’t know me think the business has prejudiced employers/employees.

Roughly half of those who have had untrue information about them posted online have attempted to get it corrected or removed; about seven-in-ten were successful, though many found the process difficult 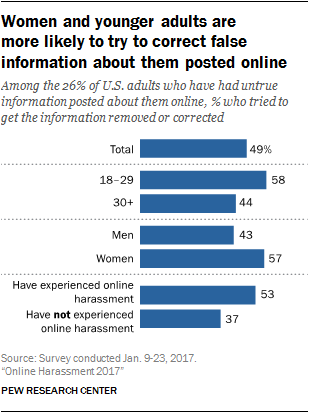 Certain groups are more likely than others to try to address false information that gets posted about them. Women are more likely than men to attempt to have this sort of information taken down (57% vs. 43%), and younger adults are more active in this regard than are those ages 30 and older (58% vs. 44%). Meanwhile, about half (53%) of those who have encountered online harassment have attempted to take down untrue information about themselves when it is posted online, compared with 37% of those who have not been harassed online in the past. 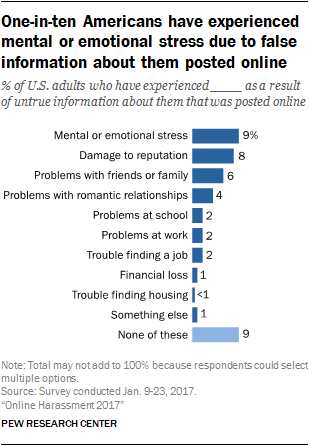 Younger adults – who, as noted above, are especially likely to encounter situations in which someone has posted untrue information about them online – experience many of these consequences at relatively high rates. Some 17% of 18- to 29-year-olds have experienced mental or emotional stress because something untrue about them was posted online (compared with 7% of those 30 and older). And comparatively large shares of young adults say that untrue information about them online has caused damage to their reputation (15%), problems with friends and family (12%), or problems with romantic relationships (11%).

Public awareness of some ‘emergent’ forms of online harassment is mixed 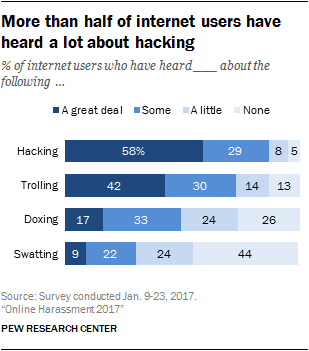 Beyond the other issues discussed in this report, the survey also asked about four “emergent” behaviors that have played a prominent role in recent public instances of online harassment. These include: