Technological innovation often unfolds at a pace faster than some people are able to embrace. When household electric service started to be widely available in the 1930s, many Americans, particularly in rural areas, were unsure whether they needed it. This led some providers to embark on extensive home-to-home marketing to urge people to wire their homes.1

More recently, as the internet and smartphones have spread through the population, adoption across population segments has been uneven. Pew Research Center recently reported that some users are unable to make the internet and mobile devices function adequately for key activities like looking for jobs. Communities face similar issues. Though the use of technology in schools has unfolded well in some places, problems have arisen where insufficient planning failed to take into account whether there was acceptance of new technology by all parts of the educational ecosystem.

These examples underscore two points about how new technology works its way through society: First, different people and institutions have varying levels of preparedness for using next-generation technologies. Second, this reality can result in varying levels of usage of new technologies as they diffuse in society. These differences can, in turn, ultimately raise the possibility that uneven adoption and use of technology could have negative consequences for those whose are not facile and comfortable technology users.

Since the late 1990s, inequalities in tech adoption have been characterized as the “digital divide,” and the focus has been mainly on the binary “haves versus have nots.”2 However, there has recently been a pivot in the technology adoption discussion that looks at people’s preparedness, such as their digital skills and their trust in technology, which may influence their use of digital tools, separate and apart from their access to them. The term often used to capture these factors is “digital readiness.”3 When organizations, such as libraries, think about digital readiness, it is usually about whether people have the skills to use information technology, as well as the digital literacy tools to help people determine whether the online information they access is trustworthy.4

This means that an operational definition of digital readiness includes several things:

How we measure digital readiness

Each of the three elements of digital readiness – skills, trust, and use – is measurable. Pew Research Center’s November 2015 survey captured the elements of digital readiness in the specific context of lifelong learning and the extent to which people use digital tools to pursue it. The questions described in this section served as the inputs to the typology that generated the five groups of those more or less “digitally ready” to use technology in personal learning.

For measuring skills, the survey asked:

How confident people are in using computers, smartphones or other electronic devices to do the things they need to do online:

How well this statement describes them: “When I get a new electronic device, I usually need someone else to set it up or show me how to use it.” 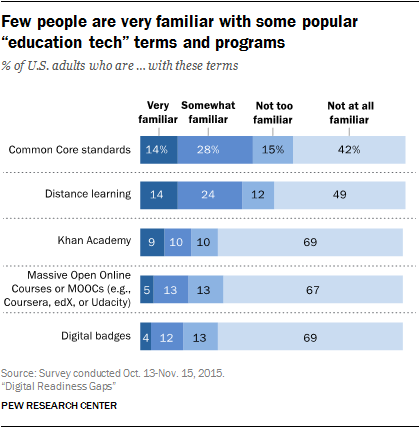 How familiar adults are with specific educational resources or concepts: As it turns out, there is not widespread public awareness of some of the key resources that are becoming available thanks to innovation online. Noteworthy majorities of Americans say they are “not too” or “not at all” aware of these things:

Overall, 28% of adults say they are very familiar with at least one of the five “ed tech” terms listed. This turns out to be an important indicator of whether a person has used the internet for personal learning.

On its face, asking people about their familiarity with educational technology terms may not seem to have much to do with digital skills. Yet asking people about their familiarity with tech terms has been shown to be a good proxy for their overall level of digital skills in a specific domain. In addition to seeking people’s perceptions of their skills, some surveys also ask about people’s degree of awareness of fairly challenging tech terms. If respondents are highly aware of these terms, experimental research shows that they are also very likely to be able to use the resources associated with them.5 This line of questioning, then, serves as an indicator of whether someone is inclined to pursue learning in an educational ecosystem that regularly requires the use of digital technology.

Additionally, our inclusion of “Common Core standards” as an “ed tech” term warrants explanation because the term itself is not explicitly tied to technology. However, technology is seen as embedded in the Common Core curriculum as a tool that is important for students to be able to use to master the skills and concepts that the Common Core aims to cultivate.6

How well the following statement describes them: “I find it difficult to know whether the information I find online is trustworthy.”

Each of these two measures were inputs to the typology.

In addition, the analysis of digital readiness in the context of personal learning also involves questions about people’s general attitudes toward learning. These included asking how well people thought these sentences described them:

Each of these questions were part of the typology’s input.

It is important to note that people’s technology access assets (e.g., home broadband subscriptions or smartphones) are not included as inputs to the typology. Although they are related to personal learning and tech use, the choice to have these tech gadgets is generally not the principle reason people decide to purchase them.

Next: 2. The spectrum of digital readiness for e-learning
← Prev Page
Page1You are reading page2Page3Page4Page5Page6Page7
Next Page →