In recent years, social media have become a common way for political groups and social movements to organize. On Twitter’s 10-year anniversary, the site published a list of the most used hashtags related to social causes. Two of the top three were directly related to issues of race. According to Twitter, #Ferguson was the most used social-issue hashtag in the 10-year history of the platform, while #BlackLivesMatter was third. 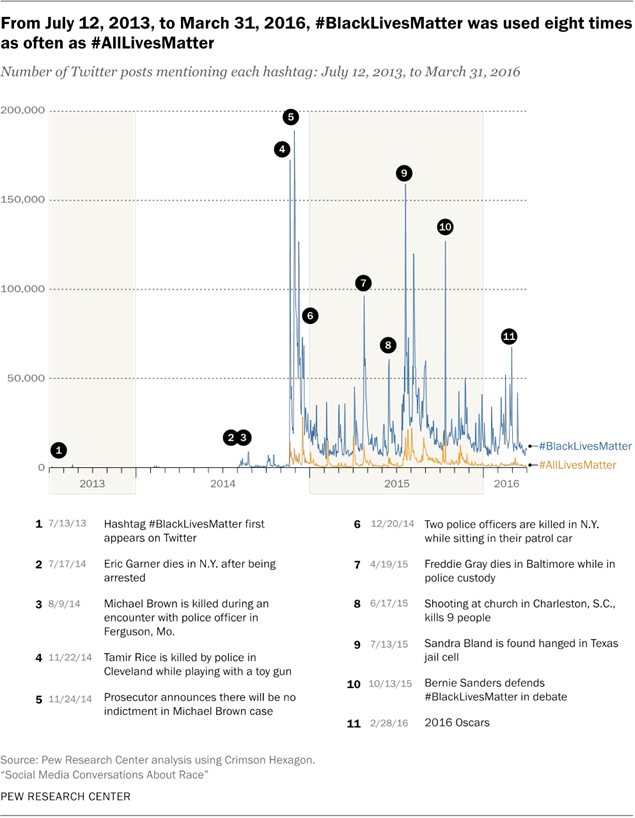 Along with examining tweets that mentioned race in a general sense, the Center’s analysis looked at all tweets that included the #BlackLivesMatter and #AllLivesMatter hashtags from July 12, 2013, to March 31, 2016. These tweets (13.3 million in total) were then analyzed using Crimson Hexagon’s algorithmic tool to determine their subject matter and tone. (A previous Pew Research Center study surveyed Americans on their awareness of and attitudes towards issues of racial equality.)

Historically, hashtags developed as an informal method of highlighting ideas in unformatted text and trying to grow conversation around a topic. In 2009, Twitter began to hyperlink and compile hashtags, making them searchable and increasing their utility as identifiers. While most hashtags are developed organically, some groups deliberately use hashtags to promote a message.

In mid-2014, as the issue of use of force by police gained national attention due to several high profile cases involving black men, some activists promoted hashtags as a way to identify their messages and display solidarity.

This was the case with the Black Lives Matter movement. Organizers of Black Lives Matter made social media – and specifically the hashtag #BlackLivesMatter – a centerpiece of their strategy. As a result, the growth of the movement offline was directly linked with the online conversation. 8

An early timeline of the #BlackLivesMatter and #AllLivesMatter hashtags

All told, from its initial appearance in mid-2013 through March 2016, the hashtag #BlackLivesMatter has appeared on Twitter almost 11.8 million times.

The phrase “black lives matter” was first used by a black community organizer in a Facebook post following the July 2013 acquittal of George Zimmerman in the shooting death of black 17-year-old Trayvon Martin. 9 Despite its widespread presence today, the hashtag was slow to gain prominence: During the second half of 2013, it appeared on Twitter a total of just 5,106 times (or about 30 times a day).

Both the use of the hashtag and the influence of the broader Black Lives Matter movement accelerated greatly in August 2014 when Michael Brown, a black teenager, was fatally shot by a white police officer in Ferguson, Missouri.

The #BlackLivesMatter hashtag appeared an average of 58,747 times per day in the roughly three weeks following Brown’s death. However, the use of the hashtag increased dramatically three months later when on November 25, the day after a Ferguson grand jury decided not to indict the officer involved in Brown’s death, the #BlackLivesMatter hashtag appeared 172,772 times. During the subsequent three weeks, the hashtag was used 1.7 million times.

Since late 2014, #BlackLivesMatter has been a continuous presence on Twitter, but its use has increased around some specific events. These include:

As for #AllLivesMatter, the hashtag appeared on Twitter a few times prior to the unrest in Ferguson in August 2014. However – as was the case with #BlackLivesMatter – it was the day after the announcement that there would be no grand jury indictments in the Michael Brown case when the hashtag began appearing regularly. On Nov. 25, 2014, #AllLivesMatter was used 14,308 times.

The day in which the hashtag #AllLivesMatter appeared the most during this time period was Dec. 21, 2014, the day after two police officers were killed in New York City while in their patrol car. That day the hashtag appeared 28,526 times. The hashtag #BlueLivesMatter, usually used to express support for police, was used 22,834 times that day.

The #BlackLivesMatter hashtag has been used frequently in support of the broader social movement or to flag general racial issues, occasionally as a form of criticism

From its first appearance in mid-2013, Twitter users have utilized the #BlackLivesMatter hashtag for a range of purposes. Supportive or positive references to the broader movement are among the most common. But in some cases, people included #BlackLivesMatter in tweets to criticize the movement – or simply identify the subject matter of their posts and attach them to the broader discussion occurring around racial issues. 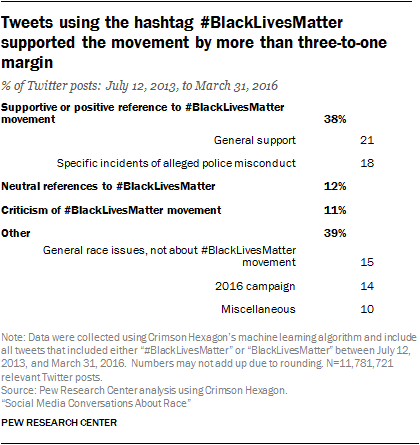 Slightly more than half of those, representing 21% of all the tweets using the hashtag, offered broad support for racial equality and opposition to police brutality. This February 2014 post by Mag-net, a network of social organizations, is one example:

#blacklivesmatter is a response to the dehumanization of black people. But it’s also a call to action. @aliciagarza #mediajustice

Others used the hashtag when describing efforts to organize protests, as in this tweet by Chicago-based activist Byron Sigcho:

Another 18% of tweets utilized the hashtag to connect specific incidents of alleged police misconduct. For example, a number of Black Lives Matter supporters focused on the November 2014 death of 12-year-old Tamir Rice in Cleveland, as in this tweet:

Among the other incidents #BlackLivesMatter supporters focused on were the April 2015 death of Freddie Gray while in police custody in Baltimore; the March 2015 shooting death of 19-year-old Tony Robinson at the hands of police in Madison, Wisconsin; and the contentious arrest of University of Virginia student Martese Johnson that same month.

Not all the uses of #BlackLivesMatter were directly tied to specific incidents. In 15% of the tweets using the hashtag, the author was making a larger point about race – without directly focusing on the modern-day social movement. For instance, many people offered thematic quotes:

A System Cannot Fail Those It Was Never Meant To Protect. #BlackLivesMatter

Variations of this particular quote appeared in tweets alongside the hashtag #BlackLivesMatter more than 2,200 times. This message, which first appeared in 2013, was often attributed incorrectly to the sociologist W.E.B. Du Bois.

As the Black Lives Matter movement grew and the use of the hashtag increased, a number of tweets began to object to the movement. Some critics felt it was valuing one race above all others, while others felt the movement was unfairly condemning all police officers based on the actions of a few.

In fact, 11% of the posts including the #BlackLivesMatter hashtag were critical of the movement and/or the actions of its supporters. Sometimes these posts utilized very strong language, as in this tweet by a retired solider:

Hey #BlackLivesMatter, police saves MORE black lives everyday, than you cowards ever will, in your pathetic lifetime! #AllLivesMatter ??

How the #AllLivesMatter hashtag was used: a more even mix of support and criticism

Unlike the #BlackLivesMatter hashtag, the mentions of #AllLivesMatter from July 2013 to March 2016 were nearly evenly split between positive and negative posts.

About one-third of #AllLivesMatter tweets were supportive of the general sentiment, but few focused on a larger movement 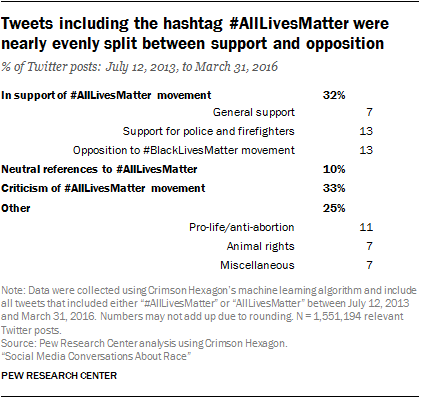 More tweets, 13%, were aimed at defending the people or organizations that were often criticized by #BlackLivesMatter – most often the police. For example, in September 2015, an account for the Office of the Lieutenant Governor of Texas Dan Patrick linked to a formal statement opposing violence toward police:

#AllLivesMatter & we must end violence against our law enforcement officers: http://t.co/zBQvznTVgT #TxLege

Another 13% of the tweets with #AllLivesMatter focused on condemning the #BlackLivesMatter movement.

One-third of tweets with #AllLivesMatter were critical of its meaning

To critics, #AllLivesMatter was a minimization of the concerns of minorities, especially in regards to issues of police brutality and discrimination.

#AllLivesMatter gets used by other movements

While the vast majority of the use of #AllLivesMatter was in reference to conversations on race, several other movements used the hashtag in different contexts.

About one-in-ten (11%) tweets with #AllLivesMatter were used by someone opposing abortion. Many of those were connected with the 2015 controversy involving videos that purported to show wrongdoing committed by the health services organization Planned Parenthood. In January 2016, one user tweeted:

Another 7% of tweets were used to promote animal rights, sometimes in support of vegetarianism. Musician Kristin Star expressed this sentiment in November 2014:

Next: 4. Major recent events bring #BlackLivesMatter back to the forefront as the tone shifts overnight
← Prev Page
Page1Page2Page3You are reading page4Page5Page6Page7
Next Page →