For the 33% of Americans who do not currently have broadband service at home, financial concerns – the monthly cost of a broadband subscription most prominently, but also the cost of a computer – loom large as barriers to non-adoption. At the same time, for many non-broadband users who own a smartphone, the functionality of these mobile devices makes traditional broadband a lesser priority. Still, other non-adopters indicate that they have options for online service outside their home, or that suitable broadband service is hard to get in their area. 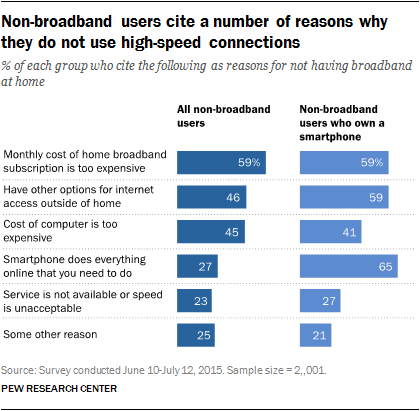 Most non-users point toward multiple reasons for why they do not have high-speed service at home. The typical (median) non-broadband user cites two reasons for not subscribing to home broadband service, while 43% list three reasons or more.

In some form, cost is the chief reason that non-adopters cite when permitted to identify more than one reason they do not have a home high-speed subscription. Overall, 66% of non-adopters point toward either the monthly service fee or the cost of the computer as a barrier to adoption.

When presented with a follow-up question asking them to identify the most important reason they do not have a home broadband subscription, non-adopters are again more likely to cite the monthly cost of broadband service than any other reason. Smartphone users differ in that the capability of their smartphone rivals the monthly cost of broadband as the main reason they go without service. 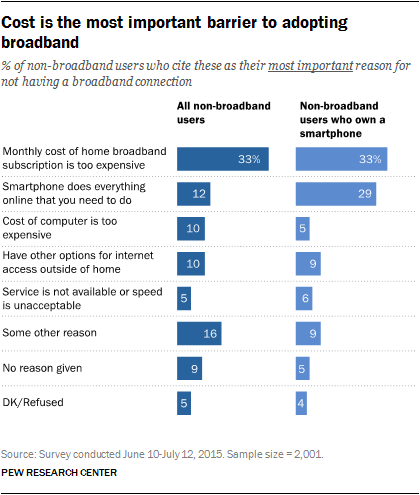 Price sensitivity – the sense that the monthly fee is too much – is a larger concern for non-adopters who are more likely to recognize the importance of a home high-speed connection. As noted earlier, two-thirds (65%) of non-adopters in 2015 say that being without broadband at home is a major disadvantage of some sort – an increase from 48% who said this in 2010 across the same five subject areas. Among the 2015 group of non-adopters who see lacking broadband as a major disadvantage, 38% cite price as their main barrier to adoption. This compares with just 22% who cite the monthly service fee as their primary barrier among non-users who do not see home broadband service as particularly critical.

The inverse relationship is worth emphasis. Many more non-adopters in 2015 say that being without broadband is a major hindrance in some way than said so in 2010. As this view of the importance of a home high-speed subscription has grown, so has the sense that the monthly fee is the sticking point in having home service.

A majority of non-broadband users have never had broadband at home, and just one-quarter of them are interested in getting it in the future

The survey asked non-broadband users whether they ever had service at home and whether they have interest in subscribing in the future. Those who answered in the negative for both questions – that is, those who have never had broadband in the past and do not have an interest in subscribing to service in the future – come to 46% of all non-adopters. They fall into the “hard-to-reach” category of non-adopters, not only because of their stated preferences and past behavior. They also, demographically, contrast sharply with other non-adopters on characteristics that align with a low likelihood of home broadband adoption. The “hard-to-reach” are: 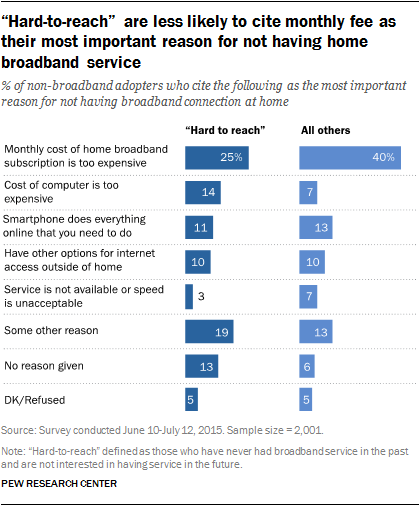 The other notable characteristic of the “hard-to-reach” is that they are less likely to cite the monthly access fee as their most important reason for not having service.

Barriers to smartphone adoption: Cost is cited most frequently as the main reason people do not have a smartphone, though many say they simply do not need one

One-third of Americans do not have a smartphone. These are the reasons they provide when asked to identify the main reason they do not have this type of device:

The reasons cited are very similar to what non-smartphone users said in 2012, when 45% of adults had a smartphone.