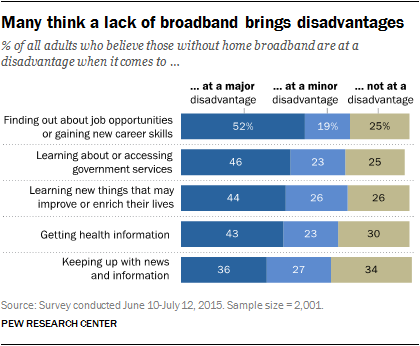 As these shifts in technology adoption patterns are unfolding, Americans are increasingly likely to view home broadband service as important to accessing information or carrying out a variety of important tasks. A substantial majority of Americans feel that people without home broadband service are at a disadvantage when it comes to keeping up with news or information, getting health information, learning new things, accessing government services or engaging in a job search. Indeed, 52% of Americans feel that non-broadband adopters are at a major disadvantage when it comes to accessing job opportunities or improving their career skills. Approaching half (46%) say lacking broadband is a major disadvantage for accessing or learning about government services.

Taken together, 69% of Americans believe that people lacking broadband at home are at a major disadvantage in at least one of these five areas (getting news and information, getting health information, learning new things, accessing government services or looking for job opportunities).

Not only do most Americans say that not having a broadband subscription at home is a major disadvantage, but more say this in 2015 than was the case in 2010.

More than half (56%) of all adults in 2010 said not having broadband was a major disadvantage in at least one of these areas – a figure well below the 69% level for 2015 in the same five areas of inquiry.

African Americans, Hispanics and young adults are generally more likely to view the lack of home high-speed access as a major disadvantage in various facets of people’s lives. For African Americans, this is true particularly for getting health care information and learning about or accessing government services. Among Hispanics, the difference is largest, relative to the average, for learning about things that might improve or enrich their lives.

In general, non-broadband adopters are less likely to see the lack of a home broadband subscription as a major disadvantage when compared to broadband users. But at the same time, these non-adopters are substantially more likely to view a lack of broadband service as a disadvantage than was the case in 2010. In some cases, such as for accessing government services and keeping up with news and information, the share of non-home high-speed users who see not having service as a major disadvantage has grown markedly since 2010. In fact, the bulk of the overall increase since 2010 in Americans’ views about the importance of broadband is attributable to increases among home non-broadband users.

In 2015, 65% of non-broadband households say not having service is a major disadvantage in one of the five areas listed in the chart above. That compares with 69% among all Americans and 70% for those in households with a broadband subscription.

By contrast, in 2010, 48% of respondents without a home high-speed connection said the lack of service was a major disadvantage; that compared with 56% among all adults and 61% for broadband households.

Scrutinizing those numbers closely suggests that non-broadband households, over the five year time interval, showed a larger growth in the sense that not having a home high-speed connection conferred disadvantages. In fact, the growth in the share of non-adopting households seeing the lack of broadband as a disadvantage is more than twice the rate of that for broadband adopters – a 35% to 15% margin. 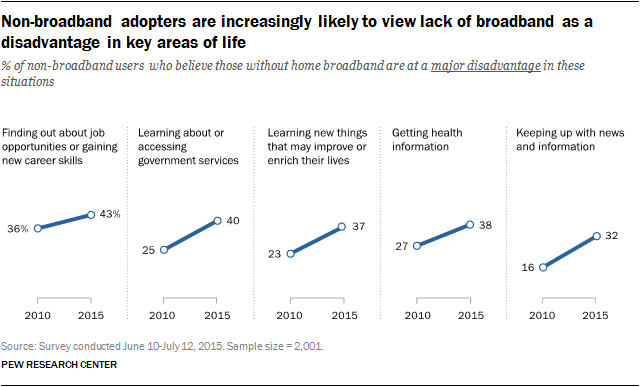 Next: 3. Barriers to broadband adoption: Cost is now a substantial challenge for many non-users
← Prev Page
Page1Page2You are reading page3Page4Page5Page6Page7Page8
Next Page →