The rest of this report will explore these two categories of harassment in terms of the groups they impact, the online environments in which they occur, and the emotional and personal repercussions they produce.

The level and intensity of harassment that people face online breaks down along a number of demographic lines. 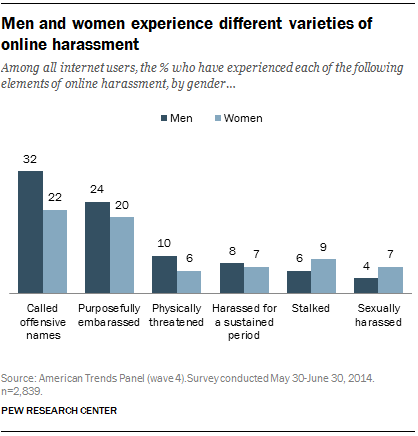 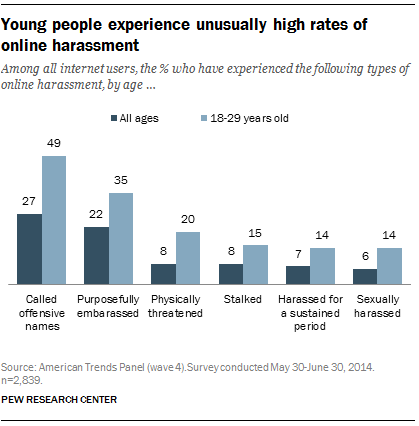 Harassment occurs among all age groups, but it is especially prevalent among younger adults. Some 65% of internet users ages 18-29 (and 70% of those ages 18-24) have experienced some type of harassment online.

The youngest internet users, those ages 18-24, are particularly likely to say they are targets of some of the more severe kinds of harassment. Almost a quarter, 24%, have received physical threats. Some 19% have been the target of sexual harassment. Another 17% have been harassed for a sustained period of time.

Online harassment is especially pronounced at the intersection of gender and youth: women ages 18-24 are more likely than others to experience some of the more severe forms of harassment. They are particularly likely to report being stalking online (26% said so) and sexually harassed (25%). In addition, they are also the targets of other forms of severe harassment like physical threats (23%) and sustained harassment (18%) at rates similar to their male peers (26% of whom have been physically threatened and 16% of whom have been the victim of sustained harassment). In essence, young women are uniquely likely to experience stalking and sexual harassment, while also not escaping the high rates of other types of harassment common to young people in general. 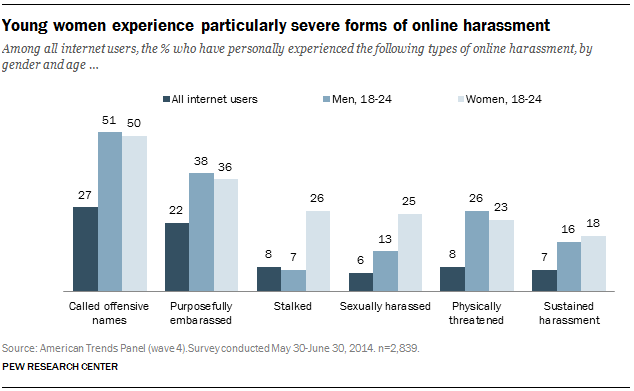 Throughout this report, some of the most compelling comments from open-ended questions about online harassment will be featured. Respondents were asked to describe their most recent experience and their answers ranged from simple phrases like “on Facebook” to detailed accounts of disturbing encounters. Here is a selection of insights from respondents who said they were called names or otherwise harassed for expressing political or religious opinions.

“Through social media, and especially when commenting on controversial issues, often my difference of opinion from others would result in those who do not agree insulting and berating instead of arguing their point respectfully.”

“While commenting on a sensitive religious feminist issue, I was attacked because of my opinion and some of the other commenters resorted to name-calling in their anger.”

“On Facebook, a few days ago, I expressed my feelings about present issues and was harassed and called names. Of course there were not substantive arguments—just judgmental, harsh name calling.”

“I have been ridiculed for my religious and political beliefs.”

“Nothing major, just banter on a political discussion board. I view it as a badge of honor – usually means I made my point well when there is nothing left to say other than name calling.”

“Folks with different views would rather throw names than discuss real issues.”

“Someone has tried to embarrass me for my social views (but I am pretty good at defending myself, so no worries).”

“Just aggressive responses to my post in the politics section of the forum I visit. I really know better – nobody changes their mind based on something they read on an internet forum.”

“Someone didn’t like a comment I made about their post about Obamacare. I pointed to facts I don’t think he knew about so he called me an idiot and said I had no idea what I was talking about.”

“I am a strong supporter of LGBTQ persons. I’ve been invited to leave my church and start my own gay/lesbian church.”

“Just name calling because I don’t support Obama policies and occasionally get accused of being racist.”

“Someone asked me what my views were on a topic, gay marriage. I knew they didn’t want to know what I thought and tried to steer away from the topic. The person wouldn’t drop it and I eventually said, ‘I leave the situation up to the voters, but my personal belief is marriage is defined by one man and one woman.’ They then went into how I should be ashamed to be, ‘a f*****g intolerant right wing racist bigot.’”

“I am constantly attacked on gun control as recent as the police shootings and the shooting across from diner in Walmart.”

“Every time I say something in favor of the President I get called all kinds of names.”

“Attacks by Obama supporters who have nothing else but insults. I was called a racist on a blog for criticizing administration lies.”

“A person whose political opinion I disagreed with told me that I should punch myself in the face and that if I didn’t do it good enough he’d come and take care of it for me.”

“When I expressed disagreement with some of the core concepts of contemporary feminism (Rape Culture, privilege, toxic masculinity, etc.), any feminist who doesn’t already know me has been quick to characterize me as a privileged, misogynistic rape apologist.”

“Name-calling for my pro-life stance online.”

‘While tweeting about a woman’s right to an abortion I was viciously harassed by numerous pro-life supporters.”

“I was called names by right-wing Facebook trolls. Since they can’t stand on their ideas, they feel they have to call names and belittle.”

“My Democrat brother chewed me on [a] Facebook political post and I reminded him I’d fight to the death for his right to disagree with me.”

Those who weave the internet more tightly into their daily lives report higher levels of online harassment.

A number of non-demographic factors are also associated with whether or not someone has experienced harassment online. Put simply, those who live out more of their lives online—whether for work, pleasure, or both—are more likely to experience harassment.

Respondents answered three questions about lifestyle, both online and off, that may contribute to a closer proximity to online harassment in general.

A portion of jobs in America require self-promotion and sharing of personal information online, but for some that comes with a cost. Among the 21% of employed internet users who need to market themselves online as a part of their job, almost half, 48%, said they had experienced online harassment. This compares with 38% of those who do not need to market themselves online for their job.

Next: Part 2: The Online Environment
← Prev Page
Page1Page2You are reading page3Page4Page5Page6Page7Page8
Next Page →