As previous work from Pew Research has shown, most technology users feel positively connected to the services and devices that connect them to others. It is not, however, a relationship without tension. Many users sometimes feel stressed by their constant connectivity (for example when their cell phones distract or interrupt them) or vulnerable when they consider privacy trade-offs.

Building on this knowledge, two series of questions on this survey were designed to understand the specific context in which people may interpret online harassment. The first series examined how harassment might be tied to anonymity, criticism, and social support in respondents’ online and offline worlds. The second series was designed to prompt respondents to think of how welcoming they perceive various online platforms to be toward men and women.

Internet users observe criticism and anonymity more online than in their offline lives, but they also witness more support of one another. 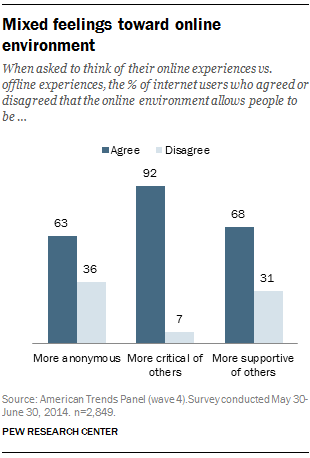 In open-end responses detailing their experiences with online harassment, a recurring theme emerged about how respondents feel anonymity online allows people chances to be cruel.

“Cowards hiding beyond a keyboard and the anonymity the internet provides were verbally abusive.”

“A disagreement in a chat…people are 10 feet tall and bullet proof behind a screen.”

“In college some girls I didn’t get along with created fake email accounts and sent me nasty, harassing emails and instant messages, and also posted harassing anonymous comments on my blog.”

“People who disagree acting out in ways that would never be acceptable when dealing with someone in person.”

On the issue of criticism, a number of the open-end responses highlighted how “people are just mean online sometimes.”

“People just like drama and online is the easiest place for it.”

“Just offensive name calling which most of the time I ignore and move on.”

“Just someone being rude.”

“The way they talk very rude they don’t care if they hurt others feelings.”

Friendliness Toward Men and Women on Different Digital Platforms

Most online environments are seen as equally welcoming toward men and women; the exception is online gaming.

When internet users were asked for their general impressions of how friendly various online platforms were to men and women, most perceived them to be equally welcoming to both genders. 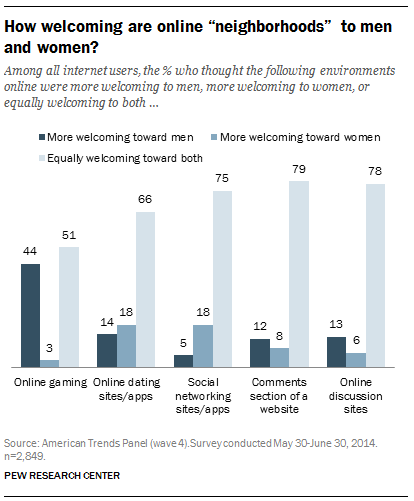 Almost four-in-five internet users felt that discussion sites like reddit and the comments section of a website were equally welcoming to both sexes (78% and 79%, respectively). A minority felt these environments were more welcoming toward men than women, 13% and 12%, specifically.

Across all the neighborhoods, those under 50, particularly those 18-29, were more likely to see differences towards men and women in the atmospheres on these platforms.

Different online platforms have various user bases, reputations, and customs. The prevalence of online harassment in these online “neighborhoods” varies significantly. The 40% of internet users who had ever been the target of online harassment were asked to think about their most recent experience and indicate where that experience happened (totals add to more than 100% because respondents were allowed to choose multiple responses):

Social networking sites and apps are a particularly popular online platform. Their popularity with younger internet users is especially tied to the high incidence of online harassment on social media sites and apps.

When asked to elaborate on their most recent experience with online harassment in their own words, respondents often described events on social networking sites.

“I was harassed and threatened through messages and comments on my Facebook page.”

“I had someone use Facebook to try to spread nasty rumors about me.”

“Someone was not happy with something I posted on my Facebook, and tried to get me to remove it and when I would not they got angry and called me dirty names.”

“An old ‘friend’ of mine found me on FB and used inappropriate language to describe me and another old friend of mine. I asked him to stop but he didn’t, I had to block him so he would stop disturbing me.”

“Someone called me a bad name over social media.” 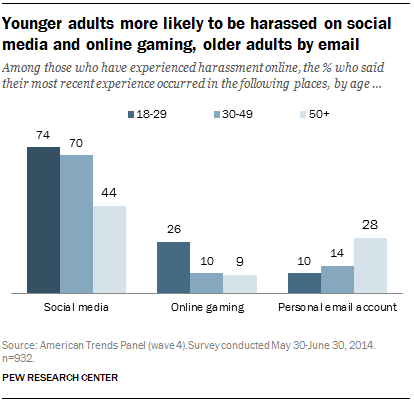 Those ages 50 and older who have experienced online harassment were particularly likely to say their most recent incident occurred via a personal email account. Some 28% of those 50 and older said so, compared with 12% of those. 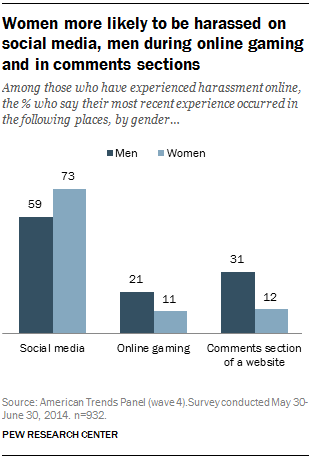 In the open-ended comments from respondents, experiences with harassment and online gaming mostly came down to “sore losers” and name-calling. Many respondents easily brushed off the negativity.

“Someone was a sore loser in an online game and hurled threats and insults.”

“Nothing bad just someone didn’t like how I was playing a game. The good thing is, on the computer, you can just leave!”

“When someone is losing a game, the opponent will abruptly leave but not without calling me or others a vulgar name or comment.”

“A standard bully-type came into a video game broadcast that a friend of mine and I run and made offensive comments at the two of us, mostly referring to our breasts.”

“This happens too regularly in online games to remember a specific occurrence.”

Who Are Online Harassers?

Half of those who have been harassed do not know the person involved in their most recent incident.

In addition to gaining a deeper understanding of where harassment is occurring online, this survey also sought to gain insight into who is responsible for these experiences.

Respondents were again asked to think about their most recent experience with online harassment and indicate who was involved (respondents were allowed to select more than one answer). A plurality (38%) said that the source of their harassment was a stranger, and another 26% said that they didn’t know the real identity of the person or people involved. Taken together, half of those who have experienced some type of harassment do not know the person or people involved in their most recent experience.4

Among known perpetrators, acquaintances and friends were the most common types. Almost a quarter, 24%, of those who have experienced harassment said their most recent incident involved an acquaintance. Another 23% said it involved a friend. Family members were less frequently cited, at 12%. Previous romantic partners were named by 10% of those who have been harassed, and co-workers were identified by 7%. 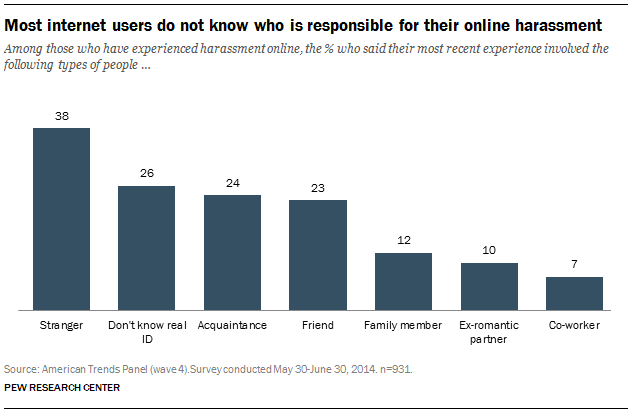 Men who have experienced harassment were more likely than women to say their most recent incident involved a stranger, 44% vs. 32%. Similarly, 33% of men said they didn’t know the identity of the person involved, compared with 20% of women. This may be tied to the nature of the environments in which men report experiencing online harassment. Both gaming and the comments section of a website are places where identifying yourself is not a requirement for participation. In other words, both environments largely operate on anonymity.

Some 27% of women who have experienced online harassment said their most recent incident involved an acquaintance, somewhat higher than the 20% of men who said the same. Women were also more likely to say a family member was involved, 16% vs. 8% of men. Again, this may reflect the environments in which women are most likely to experience harassment: Social media activity is built around strong ties (family) and loose ties (acquaintances), and some platforms require people to participate with their real name.

Young people, those ages 18-29, who have experienced online harassment were more likely than any other age group to say their most recent incident involved a friend. Almost three-in-ten, 29%, said so. This is unsurprising considering how much of young people’s social lives plays out online. They were also more likely than those 50 or older to cite an acquaintance, 29% vs. 17%.

Open-end responses: Who are harassers?

In comments where the person responsible was discussed, “family drama” was frequently noted.

“A family member unhappy with my decisions is threatening my family.”

“Adult son making rude comments because he feels he is being treated unfairly. Jealously, senseless!”

“It was a situation between my sister and I…we had a verbal altercation because of decisions she made and she took to Facebook to call me all kinds of names.”

“The family of my late husband posted things to me – hurtful things. Eventually they stopped when I ignored them and blocked them.”

“I was being stalked by an ex and had to report it to the police.”

“Internet stalking (checking up on me) that led to staking in real life by an ex.”

“An Ex-gf who was really upset with our break-up chose to post offensive things about me online in a number of places.”

“I have been experiencing frustration with a former girlfriend of my boyfriend’s stalking me. She has been able to locate where I work, my email address, personal cell phone number. She sends text messages on a weekly basis and threatens me.”

“I had a former partner continually trying to contact me after I broke things off. When he couldn’t reach me, he started having friends message. Eventually I changed my information and converted all my posts to private.”