Mobile phone owners like the convenience and ease of connectivity, but rue that they can be interrupted more easily, have to pay the bills, and face bad connections.

Some 85% of American adults now own a cell phone of some kind, and these devices mean many things to their owners: an always-available link to friends and family, a pocket computer, or a time-saving tool — even an actual telephone. When asked to describe in their own words what they like most about owning a cell phone:

The word cloud below illustrates some of the more common responses to this question:

However, the convenience and constant connectivity that these mobile devices offer also comes with a downside in the form of annoyances, interruptions, and cost. When asked what they like least about owning a cell phone:

The word cloud below illustrates some of the more common complaints: 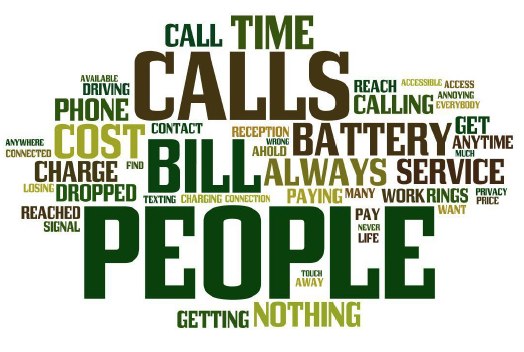 Overall, cell owners are far more likely to view their phone as a time-saver than as a time-waster. Some 33% of cell owners agree with the statement that their phone “saves you time because they can always access the information you need,” while just 3% agree with the statement that their phone “costs you time because you are constantly being distracted or interrupted.” The largest proportion of cell owners (56%) say that the time costs and time savings offered by cell phones pretty much balance each other out.

Cell owners are extremely attached to their phones — although most don’t see that as too big of a problem.

For many cell owners, their phone is an essential utility that they check frequently, keep close by at all times, and would have trouble functioning without:

Despite this connection to their devices, most cell owners don’t worry too much (or get many complaints from their friends) about spending too much time with their phones:

Indeed, many cell owners hear complaints from friends that they don’t devote enough time to monitoring their mobile communications:

Mobile phone users see some drawbacks to cell ownership, but in general are positive about the benefits that mobile connectivity provides.

When asked to assess the impact of their cell phone on various aspects of daily life, cell owners see some clear benefits — particularly when it comes to maintaining connections to friends and family:

On the other hand, relatively modest numbers of users see a downside to cell ownership in the form of increased distractions and difficulty disconnecting from work life: 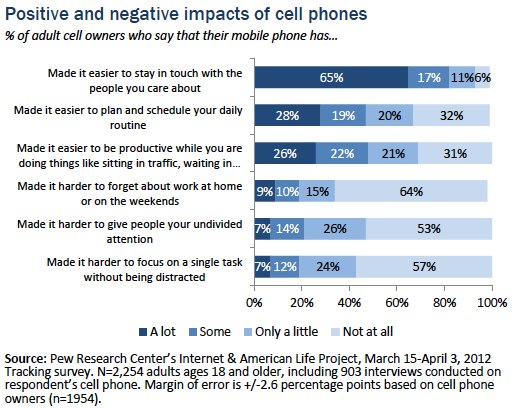 Two groups consistently stand out when it comes to their usage patterns and attitudes relating to their mobile phones — the 45% of American adults who own a smartphone and the 17% of cell owners who do most of their online browsing within the context of their mobile phone (referred to throughout this report as “cell-mostly internet users”). Compared with other cell owners, these individuals are more likely to sleep next to their phones; to check their phone frequently for messages or alerts even though they didn’t hear a notification; and to engage in a wide range of mobile activities such as accessing social networking sites or doing online banking.

To be sure, both smartphone owners and cell-mostly users share certain demographic characteristics that are correlated with mobile attitudes and usage patterns. For example, young adults are heavily represented in both the smartphone and cell-mostly populations — and as we will see throughout this report, younger cell owners differ from their elders in a number of ways. However, both smartphone ownership and “cell-mostly” usage each show a strong impact on a range of attitudes and behaviors even after we control for other demographic factors, such as age, income, education, or gender. 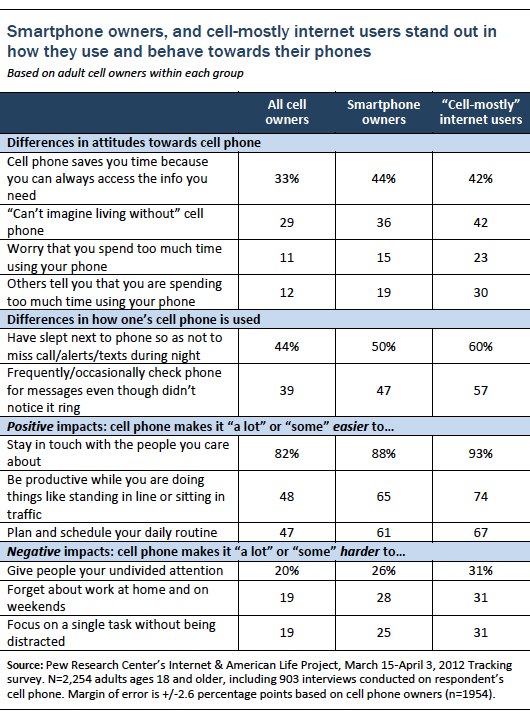 For the 40% of adults who own a cell phone but have not yet upgraded to a smartphone, economic factors play a more significant role. Some 37% of non-smartphone owners cite cost as their main barrier to adoption, although 29% indicate that they have refrained from upgrading because they “don’t need” a more advanced phone. Digital skills and technical literacy issues also play a role in whether or not someone purchases a smartphone, as 9% of non-smartphone users say that they have not upgraded because smartphones are too complicated and/or they don’t know how to use them. 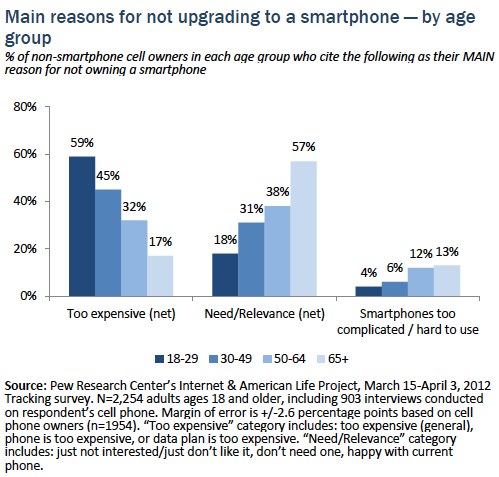 Next: Part I: The Good and Bad of Cell Ownership
← Prev Page
You are reading page1Page2Page3Page4Page5Page6Page7
Next Page →