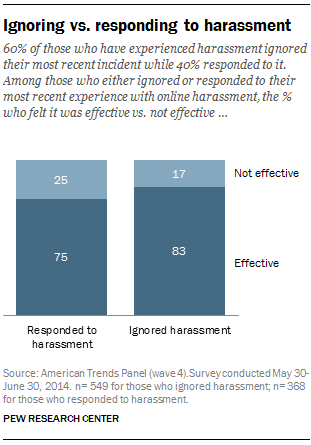 People who experience online harassment employ a variety of tactics in response. Some simply ignore the behavior. Others respond directly on the platform, or notify website administrators. Some employ offline methods and involve law enforcement. Whichever option is chosen, the large majority of people are satisfied with the outcome.

When asked to think of their most recent incident, 60% of those who have experienced online harassment said that they elected to ignore the behavior. When asked if they felt ignoring it was effective at making the situation better, 83% answered affirmatively and 17% were not satisfied.

A portion of respondents in the open-end comments brushed off online harassment as “nothing too major” and often chose to ignore it.

“Nah, I do not generally care about what people say online, as it has nothing to do with real life.”

“Too much to relate really: It is a general characteristic of the medium and environs – hence I visit sparingly and do not comment or interact online if I can help it. It feels like bottom-feeders are the norm online, in my experience.”

“Same person kept harassing me on a Facebook group for an extended period of time. Threatening me, calling me names, etc…But I know the person is just some random “troll” (you need to know what that means on the internet) and I didn’t take it seriously. Online harassment does not faze me. People should learn not to get offended by silly things.”

Some 40% of those who have experienced online harassment took some sort of action in response to their most recent incident, ranging from direct confrontation to engagement with law enforcement.

When asked if they felt that any of the steps they took were effective at making their most recent situation better, three-quarters of those who responded to online harassment said they did. A quarter were still not satisfied.

There were few demographic differences between those who took various steps in response to their online harassment, with two key exceptions: women and those under 50 who responded to their harassment were more likely than their counterparts to unfriend or block the perpetrator. Some 55% of women did so, compared with 34% of men and 49% of those under 50 unfriended or blocked someone, compared with 27% of those over 50.

For some, responding to harassment is a relatively straightforward affair. Forty-nine percent of those who responded to their recent harassment incident took a single step. But others engaged in a more multi-faceted response, as 48% took multiple actions in response to their most recent experience. Indeed, some 8% of online harassment victims report taking four or more of these specific actions.

As noted in Part 1, online harassment exists along a spectrum of severity. Of those who have been harassed online, some 45% have experienced especially severe forms of harassment (these include physical threats, sexual harassment, stalking, or harassment over a sustained period of time). They tend to have a much different response to their most recent harassment incident compared with the 55% of harassment victims who have only experienced less severe versions of these behaviors (i.e., name-calling and embarrassment).

Besides the response steps listed, a number of respondents in the comments reported that they confronted the person face-to-face. Others brought the problem to the attention of other authority figures, like lawyers or managers at work.

“Talked out the problem.”

“Reported it to a supervisor at work.”

“Confronted at work and eventually terminated.”

Next: Part 4: The Aftermath of Online Harassment
← Prev Page
Page1Page2Page3Page4You are reading page5Page6Page7Page8
Next Page →