Internet and broadband adoption rates among seniors are steadily increasing, but still well below the national average 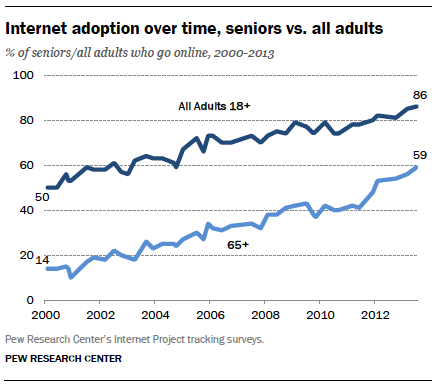 Six in ten seniors—59%—report using the internet. This is a six percentage point year-over-year increase from the 53% of older adults who went online at a similar point in 2012. Five years ago in May 2008, just 35% of older adults were internet users. However, usage rates among seniors still trail the population as a whole by a substantial margin, as some 86% of all U.S. adults now go online.

Younger, higher-income, and more highly educated seniors use the internet and broadband at rates approaching the general population

Despite these low overall levels of usage as a group, certain portions of the senior population have internet and broadband adoption rates that are equal to—or in some cases greater than—rates among the general public. Three particular types of seniors tend to stand out in this regard: 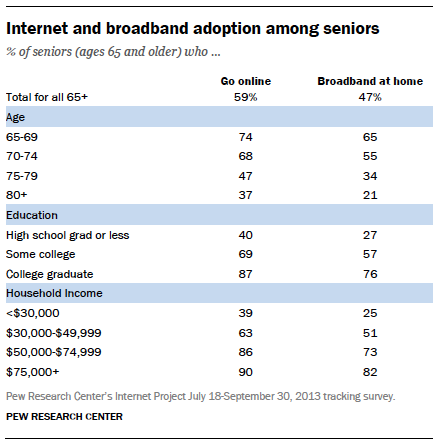 On the other hand, other subgroups of older adults—in particular, those 80 years of age or older, those with low household incomes, and those who have not attended college—tend to be much more removed from online life. For example, slightly more than one third of those 80 years of age or older (37%) use the internet, and just one in five members of this age group—21%—have a broadband connection at home. Overall adoption levels are similar among seniors who have not attended college, as well as among those with an annual household income of less than $30,000 per year.

Mobile adoption: A substantial majority of seniors now own cell phones, but smartphones remain rare within the 65-and-older population

Fully 77% of seniors are now cell phone owners. This trails the national average—91% of all Americans own a cell phone—but represents a significant year-to-year increase over the 69% of seniors who owned a cell phone in April 2012. More notably, cell phones are now owned by a majority of seniors in every major demographic subcategory. Even among the oldest seniors (those 80 years of age or older, just 37% of whom use the internet), cell phone adoption sits at 61%. 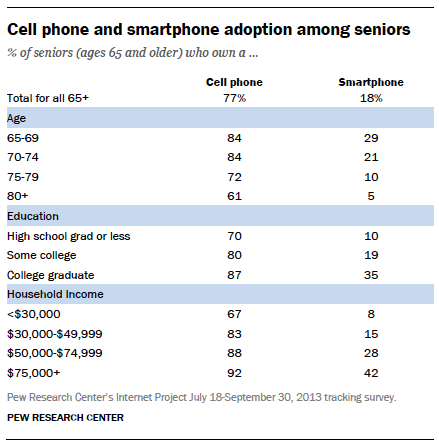 As is the case in the population as a whole, tablets and e-book readers are primarily “elite” devices among older adults 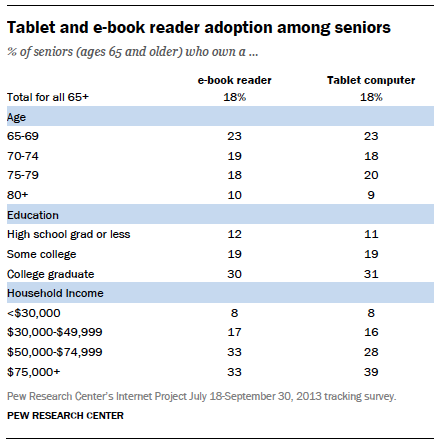 Nationally, tablets and e-book readers are most popular among college graduates and higher-income Americans, and this is also true among seniors. Seniors who have graduated from college are around three times as likely to own both an e-book reader and a tablet as are seniors who have not attended college, and those with an annual household income of $75,000 or more per year are around four times as likely to own each device as are those with a household income of less than $30,000 per year.

46% of online seniors use social networking sites, but just 6% use Twitter 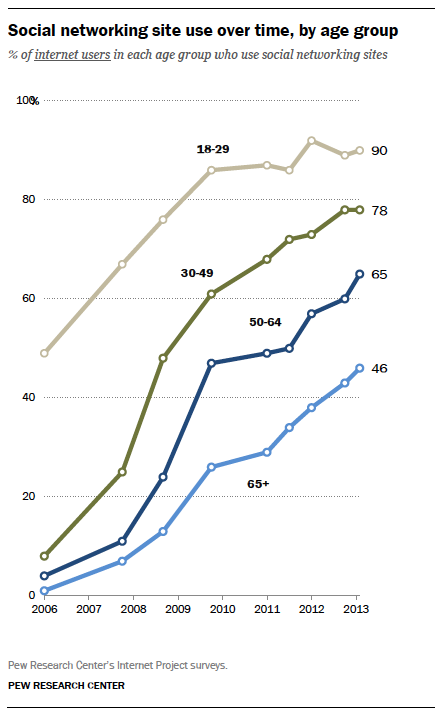 Few older adults use Twitter—just 6% of online seniors report doing so, compared with 19% of all adult internet users. In total, that means that just 3% of all American seniors are Twitter users.

Next: Attitudes, Impacts, and Barriers to Adoption
← Prev Page
Page1You are reading page2Page3Page4Page5
Next Page →